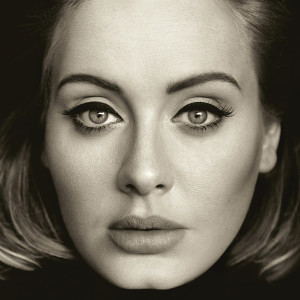 Yesterday, in an act of great injustice, the federal government exonerated a corrupt chief tax collector who perpetrated the singling out of Americans for persecution based on their ideas. Yesterday is also the day Adele released her new single, “Hello”.

The haunting song, written by Adele with Greg Kurstin, masterfully expresses emotions which correspond to what I think are predominant feelings of our times. This lament of one’s past captures what it feels like to want to cry out against what’s gone wrong in the world.

The pared down production, simplicity and restrained power of her voice, which wails about being on the outside, give the melancholy tune an undeniable power. It’s superficially about a former lover, yet the song from Adele’s forthcoming album, 25, is an introspection. It’s as though she’s reflecting upon herself, a sense affirmed by Xavier Dolan’s dramatic, black and white, retro music video co-starring the perfectly cast, boyish Tristan Wilds (watch the video here).

The sparse “Hello” loops a melody in Adele’s vocals featuring whispers of piano, background vocals, electronica, strings, percussion and some chillingly timed bells. The effect is a sense of distance, loss and detachment laced with an eerie foreboding; the lyric suggests that the days are numbered. But this tune, as with In the Lonely Hour by Sam Smith, does not wallow in self-pity, pain and anguish. “Hello”—and this is why I think it reflects modern frustration, troubles and hardship—is a plaintive, wounded howl at the way things are and the way things are going. An undercurrent of struggle and strength in Adele’s soulful voice suggests that the singer has not given up. Musically, vocally and lyrically, there is no hint of defeatism; there is a sense of purge in her pleading acknowledgement of the past. Adele’s vocals do not overpower—she sings more like Whitney Houston than like Jennifer Hudson screaming in Dreamgirls—which serves the tune’s theme. It begins as a greeting and becomes an attempt to admit, fix and right what is wrong.

That “Hello” comes in a week of historic victories for corruption in American government—as one of America’s most alarming income tax scandals goes unchecked and unbalanced and one of the most explicit attacks on free speech, when the government blamed an Islamic terrorist attack on September 11 on a movie, with evidence that the secretary of state (Hillary Clinton) knew it was not caused by a movie but said so anyway, goes unpunished—is, of course, coincidental.

I know that a pop song can mean more than the song. It can reflect and define the times. A song well done captures a mood or sensibility. The youthful weariness of “Hello”, which, like its title, is a greeting girded by benevolence, erupts in a wail at the way things are and the way things are going. “Hello” may entirely endure for its hook, ability and production. It yearns for a past “when we were younger and free” and cries out for better days knowing that “at least I can say that I’ve tried.” In the most basic sense, it’s a song about losing one’s love. In a deeper sense, it could be a song about losing one’s civilization, down to the last lyric that it doesn’t seem to matter anymore—imbued with the sense that it’s all that matters anymore.