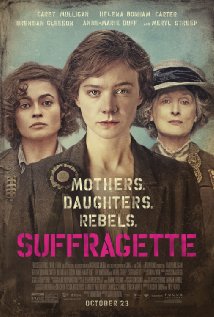 Suffragette is a haunting portrayal of woman as activist.

Depicting an often silent, secret sisterhood bonded by women’s shared endurance of oppression, director Sarah Gavron, who discussed the movie at a screening I recently attended, layers several characters deftly created by writer Abi Morgan (The Iron Lady) and delivers an emotionally powerful elegy to the feminine rebel. Carey Mulligan (The Great Gatsby, Public Enemies) as a composite, not true to life, character is marvelous in the lead.

Mulligan carries the movie, which can be cold, distant and slow. Also, and this is important, to what extent Suffragette in its final estimates is based on history is dubious, probably wrong, and the picture’s feminist bent, which glorifies terrorism as a tactic, distorts the truth of injustice against women. It is difficult to pinpoint the source of this problem in Suffragette, as it is not always apparent in any movie whom to credit or blame, but the role of the British suffragette movement for “votes for women” in obtaining individual rights or similar or equal treatment under the law for women is exaggerated, possibly to fantastic proportions. Suffragette makes a real, causal connection which most likely does not exist, a matter for historians to address, and it welds progress for the rights of women to collectivism, anti-capitalism and altruism when, in fact, the opposite is true.

But its heroine, Mulligan’s Maud Watts, is Suffragette‘s best case to the contrary. Maud is a worker, a wife and a mother and, without proper historical exposition, the movie subtly puts her front and center of the British women’s suffrage movement. She herself is a victim of a terrorist attack on private property on London’s posh West End at the film’s beginning in 1912 and she is accordingly disposed against such initiation of force. Maud is also a victim of abuse by a male boss at the laundry where she works, so she seeks to express herself through protest and exercise her right to free association with the militant women, led by a medical practitioner played by Helena Bonham Carter (Cinderella, Alice in Wonderland, The King’s Speech), known as suffragettes (the terms suffrage, suffragist and suffragette are neither addressed nor explained).

She wants to live as an individual with rights. For this reason, it is Maud above the rest in whom the moral of the violent story resides. Though Gavron’s gray London cinematography, blurred action scenes and wordless signals keep an emphasis on action, or on “deeds, not words”, Maud Watts becomes a distinctive character, presence and heroine. While her husband teaches son George to worship a government leader, whose portrait hangs in their modest home, Mrs. Watts, like others who become aware of the law’s unequal treatment of certain people, is rightly skeptical of the state. Like a congressman calling out to the president from the floor of Congress, the suffragettes shout “Liar!” to a government spokesman. Their intellectual leader, portrayed by Meryl Streep (Into the Woods, The Giver, Hope Springs, The Iron Lady), openly seeks to “incite” women to “defy this government”, which ought to evoke today’s Tea Party activists and cause leftists to think twice. Streep’s cameo includes a line which reflects the movie’s Patrick Henry-inspired moral theme that it is better to “be a rebel than a slave.”

As this applies to giggling, politically indifferent and impish Maud Watts, whose treatment by police, boss and husband don’t so much cause her radicalization as affirm her conviction that there is no halfway point between subservience to the state and advocacy for her own rights, a weary, sad story animates her decline and liberation. It is enhanced with a penetrating and powerful score by Alexandre Desplat. It is underscored by the relationship between Maud and a grizzled police chief played by Brendan Gleeson (Green Zone). Gleeson, too, is magnificent in every scene with Mulligan. Theirs is the core of marking the success of Suffragette‘s somewhat transparent activism, though writer Morgan adds depth and dimension to several characters and pairings, including Maud’s sharp moral judgment of a heroic wealthy woman named Alice, powerfully played by Romola Garai (Atonement, Rory O’Shea Was Here), which leads to the picture’s most rational and poignant act of heroism; a rescue made possible by the mutual bond of understanding between Alice and Maud.

There are nods to martyrdom, collectivism and altruism—a funeral banner emblazoned with praise for sacrifice “for others”—yet there is also a profound recognition for the unique alienation that accompanies the full awareness and knowledge, commitment and fortitude of one who lives by ideals that come too soon for this life, or too late by another measure. With a reverent line about the serenity of being able to project the future of “those that shall follow you” in the march of the unconquered and persecuted toward progress for civilization, and disclaimed with a fact check of history, Suffragette is a moving depiction of a woman transformed from working stiff to the radical who thinks and acts upon her principles.