Purging ‘the devil’ inside is the catalyst in the musical Rocketman. Paramount’s movie about rock star Elton John’s life in songs unfolds in an exaggerated, though not preposterous, recreation of reality complete with dancing, singing and stylized, cinematic theatricality. It’s as bedazzled as you’d have reason to expect it to be. 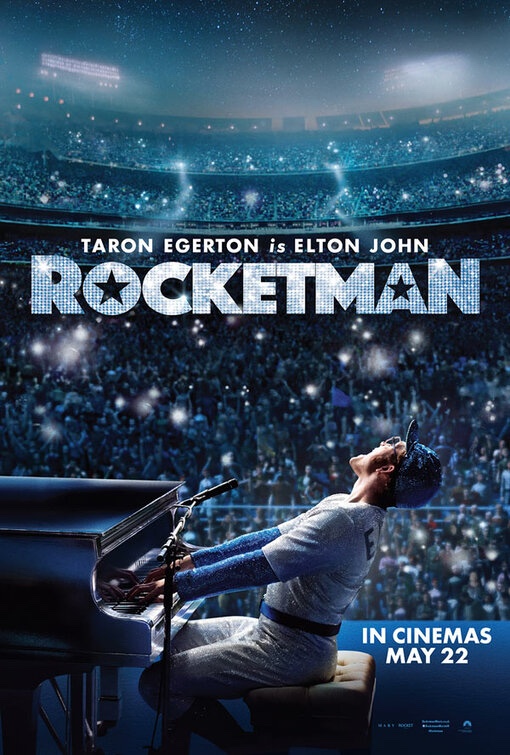 Rocketman is more intimate than you think, however. More so if you know, contemplate and mine Elton John’s songs and the facts about his life. If not, you may still enjoy the movie, but only if you take it on its terms and none other. Rocketman, like La La Land, may be an acquired taste; this picture (like that other picture, which is 2016’s best picture) is not an overly sentimental or polished depiction of what it means to strive to express oneself as an LA artist.

Like the singer and songwriter’s singular tributes to Marilyn, Diana and his namesake, John Lennon, each destroyed in their prime, Elton John’s musical about his life shows what it means to grind, hurt and “still feel the pain of the scars that won’t heal”, to borrow a line from one of his hit songs. Rocketman dramatizes the brittle, wretched cost of infamy, stardom and fame. It is unyielding in this sense. It is also uncanny.

Screenwriter Lee Hall (War Horse, Billy Elliot, Victoria & Abdul) and director Dexter Fletcher, with Elton John’s apparent endorsement, move through the stages and keys of his life, if not entirely the catalogue of his music (how could they?) with tact, deft and ruthless editing, lighting and stagecraft. The result is sensational. So is Taron Egerton in the lead.

Rocketman takes off as a musical — strictly framed in the subject’s songs — about the whole man. Unlike other movies about real people, this one revolves around more than a streak of egoism.

“I want to get better,” Elton John plainly says at an early point in the film. The rest plays out from there, from his curiosity about his father’s recording of Count Basie and navigating toxic parents to his inner rage — “The Bitch is Back” — and onward. Whether his first kiss from one who sees in him his true self or a colleague’s advice to kill the self you seek to transform so you can become who you want to be, Elton’s ego is central.

A duet of “Streets of Laredo” gives that song its due for the first time since Bang the Drum Slowly (1973) borrowed pathos and the title’s phrase; its carefully framed scene gently lays the foundation for the most loving one in Elton John’s life: Bernie Taupin (Jamie Bell in a warm, equally perfect performance). But the magic, memory and wonder of Rocketman will depend on your experience of these songs in your life, if any. If you’ve never heard them, you are in for a fabulous treat.

From the spine-chilling discovery and delivery of “Your Song” to deep and abiding love and admiration in Bernie’s eyes, and back around to the ache of a gay man’s (really, any one’s) unrequited love for the unattainable, Fletcher and Hall integrate egoism into Elton’s pain points. Then, they wrap the picture neatly, almost prayerfully, in what matters about the one who was once a pudgy, unloved boy named Reg; that, like Scarlett in Gone With the Wind, the child’s on the outside looking into what’s eluding his life.

Liberation, i.e., tagging, owning and loving himself, through the hard work of achieving intimacy, this is the legacy of Elton John’s music and life, caught with care and attention to detail here. Pardon the bad wigs. Forget that no one can fully recreate Elton John in his signature (nor breathtakingly handsome Bernie Taupin). Everything works to serve the story, not the other way around. This is an awesome achievement. Even Bryce Dallas Howard as the mother shines.

Rocketman, from choreography, photography and every element of design to poignantly, ingeniously conceived plot points such as “Crocodile Rock”, “Honky Cat” and “Goodbye Yellow Brick Road”, fulfills its theme that selfishness is virtuous. When someone accuses Elton of being selfish in a climactic scene of dramatized introspection, his response cleverly embeds a rejection of both underlying morality and rendered judgment.

“Real love’s hard to come by, so you find a way to cope without it,” Elton says about drugs and suicidal tendencies coiled in keeping up appearances and faking reality, which nearly everyone pushes him to do.

While Rocketman doesn’t sugarcoat these details, it also isn’t stingy in depicting what it means to save the life which is your own. In lavish and elaborate production numbers, Rocketman shows what Elton John’s done to struggle, melt down, frolic and rise, float and align with his surroundings as he’s propelled to new heights. It revels in the sense of alienation expressed in the song which is its title’s springboard, “Rocket Man”.

Rocketman spins, curves and adorns the extremely difficult, emotional and nuanced art of living. Through a selection of the artist’s songs of life, the immensely watchable and magnetic Rocketman lights up the arc of Elton John’s life, from learning what’s poisonous to embracing himself. You’ll feel elevated, crushed and empowered. You’ll know what it feels like for the man who creates and happens to be gay and trapped by anger, drugs and alcohol for repressing himself. Clarity is Rocketman‘s aftereffect. And it radiates pure Elton John.