The newest motion picture about 1969’s mindless, mass murdering hippies aims for feminist equivocation of the women who committed the crimes. As such, its bloodstains cannot be removed. But director Mary Harron (American Psycho) shows ability in tackling a difficult subject.

In fact, Harron’s ability to depict the female monster gets in the way of the film’s feminist revisionism. At the conclusion of the movie’s first scene, the face of one of the monsters appears in the shower. It’s as ugly and blank as one would expect from a butchering murderess, which is essentially what opens Charlie Says.

Charlie Says, as the title implies, is about the hippie commune led by Charles Manson at a movie ranch in metropolitan Los Angeles. The commune is the perfect model of New Left ideals, chiefly that one can’t know reality. Harron, working from a screenplay by Guinevere Turner, dramatizes this ideal in grisly, horrifying detail.

The extent to which the audience is familiar with the mass murders by the hippies indoctrinated, trained and ordered by religious leader Manson may determine its impact. As it is, the murders are at once graphically depicted and substantially minimized. By showing certain flashes of the crimes’ most heinous aspects, Harron is able to concentrate audience attention on the women who repeatedly stalk, bound, torture, pulverize and stab their upper middle class and wealthy victims.

By de-emphasizing that the victims, mostly women who were targeted by New Left female hippies for being upper middle class and wealthy, and by stressing that the Manson Family females were abused by a male cult leader, Charlie Says downplays the nature of the crimes and the guilt of the criminals.

Instead, Charlie Says counters that one of the women, Leslie Van Houten (Hannah Murray), makes a post-conviction breakthrough through collaborating with a women’s studies scholar in prison. Feminist intellectual Karlene Faith (Merritt Wever), offering to teach female Family members feminist literature and philosophy, presumably lets these self-described “earth mothers”, each of whom sought by adult consent to join Manson’s Family to “let go of [her] ego”, to liberate themselves from patriarchy. 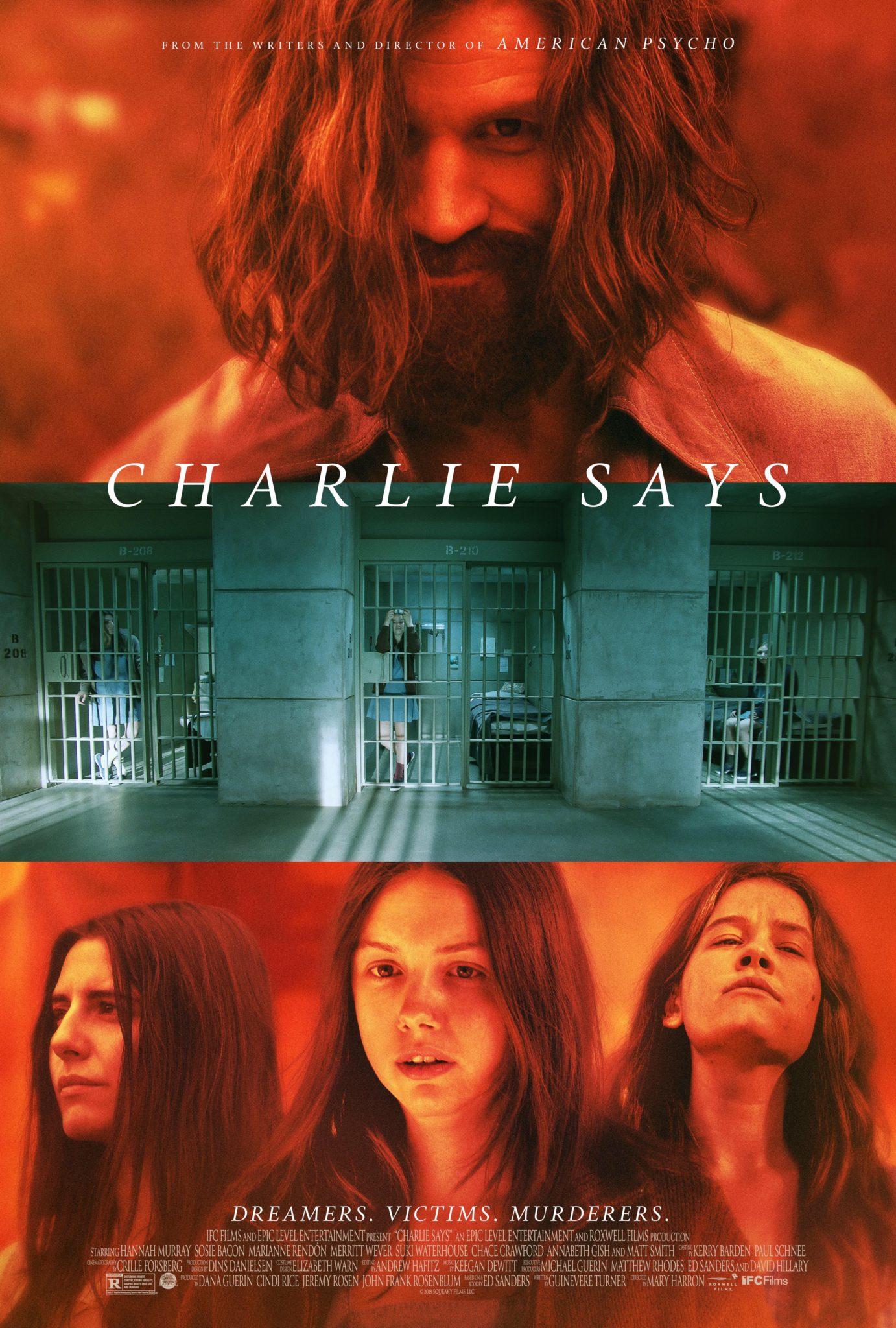 This is the problem with Charlie Says, which neither properly dramatizes their supposed transformation nor properly accounts for the women’s exercise of free will. What it does do, culminating in the hippies’ mass murder of several innocent Southern Californians, most famously actress Sharon Tate, is capture the essence of America’s nosedive in 1969.

Dumpster diving in Hollywood, vegetarianism, Manson’s wannabe rock rants, complete with nihilistic lyrics and song titles, and the power players, such as the Beach Boys’ Dennis Wilson and Doris Day’s son Terry Melcher, who flirted with the hippies long enough to mingle with the monster — it’s all here in chilling, numbing and disturbing detail. So is the agony of natural childbirth at the Family’s cult compound at Spahn Ranch, led by a horny old blind man named George Spahn, whose complicity is an interesting if utterly ignored subplot. Charlie Says is filmed with a style that’s virtually indistinguishable from the deadness of McCabe and Mrs. Miller.

Above all, Charlie Says painstakingly shows that the hippies’ hedonism, and its corollary, religionism, was among the laziest and most obvious conformist applications of the status quo. Pick your poison of shopworn ideals, from the Communist chic of “everything belongs to everyone” as a newborn baby is taken from the mother for the collective to references to Jesus Christ, Virgin Mary and Holy Communion (with hallucinogenic drugs). When someone tells one of the newer hippies in Manson’s compound that “you don’t have to think” it is clear that you do have to believe.

Indeed, the film’s supposed female savior falsely claims that she wants “to give [Manson’s female hippies] back themselves” and asks the prison warden and others to take her on faith. In this sense, feminist Dr. Karlene Faith (an adviser on the film), not unlike Charles Manson, demands that women be treated based on sex, not as individuals with minds of their own.

For the heavy-handedness in laying blame on Manson (perfectly portrayed by Matt Smith, nailing Manson’s rambling, singsong nasality) for being male, Charlie Says at least depicts that it was a trio of men on motorcycles who came to the woman’s rescue and it was the female who chose to evade the evidence that she was annihilating her own mind and existence.

Charlie Says shows hippie Van Houten becoming aware of her nihilism, the philosophy of nothingness which came to define and dominate American culture. And this underscores that nihilism undergirds today’s cynical culture in everything from The Simpsons and South Park to Seinfeld and Breaking Bad, Avengers, Game of Thrones and scads of movies, TV shows and recordings based on the death premise.

You do not have to look hard to find the spread of nihilism that precipitated 1969’s Manson Family, such as the 1967 movie adaptation of Truman Capote’s prize-winning In Cold Blood, but you should read Vincent Bugliosi’s exemplary legal-historical document (with Curt Gentry) Helter Skelter to know, grasp and account for the full extent of the evil of the late 1960s, when America started to go straight to hell.

When Charlie Says was first announced by Epic Level Entertainment, which has focused on horror, it was touted for expressing a relevant contemporary theme “aligned with the Me, Too movement“, according to the company’s press materials. The feminist-themed movie fails as apologia for the women’s mindlessness that led to the mass slaughter of victims such as Tate, Abigail Folger and Rosemary and Leno LaBianca.

But it’s to director Mary Harron’s credit that Charlie Says shows the horror of faith and the exercise of free will by vacant females in action … which no amount of feminist rationalization can eradicate or erase.