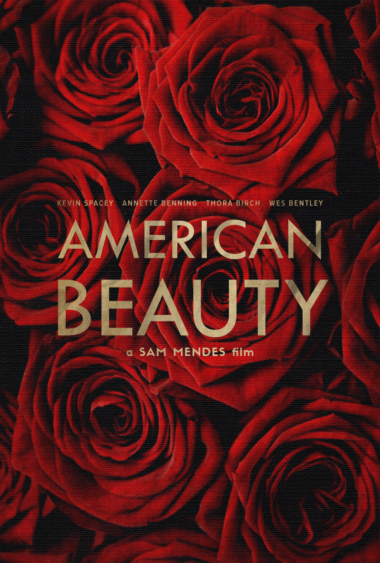 The biting and finely crafted and acted American Beauty directed by Sam Mendes (Road to Perdition) is a fantastic film about the modern failure and folly of the American Dream.

Under narration by a character played by Kevin Spacey (Se7en, The Shipping News, The Usual Suspects) in what may be his best performance, the two-hour movie tracks several characters which revolve around three main characters in a single American middle class family.

Spacey’s frustrated husband and father hates his work, his marriage and his life. His wife (Annette Bening, Regarding Henry) is a vacuous real estate agent and their daughter (Thora Birch) is an angry and insecure teenager. Their new next-door neighbors (Chris Cooper and Allison Janney) are also married with an only child (Wes Bentley). American Beauty is exactly as tidy as I’m making it sound.

American Beauty is more involving than you might think. By tapping the currently predominant cultural trend, nihilism, which Mendes overlays with light strokes of pseudo-romanticism and pretty actors, animation and pictures, he infuses the film with a sense of possibility. This is ultimately false but it is nevertheless inviting. Mendes, in his feature film debut with the fraudulent title, makes the audience complicit in his movie about America’s impending doom.

This is his movie’s hook; that you, the audience, by watching and going along with the opening scene’s homemade video — in which an off-camera narrator asks a vapid, bored teenager: “want me to kill your dad?” — are part of America’s spiral. By engaging an audience steeped in cynicism, he skillfully fulfills his own artistic goal. If you’re infected with the contaminated rot of today’s American culture, from decades of Simpsons, vampires, thugs, gangs, Sopranos and Seinfeld to living every day as if you think the ideal is impossible and your bad mood runs your life, you’ll come away from American Beauty thinking it’s positively ingenious.

That it’s not, that it simply depicts an intellectual satire imposing a distinctly European sense of life on American life, resulting in the movie’s absurdism, which definitely mirrors real life, is accessible only to the uninfected, the clean, the few, those who are not yet the pod people. Yet even these people can see the cleverness of what he’s made. With an opening shot over a Midwestern suburb with a Chicagoland area code, and an embittered voiceover by Spacey’s dead protagonist, American Beauty unfurls its ugly depiction of America’s vanishing sense of life.

Everyone’s as miserable as Spacey’s character by dinnertime. Xylophonic cues signal that it’s safe to fixate and hate this sordid film’s juicy takedown of everything decent and American, which makes it almost seem OK that an occasional act of decency is treated as an act of heroism. Like a TV show about plane crashes, or dysfunctional family, or bitchy ex-wives, the slathered on production values and top-notch cast keep you watching the vainglory. Keep looking for meaning, the narrator and special effects seem to tease, the wreck is coming and it’s not just a trick.

And that the wreckage doesn’t end the world does have a certain sense of relief, like the feeling when you pass a car wreck that at least it wasn’t you, as Stephen King once explained. That Spacey’s unhappy husband and father lusts after his daughter’s very pretty cheerleader Angela Hayes (Mena Suvari) — unleashing his fantasy and the film’s theme of roses from his frigid wife’s garden — merely sets up the climactic bundling of the movie’s multiple subplots.

Everyone plays their part to a tee here. From Scott Bakula and Sam Robards as the gay lawyer and doctor couple upending the modern Ozzie and Harriet or Cliff and Clair version of the American Dream to Kevin Spacey as perpetually horny Lester Burnham. All the names concocted by macabre screenwriter Alan Ball (who went on to create Six Feet Under) or Mendes have that cutesy quality. Take the only child Ricky Fitts (Wes Bentley, Pete’s Dragon, Lovelace) or Bening’s real estate rival Buddy Kane (Peter Gallagher, Path to Paradise) or virtually any other character’s name. As with everything in American Beauty, it’s there to look, sound or feel good in mocking Americanism.

This might not mean what you think you see coming, however, which is the primary goal here as Mendes seamlessly shifts sympathies from some to others. The black-clad, Columbine High-like malcontents run amok prattling about plastic bags with vacant facial expressions while engaging in pseudo-intimacy. It’s like watching and playing with damaged dolls.

Ultimately, this is what American Beauty does best. Bentley’s Ricky Fitts character is a kind of freak of this artificial universe. On one hand, he’s gentle and almost human-like with Birch’s disturbed teenager. But finding beauty in death as he does before musing about a benevolent force doesn’t really align with his actions. The cunning, disowned, disembodied youth is a pathological liar. He films his naked girlfriend instead of being intimate with her. He lights her lawn on fire presumably in an act of courtship. He also listens to Pink Floyd, has a pager for drug deals and gets drug-free urine samples from a pediatric nurse. He only accepts payment for drugs in cash and he’s been out of an institution for a period of time. Oh, and he films naked neighbors but it’s OK since he’s a budding cinema verite filmmaker when he’s not pushing drugs.

It turns out that Ricky and Lester’s daughter Jane more or less discover that beauty only exists in death — in dead birds, funeral processions, guns, swastikas — and they do so just as fire and rain, topped off by a brand-new Pontiac Firebird, fall down in scenes that culminate with the absurdism of Garp mixed with the detachment of Ordinary People.

If American Beauty sounds exhausting, curiously, it isn’t. By now it should be clear that there’s so much symbolism in American Beauty that little things like a red door, a child’s sparkler and “Bali Ha’i” from South Pacific may go unnoticed. Add to this spunky psychological operetta choreography by Paula Abdul, a score by Thomas Newman and songs by Bobby Darin and what you get is a manufactured motion picture about what Kevin Spacey’s Lester Burnham calls a “stupid little life”.

It’s not that American Beauty doesn’t express itself well in its satire of Americanism and glorification of the nihilistic. The 1999 movie certainly foreshadows the 21st century, which began with a mass murderous bang which Ricky Fitts would surely find exhilarating. On its own downward terms, this death fantasy is too cute.