Directed by its leading man, Bradley Cooper (American Sniper) and co-starring the singer known as Lady Gaga, billed as Lady Gaga, the new remake of A Star is Born is good. Yet it is also a disappointingly missed opportunity. This is not the best version.

Hitting the main points of William Wellman’s sterling original 1937 film (read a roundup of my reviews of each previous version here), with nods to the 1976 remake, Cooper’s version, adapted by Eric Roth (Forrest Gump, Munich, The Curious Case of Benjamin Button) makes an impact. Given its essential theme contrasting selflessness with selfishness, which is more relevant than ever before, that’s to be expected.

However, absent certain elements, especially the role of the collective in spreading nihilism and explicitly dramatizing what destroys man at his best, it is also partial.

A Star is Born starts with guitar-playing vocalist Cooper’s banging out hard rock with his band before bingeing on hard liquor while his driver totes him around Los Angeles. The lengthy movie about a man on the way down meeting a woman on the way up recasts the falling star in a clinically correct mental health context. Unless you know how this story ends, look for plot clues.

Spiraling rocker Jackson Maine meets Gaga’s talented, rising singer Ally when she’s done up as Edith Piaf in a bar where men dress and lip synch as women. For her part, Gaga sings with gusto in her signature style, in which she starts singing and veers into belting the tune. As a performer, she conveys both a sense of commitment and a stage presence. As an actress, Lady Gaga is good, not great, as the insecure artist. 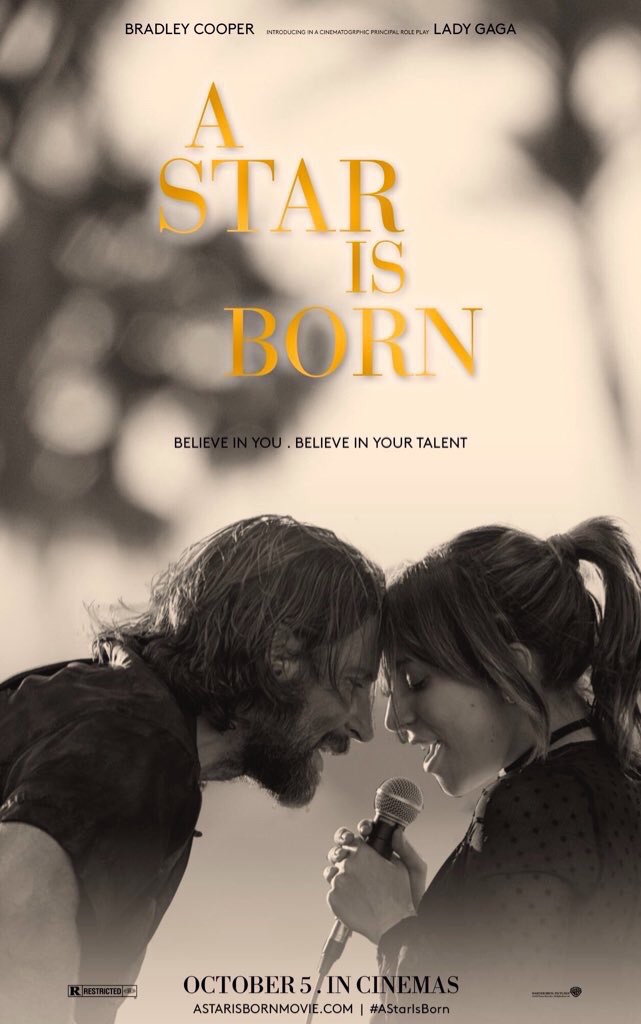 Lady Gaga’s Ally snaps Bradley Cooper’s scruffy, blue-eyed Jack out of his stupor long enough with her theatricality — she descends into the cabaret audience with a rose — for him to notice that she toasts with a martini and two olives. It’s love at first sight.

Or something like it. Whatever else, Jack and Ally share the artist’s curse of chronic self-doubt. Even after grizzled, drunken hunk Jack, who fills every stadium seat with his blend of rip-roarin’ country-rock, charms the club’s drag queens with a down-home song, he apologizes, confiding to Ally that he thinks he “fucked that song up”. This, too, is a clue.

That an insecure star tutors an insecure ingenue and what becomes of both drives A Star is Born. When the movie lingers on their songwriting, it’s hard to resist. Their moment begins in earnest in an empty late-night retail parking lot that’s both indelible to LA and setting for the best scenes in the picture. Here, with no one else in sight, the artists show their humanity through showing themselves. Like in real life, especially in the city of stars.

When Ally answers “me” after Jack asks her who’ll take care of her injury, their character lines are drawn. In the years since the original, it is telling that the tale of a presumably privileged male being crushed while molding the presumably disadvantaged female still captures an audience’s imagination. Gaga grasps the character’s requisite strength through empathy. But Ally’s undeniable empathy starts with herself.

This is emblematic of Gaga’s star persona and best performances. Ally draws upon her own self-care with a father (Andrew Dice Clay) who projects his self-denial; she sees in Jackson Maine what she sees in her father like a mile of bad road ahead. “He’s a drunk,” she observes about Jack early in the picture. The redeemable drunk is central to the story. Ally, too, wants to cash in on the promise of what Jack says he sees in her, so she follows him into the downward spiral.

Featuring Sam Elliott (Grandma) as Jack’s strong-minded older brother, a complicated relationship which is never fully explained, with Anthony Ramos as Ally’s best friend, A Star is Born descends and ascends with a series of pop and rock songs. When Jack and Ally duet on stage that “we’re far from the shallow now”, it underscores that life is made or broken on how one handles hardship.

Cooper inhabits the role, down to the evident pain on his face when he sings his new lover’s lyrics, to the point that his Jackson Maine is the most introverted version of the character. There’s not enough of Jack’s appeal on display, other than flashes of his blue eyes and occasional guitar riffs. His character fades amid mumbling, outbursts and the alcoholic’s constantly oozing skin. He smokes, snorts and gulps his way into oblivion, hiding behind facial hair, rage and music.

Only Ally brings him out. Together, they spontaneously write songs while touring, play with a puppy and get silly, often with looming clues such as Hollywood’s Chateau Marmont in the backdrop. Credit goes to Cooper, Roth and others for the film’s veracity in depicting the scenario that plays out. Toxic behavior, from enabling and codependent action to the tendency toward self-abnegation, let alone the drug use, rings searingly true.

Director Cooper’s first feature film is too long and unrefined; it needs editing. Scenes don’t play out. In fact, they get choppier as the picture goes on. A key plot point never gets developed. Ally’s best friend, amicably played by Ramos, comes and goes without realism.

A Star is Born wraps too quickly and neatly but not without having made that impact. It isn’t the best version, which remains the original, though it isn’t the worst. And while the 1937 picture starring Janet Gaynor and Frederic March is still the best because it depicts with perfection the quality that makes the drunk irresistible, this movie retains enough of the story’s intimacy, depth and poignancy to stir today’s audiences. The seasoned, discriminating movie fan will want more. But for most, while the gushing praise is mostly unmerited, this new version of the classic tragedy will (have to) do.

Incidentally, the show I attended at Hollywood’s Cinerama Dome was unfortunately prefaced by what amounts to an ad for the movie, a creeping and bad trend, which puts the audience in the movie, telling the audience what to think, before the picture begins.