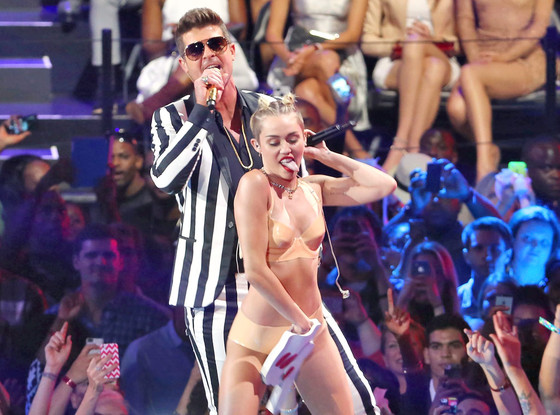 I’ll keep this short because I don’t think singer and actress Miley Cyrus is worth the fuss but her crude performance during an awards show – and really these are meaningless awards – has caused a stir and I have something to say about it. For context, I had no idea who this girl was when I reviewed her first movie four years ago (Hannah Montana) and I wanted to like her in The Last Song (2010) but I could see on both counts even then that the talented artist tries too hard. I figure she’s young and has her reasons, her father Billy Ray Cyrus for one.

First, there’s a double standard when it comes to the sexes. Our thugs-and-sluts culture mistakes slutty for feminine – see Fox News and those dolled up dames who barely resemble women let alone journalists who happen to be women – encourages females to see themselves strictly as sex objects and rewards men for behaving like brainless brutes. Why is it OK for Justin Timberlake to behave like a convicted felon and an Obama-worshipping creature named Jay Z who hustles his albums on cheap cell phones saying nigger all the time … but a woman grinding around like one of the whores who slithers up to those type of thugs is not OK? Brainless sluts and brainless thugs are all over today’s culture. They dominate sports, arts and, pathetically, children. Both are crude and disgusting but let’s not pick on the tramps. The men are even less appealing as far as I’m concerned. It’s like they’ve had a lobotomy.

Second, think about our role models. Men and women alike are regarded as acceptable, in general, only as brainless blank slates. Matt Damon, George Clooney, Ben Affleck – all are known for their inscrutable, non-emotional, dispassionate, detached screen personas. They’re like automatons. Brain dead. Even the supposedly thinking men, such as Maher, Stewart, Colbert and this year’s titty-obsessed Oscar host, are really just gussied up bitches that wisecrack. They’re utterly emasculated, snapping off lines like castrated, frustrated dorks that couldn’t get a date or bitchy old queens that sit around and gossip and cut people down. The women are no better: the semi-pretty ones are reduced to qualities that mock the best of a woman’s character and qualities, from Julia Roberts, who embodies the incompetent female, always falling, tripping, snorting or screwing up, to the current crop of fat and homely comediennes who are more famous for being crude and disgusting and acting like the men that feminists love to hate but emulate. Watching women grab crotches, spit, swear and behave like thugs is like seeing the most pitiful drag queen exaggerate every aspect of being female and wind up looking like a monster in make-up. It’s so bad now that the women are starting to look like the men who dress up like women. Just look at Fox News and it’s like walking into a female impersonator show in the 1970s. Draining brains from bodies does exactly that and our culture does it to both sexes. Don’t get me started on sports.

Third, we worship the frantic, the fast, the drugged up hedonistic approach to sex and sensuality. So, what’s left, as an overcompensation for the rise of Puritanism and primitivism, is too much of everything and and not enough of just being who you are – sex as a slow, natural, organic sensory experience with sufficient time, exploration, playfulness including foreplay and afterplay – in which just being yourself is never good enough. I once knew a married man who gave his wife a breast enhancement for her birthday, which struck me as self-defeating for both. I’m all for improving one’s life by one’s own selfish standards. But I think our dumbed down, anti-conceptual culture breeds self-denial, whim worship and the caricature that accompanies it – harridans such as Michelle Malkin and Ann Coulter come to mind – in a way that degrades men, women, character, values and sex. Such a culture can’t be lost on someone like 20-year-old Miley Cyrus, who writes songs, sings, acts and was a child not so long ago. Yes, Miley should reconsider what she does on stage. But let’s be realistic about the culture that put her up there like that in the first place.