The northeastern part of Los Angeles contains a neighborhood known as Eagle Rock with a population of about 30,000. I’ve enjoyed visiting and writing about the hillside section of LA for years. I almost bought a mid-century modern house near there some years ago and I write about Eagle Rock for a newspaper owned by the LA Times.

That’s why I’m disturbed by this week’s reports by the LAPD and an Eagle Rock campus club of an attack on a police vehicle and an apparently unrelated siege against a 9/11 memorial display at a small liberal arts school located there. Both incidents are under investigation.

Eagle Rock is tucked away by Glassell Park, Glendale and Highland Park in the northeast section of the city. Its main artery is Colorado Boulevard, which runs into Pasadena in the San Gabriel Valley where the Tournament of Roses parade strolls every year on New Year’s Day. The boulevard used to be lined with motels, Italian family restaurants and antique shops from Glendale to Eagle Rock before the Colorado Street Bridge. 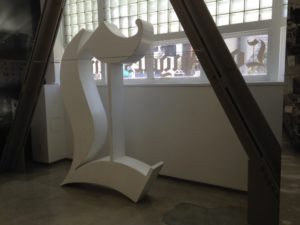 It’s still somewhat like that, though this small and interesting part of LA is changing. Crime has been a problem in Eagle Rock ever since I can remember. Homelessness, too. Pockets of the northeastern section, which, like Los Angeles, is part suburb, part urban, contain a variety of LA points of interest, from the actual hillside ‘eagle rock’ (because it resembles an eagle) for which the neighborhood is named to the 1953 recreation center at 1100 Eagle Vista Drive, conceived and designed by Richard Neutra. The rec center, with Neutra’s retractable walls, includes basketball and tennis courts and areas for children’s play and gymnastics. Its need for improvement is among several topics addressed at last week’s local council meeting, which I wrote about here in a piece posted on the Los Angeles Times website.

This week’s attack against police off the 134 freeway and anti-American vandalism and assault on freedom of speech at Occidental College, where Barack Obama and Jack Kemp, the 1996 vice-presidential nominee, once took classes and graduated, respectively, are major events and ought to cause Eagle Rock residents, schools and businesses serious concern. When I attended the all-volunteer council’s meeting, I found those attending and presiding to be very engaged, especially about the prospect for worsening crime, so I anticipate a strong reaction.

But I also think Eagle Rock is a microcosm of the country, with crumbling infrastructure and more government control, with some focused more on punishing the productive and profitable than on improving the quality of life by protecting the First Amendment and property rights. I’ve also found decent hardworking individuals in the community who have lived, bought, traded, worked and invested there for years.

As with good Americans everywhere, they must rise to the challenge of this new siege on free speech and assault on law enforcement by showing up at council meetings, speaking out, exercising the freedom of speech and defending the rights of the individual.

Eagle Rock, like America, certainly has what it takes to end the attacks.

From the shops, boutiques and eateries along Eagle Rock Boulevard to Eagle Rock’s library and the wine tasting room on Colorado Blvd., which I wrote about last week, there’s more good than bad in this uniquely mixed LA neighborhood. As the wine tasting room’s owner, an Occidental alum and businessman who spoke of his plans to host a talk by Oxy scholars on Greek mythology, said when he showed a tattoo of Achilles: “I love the classics.”

This display of pride in explicit free expression and support for the foundations of Western civilization is just what besieged Eagle Rock needs.