Hong Kong Fights to be Free

Hong Kong’s protest leader Joshua Wong recently Tweeted this image of a painting, which imitates Liberty Leading the People (1830) by French romanticist painter Eugène Delacroix (1798-1863), whose painting is at the Louvre in Paris. This brave young anti-Communist and his fellow rebels in Hong Kong fight as I write this for their freedom, lives and future. To paraphrase Ayn Rand, those supporting and participating in the Hong Kong protests fight for the future by living in it today. 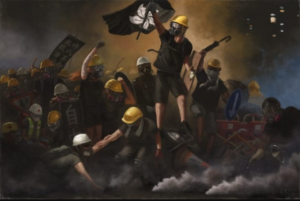 Nothing on earth, based on what I know, matters more to the West’s survival at this moment than Hong Kong. That few think about, let alone grasp the meaning and magnitude of, this assertion is a fact of reality. Those that don’t want to know or do not care about Hong Kong, the West, America, rights and individualism are, ultimately, of no consequence.

Among those who do, it’s additionally discouraging to know that few choose to stand with Hong Kong. Rare friends, who on these issues are more like brothers, such as Andrew, Maryallene, Rohit, Amy and Mark, make a point to take the lead, express support and in clear and explicit terms.

Most do not, even among those who claim to know better, as I recently reaffirmed while skimming social media. After reading a portion of an extended comments thread from a post about a dispute between the author of an innocuous commentary about being gay and an anti-sex critic, this inversion became clear. The thread chiefly consists of aimless speculation about what one might do about this or that in response to (!) an arbitrary assertion. The comments are posted by those who claim (or ought) to know better as Hong Kong hangs in the balance. The frenzy’s not an occasional occurrence. Posting about trivial issues “while Rome burns” is chronic. Today’s best minds are consumed by memes, pictures and nonsense.

… at a meeting that has not been publicly disclosed, Mr. Xi met with other senior officials to discuss the protests. The range of options discussed is unclear, but the leaders agreed that the central government should not intervene forcefully, at least for now, several people familiar with the issue said in interviews in Hong Kong and Beijing…Now Mr. Xi faces an even bigger trade war, with much higher tariffs and greater tensions. The [dictatorship] appears to be hewing to a strategy of waiting out Mr. Trump, possibly through his 2020 re-election campaign, even as the dispute has become a drag on the economy…[Red China’s puppet in Hong Kong] offered a candid assessment of Beijing’s views, even if one she did not intend to make public. She said Beijing had no plan to send in the People’s Liberation Army to restore order because “they’re just quite scared now.”

… State television and the party’s newspapers now refer to [Xi] as “the People’s Leader,” an honorific once bestowed only on Mao. “The People’s Leader loves the people,” The People’s Daily wrote after Mr. Xi toured Gansu, a province in western China. Mr. Xi’s calculation might be simply to remain patient, as he has been in the case of Mr. Trump’s erratic shifts in the trade war. In his remarks on Tuesday, Mr. Xi also gave a possible hint of the government’s pragmatism.

“On matters of principle, not an inch will be yielded,” he said, “but on matters of tactics there can be flexibility.”

Journalist John Stossel once told me during an interview in New York City that real news, i.e., the first draft of history, happens slowly. I think this is true. What happens in Hong Kong matters.

I’ve been writing about Asia, China, Korea, Vietnam and the Orient for decades and it’s impossible for me to ignore that, in this singular act of rebellion led by brave Mr. Wong and his comrades, the East comes to a climax which has the potential to uproot Communist China and pivot to buy time to save the West. The rational individual ought to dispense with the meaningless and instead watch, think, evaluate, judge and exercise free speech to support the rebellion for liberty in Hong Kong.

Joshua Wong, who was arrested for crimes against the state and is out on bail, strikes me as savvy enough to know that even the best minds in the West are too easily distracted by pictures and other sensory diversions. So, he’s posted a painting as propaganda to support his noble cause. But in words and deeds, nothing less than his life, and his love of it, is at stake.