When I saw it last year, I enjoyed it so much that I thought maybe I may have missed something; that it might have been too polished for me to notice any shortcomings. So I asked for a second screening, which is something I rarely do and only in an extreme effort to be objective. I liked it better on a second viewing, even as I became more aware of its flaws, such as some overacting. 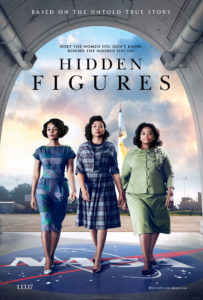 Why is this Oscar-nominated movie so universally well liked by audiences? I think it’s because, like any serious, goal-driven project, Hidden Figures keeps perspective and keeps its topic rooted in reality. So, while the story of three individuals of ability, who happen to be Negro women at a time when blacks and women were prejudged and unjustly treated, takes injustice seriously, the movie co-written and directed by Theodore Melfi (St. Vincent) also takes its higher aim seriously: to depict the achievement of excellence. The women’s accomplishments were not overdramatized; they were properly depicted as an important and integral part of a whole which led to an act of outstanding, and uniquely, inextricably American, progress.

The struggle was portrayed with realism, not sugarcoated or diminished. But so, too, the byproduct of the ladies’ productiveness was depicted and Melfi and company did so without minimizing the achievements of the NASA (actually, pre-NASA) engineers, scientists and astronauts. Too often, movies about overcoming adversity and injustice oversimplify facts, drop context and present a false dichotomy, lacking in depth and nuance. Hidden Figures, whatever its limitations, dramatizes the hard work of real progress, social and scientific, the simplicity of being appreciated for one’s ability and the power of unifying to achieve a grand and noble goal.

This is a rare and desperately needed depiction, and, sometimes, these points are obscured or lost in press tours, but that’s what makes this upbeat, uplifting movie appealing—it shows everyone that being one’s best is the perfect defense of every persecuted individual, especially the persecuted person of ability. I’ve added my exclusive interview with the film’s director, Ted Melfi, to the archive. Read the interview, read my review of Hidden Figures and buy the movie.