Mr. Funny Face, the great actor, comedian and writer Gene Wilder died today. The star of Blazing Saddles, Young Frankenstein (which he also wrote) and Silver Streak was 83 years old. And, though he is associated with a streak of absurdist comedy brought forth chiefly by his frequent creative partner Mel Brooks, a wonderful source of silliness grounded in seriousness has been lost. 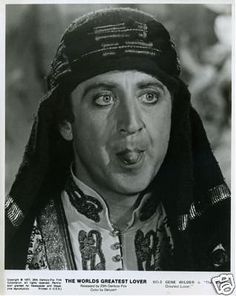 The screenwriter Wilder supposedly took his name from writers, too, blending a character from Look Homeward, Angel and the name of an American playwright, which suggests his thoughtful nature. The literary tie-in was apparent throughout his remarkable career, which was remarkable for its many failures, which he constantly overcame.

Gene Wilder broke out at the peak of the counterculture in 1971’s weirdly brazen yet reassuring adaptation of Roald Dahl’s Charlie and the Chocolate Factory with Paramount’s Willy Wonka and the Chocolate Factory, though he had made an impression in smaller roles, too, such as an innocent victim in Bonnie and Clyde (1967). Wilder played Wonka, of course, in the box office musical flop, one of many of his commercial failures that nevertheless influenced movies, ideas and culture. I think it was the first motion picture of his that I saw in a movie theater. I was transfixed, not by his weirdness, which forged a path for movie stars such as Johnny Depp.

I was captivated by his oddly severe benevolence. This unique quality, Wilder’s strange seriousness gilded with kindness, is his defining and most enduring screen persona. He displayed it, too, in his triumphant 1980 movie with director Sidney Poitier (Guess Who’s Coming to Dinner?) and another famous comedian, Stir Crazy. I don’t think I had ever laughed so hard in a movie as when I watched his pairing with the late comic genius Richard Pryor (and, oddly enough, that movie was my first experience of seeing a movie being filmed; it was at the Tucson, Arizona hotel where I was vacationing with my family).

Gene Wilder and Richard Pryor are Hollywood’s first interracial comedy duo. The hilarious pair made four movies together. A look, a squeal, a facial expression, a line, a gesture, everything they did was comic chemistry on screen as they mined an audience and story for wonder, laughter and satire in everything they did. Though it’s not perfect, 1976’s Silver Streak teamed the Pryor-Wilder pair again, this time with liberated woman Jill Clayburgh in one of the rare madcap comedy capers of the 1970s to successfully integrate drama, suspense and humor with something semi-serious at stake. I know that many remember Wilder best for his roles in two 1974 Mel Brooks movies, which I never cared for, though Wilder is brilliant in Young Frankenstein. I prefer his other movies.

Gene Wilder made me laugh in Start the Revolution Without Me (1970), The Adventure of Sherlock Holmes’ Smarter Brother (1975) and See No Evil, Hear No Evil (1989) with Pryor, Wilder’s last movie I think I paid to see in a theater. Who can forget 1986’s silly Haunted Honeymoon with his then-wife, the late Gilda Radner, who preceded Wilder in death by ovarian cancer, and the late Dom DeLuise in drag? I think his best role was as innocent convict Skip in Stir Crazy, which still makes me laugh when I think about it. Gene Wilder went on to play in a television movie of Alice in Wonderland and his own TV series. He could play characters that were in turns biting, cruel and vapid. He was an amazing writer and actor of ability whose rubbery or stone face could fill a movie with enough humor to make it seem funnier than it was and, while it turns out that his legacy is to have been lampooning a world gone mad, Gene Wilder somehow managed to do it without sneering at the good.

Gene Wilder is for this reason alone already sorely, deeply missed. He is survived by his friends, family and wife, Karen, and, I know, childlike people everywhere who cherish his depiction of a strange, kind industrialist who, with “pure imagination”, dramatized that it is possible to be good in a world going bad.