Exhibit Review: American Spirits: The Rise and Fall of Prohibition

I was excited to happen upon the final scheduled tour stop of an exhibit titled “American Spirits: The Rise and Fall of Prohibition” at Pittsburgh’s Heinz History Center in the strip district last week. I had seen the PBS documentary on Prohibition’s history, which is very good. With resurgent Puritanism in today’s Me, Too hysteria and emotional calls for government-controlled drugs and drug addiction treatment, I was ready for an account of how America had fallen for, and ultimately rejected, a band of hysterical women and preachers railing against consumption of alcohol. 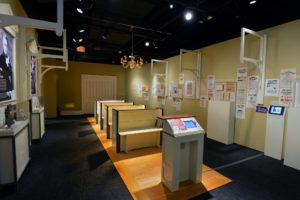 The exhibit is clear, concise and comprehensive. It flows from an area designed to resemble a church in which the hysterical pleas, denunciations and propaganda of America’s thugs and religionists, and some were both, are excerpted and displayed to sections detailing passage of the Constitutional amendment to ban alcohol. The exhibit moves from there to a replicated speakeasy, followed by an area devoted to exploring the criminalization of alcohol and its impact, turning gangs, thugs and mobs into sources for pleasure, release and self-medication, and the Roosevelt administration’s push for total government control. “American Spirits: The Rise and Fall of Prohibition” concludes with the triumphant effort to repeal the amendment and restore sanity, justice and individual rights to American law, reminding those of us opposed to the surveillance state, ObamaCare and the TSA that bad laws, contrary to the Trump administration’s pathetic excuses for not draining the swamp, have been and can be overturned. Repeal is part of our history.

Indeed, “American Spirits: The Rise and Fall of Prohibition” demonstrates how. But it begins with an extensive display examining the very real problem of alcohol consumption in America at the turn of the previous century. The Industrial Revolution cannot be understated in terms of liberating and enlightening the world. By then, alcohol consumption was high; Americans were already drinking to excess. Accordingly, the most productive single period of history exacerbated the downsides of a magnificent leap in human progress. One of them is alcoholism. This exhibit tells the truth about what went on; like today’s rampant hedonism and drug abuse, drunkenness infected the young nation:

By 1830…[o]n average, Americans over the age of 15 were guzzling seven gallons of pure alcohol each year. This was the equivalent of 90 bottles of 80-proof liquor – or about four shots every day. Three times greater than current levels, it remains the highest measured volume of consumption in U.S. history. The consequences of this national binge would be severe.”

Enter the Woman’s Christian Temperance Union (WCTU), which became a 250,000-women army led by Frances Willard whose wooden gavel with white ribbon, with white symbolizing purity, was used to run the group’s meetings. Exhibit materials report that religious denominations that forbade alcohol consumption, such as Baptists and Methodists, led the siege and, in 1893, in Oberlin, Ohio, the Anti-Saloon League (ASL), led entirely by Protestant ministers, was born. As with today’s Me, Too harridans, religionists exploited the problem and distorted facts, grafting themselves onto the scourge of alcoholism while leading a religious crusade for Puritanism in the American republic.

Again, “American Spirits: The Rise and Fall of Prohibition” shows how. With an accelerated campaign of lies, smears and insinuations, fringe figures, such as WCTU chieftain Frances Willard, war veteran Richmond P. Hobson, who became an Alabama congressman, Democrat populist and Christian fundamentalist William Jennings Bryan, a Trump-like figure who’d testified against teaching Darwin’s Theory of Evolution in the Scopes monkey trial and became Woodrow Wilson’s secretary of state, and the nation’s most famous religious evangelist, Reverend Billy Sunday, gained power through guilt and intimidation. Railing against the undeniable problem of alcohol consumption and public drunkenness, including fights, absent fathers and husbands and moral decline, they spoke, wrote and organized the campaign based on faith, half-truths, commandments and raw, unfiltered emotions. Reading their pledges, speeches and posters, it is clearly emotionalism. Americans took what they ranted on faith.

The religionists attacked private property. They indoctrinated youths with distortions of medical and scientific data in textbooks distributed through public schools. They invoked sobriety pledges. In fact, the WCTU succeeded in getting every state in the U.S. to require “temperance education in public schools”. The Woman’s Christian pressure group created a Department of Scientific Instruction which produced textbooks and instruction manuals and asked teachers to fill out report cards on how they encouraged temperance in their classrooms. A WCTU textbook, report card, and temperance lesson manual are on display in the exhibit, which reports that an estimated 50 percent of American schools carried the false and misleading religious propaganda. Scientists and doctors cited in the children’s textbooks altered the facts to suit Woman’s Christian Temperance Union dictates.

Visitors can read, listen and re-create excerpts from the anti-American speeches, including Reverend Billy Sunday’s 1916 “booze speech” (“The saloonkeeper is worse than a thief and a murderer…the saloon is an infidel”). A copy of the sermon with handwritten notes appears under his portrait, which hangs above the recreated wooden pulpit. Reverend Sunday believed that liquor was “God’s worst enemy” and “Hell’s best friend.” Willard invoked militant opposition to alcohol. William Jennings Bryan comes off as easily the most persuasive, reasonable evangelist, talking about the downsides of alcohol consumption and downplaying the hellfire and damnation in this particular excerpt. According to the exhibit, Bryan believed:

that Prohibition could improve the lives of ordinary Americans. He also was a supporter of the amendments to establish the income tax, provide for the direct election of senators, and grant the vote to women. Bryan ran for president three times on the Democratic ticket, but lost each time…Later, while serving as Secretary of State under Woodrow Wilson, he lived out his temperance beliefs by serving grape juice instead of wine at formal functions. 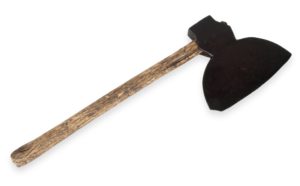 If Bryan was one of the more convincing Prohibition advocates, the most belligerent leader was a religious thug named Carrie Nation, who mostly went by ‘Carry Nation’ for publicity purposes. Beneath this crusading woman’s portrait, a glass case displays the oak and steel hatchet she wielded when she broke into a bar to smash a wall mirror during one of her infamous raids. On her picture, which shows the miserable-looking woman posed for battle, exhibitors report that:

Carrie Amelia Nation was six feet tall, with the biceps of a stevedore, the face of a prison warden, and the persistence of a toothache. Using these assets to promote her cause, Nation became famous when she strode into a saloon in Topeka, Kansas, and pulled out a hatchet, smashing all the bottles and the mirror behind the bar. Nation called her raids on saloons “hatchetations.”

The rest of “American Spirits: The Rise and Fall of Prohibition” bears out the truth about America’s alcohol ban, though this central question of how a civilized nation elected to impose an applied, total government control on itself remains the most pressing, relevant and timely. This also makes the first section on pre-Prohibition quietly disturbing. As if to underscore this point, the exhibit in this area includes an iPad questionnaire to determine whether you’re what was then referred to as either a wet or a dry. By judging answers to questions about the proper role of government, for instance, including the emerging and rising welfare state, visitors might be surprised to see which side they end up on. 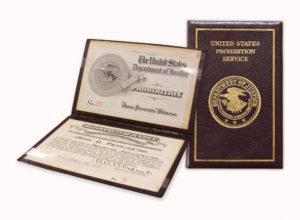 The “American Spirits: The Rise and Fall of Prohibition” exhibition, which includes a full accounting of the horrors of this wicked law and its impact, from state-sponsored alcohol spies to the many Americans who died because the ban existed, is presented by the Bognar Family and sponsored by Robert J. and Bonnie Cindrich and Latasha Wilson Batch; with support from local government, the Heinz Endowments and Richard King Mellon Foundation. Pittsburgh is the last scheduled stop on the tour for this exhibit, which runs until June of this year. With a fresh dusting of snow after a winter storm, downtown Pittsburgh was wet, cold and icy during my stay at the Fairmont Pittsburgh, though the weather had warmed to the low forties by Saturday, so I took the bellman up on his suggestion to walk along Penn to Heinz History Center. It’s interesting that the city of bridges is the Prohibition exhibit’s last stop because Pittsburgh is packed with Catholics who drink … a lot. And they’re still saddled with Prohibition’s outrageous regulations.

“Pennsylvania was one of many states where it ultimately became harder to buy alcohol after Repeal than during the 1920s, thanks to laws and controls put in place in 1933,” the exhibit’s lead curator, Leslie Przybylek, told the museum’s communications director in an interview. “American Spirits: The Rise and Fall of Prohibition” was originally curated by Daniel Okrent, a Pulitzer Prize finalist and author of Last Call: The Rise and Fall of Prohibition. These final months are the last call for an outstanding exhibition about an American injustice.