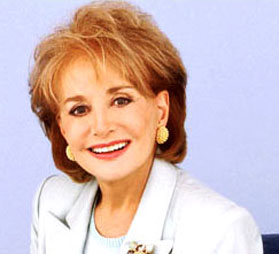 Having grown up with broadcaster Barbara Walters, who is widely praised as a pioneering journalist and interviewer and is retiring, I have thoughts on her over 40-year career, which runs from her co-hosting The Today Show to appearing on her show The View.

First, it is true that Walters is dedicated to her profession and I think she is ambitious and there’s nothing wrong with that (I do not, however, think she is exceptionally talented). Second, she has endured from television format to format, despite a speech impediment and being one of the few females in a male-dominated field of endeavor, that’s a fact. Third, she is commercially successful; audiences like to watch Barbara Walters, from morning programming and light banter in the afternoon to her interview segments in evenings before the Academy Awards.

But Walters is best remembered for her mediocrity. She has accomplished next to nothing as a serious journalist. Her interviews are her best work, though even these are hardly penetrating or serious given the unprecedented access and acclaim she received to and from some of the most iconic artists and statesmen of the 20th century. The fact is that time and again Walters squandered uniquely golden opportunities to ask piercing questions of serious philosophical significance and she rarely ventured beyond the safe, warm personality issues and questions of the stereotypical feminine feature.

Her ascension in TV news coincides with the women’s liberation movement, when thanks to works by Betty Friedan (The Feminine Mystique) and Ayn Rand (Atlas Shrugged) among others, including the fountainhead of entertainment for men, media magnate and Playboy founder Hugh Hefner, the role of the productive woman in Western civilization was expanding. She cashed in on liberation as many did. Women were gaining ground in the marketplace and rightly so after Americans embraced the idea that women should be free to work, too, for their own happiness, not just to make ends meet or support the war effort. The working woman as a rational, selfish person became more acceptable during the 1970s self-help era, fed by Rand’s hugely popular literature of egoism, and Walters, who was professional and articulate, often seemed to be one of the best practitioners and examples.

Walters fell far short, though, seeking typically to elicit tales and tidbits from Communist dictators and legendary movie stars more than to challenge and demand to know answers. This approach, in turn, fueled her ability to gain ever more prominent, if lightweight, interviews, not a single one of which is memorable for having disclosed, demonstrated or illuminated something crucial and meaningful about human life and action. She infamously asked Katharine Hepburn what kind of tree she’d like to be when Hepburn said she’d like to be a tree (oak is the answer). She is said to have “humanized” her interview subjects but to my recollection she never got to any but the most salacious, fragmentary and fleeting parts of their lives and rarely for longer than a few seconds. She interviewed world leaders, heads of state sponsors of Islamic terrorism – before 9/11 – and dictators and to my recollection made not a single seriously lasting impression. Among her biggest achievements is a most-watched interview with the White House intern who performed fellatio with the president which led to his subsequent lies and impeachment and, in retrospect, distracted Republicans and Democrats from performing government’s most fundamental role, defense, leaving Islamic terrorists to execute a diabolical act of war.

Walters wrote a recent memoir in which she disclosed having an affair with a married man and U.S. senator who is no longer alive. She co-created a women’s talk show that she appears on which is known more for vapid back-biting and gossip and catty public spats between women. Her time at Today, 20/20 and ABC Evening News is forgettable.

Like Oprah, Barbara Walters has proven more proficient in promoting herself than in informing and enlightening her viewers. She has been accused of ingratiating herself in an opportunistic way to people she perceives as powerful, usually men, in order to advance her career which by any measure is a commercial if not creative success. I do not know whether this claim is true but having observed her for 40 years, interviewing some of the worst monsters on earth and the most skilled people of ability, I think she has very little to show for what she’s done which to me is driven by appearing intently interested without in fact being interested in what she is covering at all.

Barbara Walters ultimately traffics in trivia, faking sincerity every step of the way, leaving very little if any original reporting or interviewing that’s a first draft of anything let alone history. She is famous for being famous, paving the way for people like Kim Kardashian, or, for that matter, Megyn Kelly or Rachel Maddow, women who behave like shrews and harridans (Coulter, Malkin, Huffington) who appear to be passionate about news though in reality huff and puff and add very little to one’s knowledge of what happens or matters. Walters’ lengthy career represents everything shrill, shallow and vapid about today’s barely legal or existent free press.

Really, Barbara Walters is a pseudo-journalist. She at once plays into the stereotype of women as dim, opportunistic and emotionalistic or anti-conceptual and embodies the empty suit or airhead lampooned by cultural commentators. Sadly, especially for the American public which deserves an intelligent, honest and sincere examination of news, facts and newsmakers, Barbara Walters retires with enormous success and wealth and a blank track record. There are many unsung women in journalism who advanced the art of writing, reporting and broadcasting (the late Jessica Savitch, a Walters peer, comes to mind). Barbara Walters is not one of them.