“There’s a bright golden haze on the meadow.” This line begins one of the greatest movies ever made, Oklahoma! (1955). Its original format was an ambitious and bold Broadway musical—itself an adaptation of a play by an Oklahoman playwright named Lynn Riggs—which Richard Rodgers and Oscar Hammerstein adapted with Viennese-born director Fred Zinnemann (The Day of the Jackal, The Nun’s Story, A Man for All Seasons), who also directed High Noon (1952) and From Here to Eternity (1953).

This musical lyric unspools a simple and circular melody rejoicing in the promise of a new day sung by a character who’s an American cowboy. He rides alone on the prairie, so he sings as a hymn to himself. He goes by the name Curly (Gordon MacRae), wears a bright red shirt and rides on top of his horse with ease, rhythm and total control as he sings in a low, booming and soulful affirmation: “Oh, what a beautiful morning! Oh, what a beautiful day/I’ve got a beautiful feeling/Ev’rything’s going my way.”

It’s a stunning moment in cinema, letting the audience see man in an undaunted musical expression of supreme self-confidence. 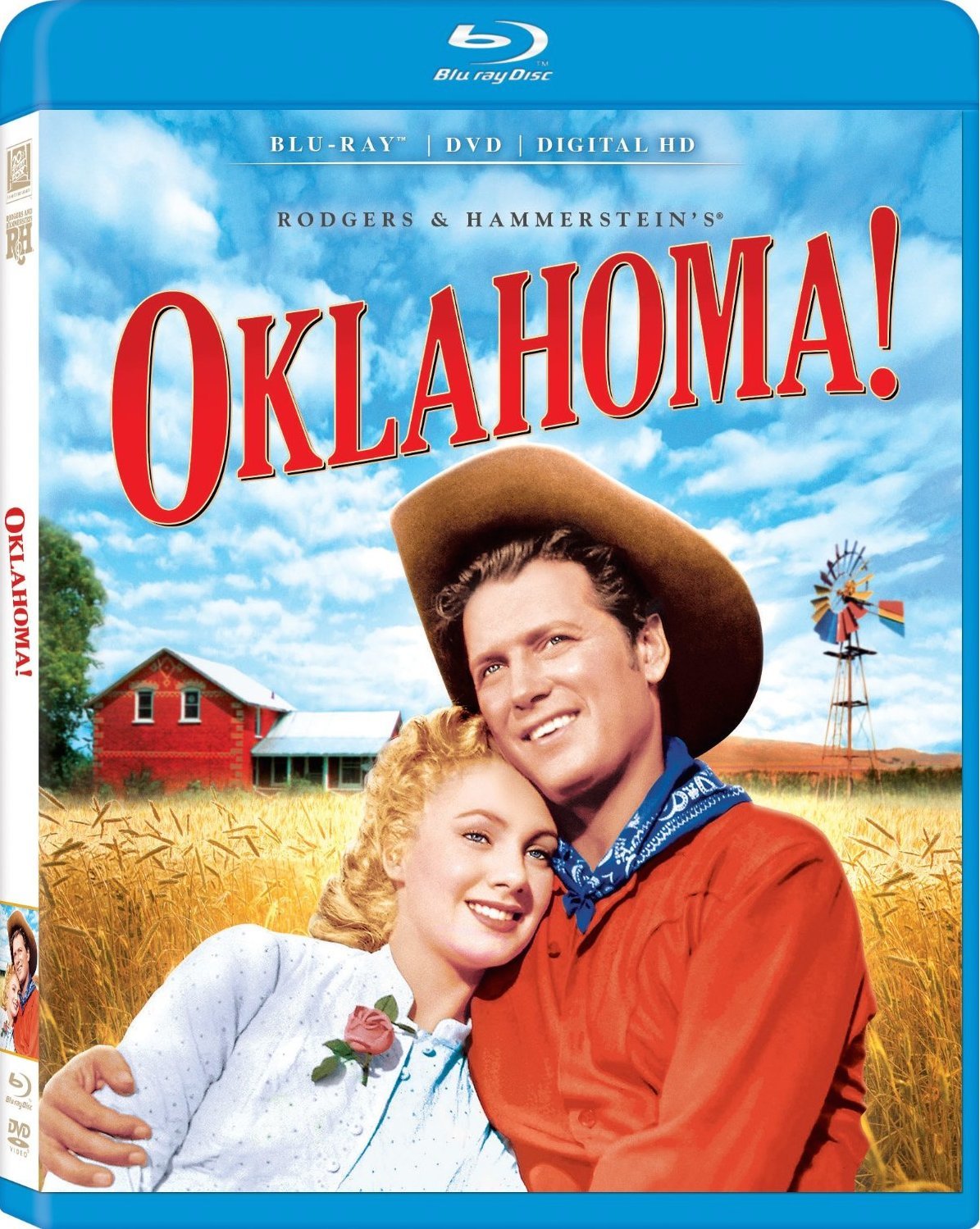 Curly’s accent is as flat as the Midwest’s, as clipped as the mountain states’ and as relaxed as the South’s with the vocabulary of the West and Oklahoma! is centrally about Curly making life go his way. But Oklahoma! is also about a period of time when it felt like the world could go America’s way; the way of individualism, capitalism and a robust, greedy and selfish pursuit of happiness here on earth.

I’ve previously seen Oklahoma!—which screened before Thanksgiving in 35mm at the Wells Fargo Theater at the Autry Museum of the American West and introduced by the Autry’s assistant curator of Western history Josh Garrett-Davis—on television, DVD and the silver screen and I always find new aspects in its artistry. This time, I noticed that the film, written by Sonya Levien and William Ludwig with songs by Rodgers and Hammerstein, is consciously liberal and decidedly anti-traditionalist. Oklahoma! is liberated about sex and filled with optimism for the future, not nostalgia for the past.

Curly looks eagerly, greedily, toward his future. The handsome cowboy takes no liberties and treats the pretty young lady he desires (Shirley Jones as Laurey in her movie debut) as an equal. Like Gregory Peck in The Big Country, he’s playful with Laurey, not domineering, and he respects her decisions when she makes up her mind, even when he knows she’s wrong. Curly’s accustomed not entitled to attention; when wise and frisky old Aunt Eller (Charlotte Greenwood in an outstanding performance) flirts, he takes it in stride.

But then Curly is an enlightened man. At mid-point in Oklahoma!, Curly notices a picture of a naked woman. He gets closer to inspect it. He gives the picture a good look. He thinks about it, then comments on it. He’s neither put off nor overly interested. He notices but he doesn’t drool or put on airs to impress others and he certainly doesn’t dismiss it. The picture’s another fact to assimilate in modern life and Curly’s curious. He’s neither hyper-masculine nor emasculated. Indeed, Curly doesn’t mind if Laurey sees him express emotion—whether anger or joy—as he knows his own worth.

Knowing himself figures into Curly’s conflict with the story’s villain, Aunt Eller’s hired hand, Jud Fry (Rod Steiger, Doctor Zhivago), competing for Laurey’s attention. MacRae’s performance is underappreciated, especially in their smokehouse scenes as Curly mocks Jud’s misanthropy, displaying subtle humor, bravery and intelligence as he measures Jud’s character in one of Oklahoma!‘s most disturbing scenes as unwashed Jud, who lives in a moist underbelly of primitivism, essentially chooses to come out for the death premise (this turns out to be a flaw in Curly’s character as he lets Laurey ride with Jud knowing that Jud’s a threat).

Laurey, too, is an enlightened woman. Though the character is incessantly critiqued for being sweet and virginal—and Oklahoma! is undeservedly criticized for being too sentimental (it is serious and dark, not all sugary and light, though it is emphatically romantic)—her solo starts as an ode to the “healthy and strong woman”, in contrast to a shallow, hyper-feminine second-hander. Laurey sings her complicated profession and lament to a gathering of women in whom she finds support and discovers in herself the skill for leadership. It’s a bright, frilly, high-pitched scene and song immersed in femininity and femaleness but it is not frivolous. For example, a short-haired brunette who stands out for being too rambunctious as the ladies dress for the auction is also pointedly the first female to console Laurey when she’s hurt and it’s the brunette that steps up to remind Laurey of her inner strength.

Shared values aside, Laurey is no less liberated when she is alone, bathing naked in the outdoors with neither shame nor exhibitionism.

Even steady, salty old Aunt Eller is a modern, rational woman who both scorns tradition and speaks plainly about men, passion and sexuality. Freethinking in Oklahoma! leads to sensual, romantic love, territorial unity and free trade; a more perfect union. When Laurey and Curly go side by side, their chemistry is electric. A butterfly encircles the couple. Set during the Industrial Revolution, Zinnemann captures Americanism in their fresh faces: the innocence, confidence and intransigence. With birds, horses and cattle in almost every frame, and drifting clouds and rippling waves representing widening effects of what’s yet to come—amidst incisive and exceptional songs—Oklahoma! implies that sex and love are best aligned and in any case are a vital, natural part of forging a dynamic, new land.

MacRae’s strong and solitary Curly, from romancing Laurey on that first beautiful morning to bidding on her picnic basket against Jud Fry, symbolizes the West’s new, freethinking man. Curly is the first one to initiate a handshake after a plea for peace, trade and understanding between cowboys and farmers.

I noticed more realism mixed with romanticism this time, too. Oklahoma! could easily have ended after a happily ever after scene. Zinnemann, aided in tone by an extended foreshadowing dream sequence in a dance choreographed by Agnes De Mille, goes deeper, letting Aunt Eller deliver a stern if tender cautionary warning to Laurey that life means taking the good with the bad, rising above adversity and accentuating the best in life.

No analysis of Oklahoma! would be whole without addressing its deft and delightful comic relief, Will (the perfectly cast and talented Gene Nelson) and Ado Annie (Gloria Grahame, acing the role) who bundle and bind the story’s themes into one immensely rewarding subplot involving Eddie Albert (Roman Holiday) as a foreigner. This pair cashes in on the Rodgers and Hammerstein humor after Will returns to Oklahoma from Kansas City to eventually corral Ado Annie, who keeps melting with men because she “cain’t” say no (except when Will goes to kiss her). Annie, daughter of a strict, dismissive farmer (James Whitmore), protests and explains, especially as her Will discovers pornography, ragtime and the “tellyphone” in a remarkable dance at the depot.

As with corn husker closeups, Zinnemann frames that scene and enhances it, symbolizing the Oklahoma territory’s change from old to new, as Aunt Eller’s horse-drawn carriage pulls up on the right of the screen as the camera pans to the left and a steam engine-powered train pulls into the station with a tail-wagging dog scampering to welcome the pioneer to the industrial revolution. The section finishes as Will casually hops onto his horse from the departing locomotive, retaining the cowboy’s way as the carousel of progress revolves.

This is Oklahoma! which brilliantly and musically, dramatically—with action-packed scenes, fabulous songs and great performances—renders the tale of a heroic individualist and the young, modern woman he loves, their chosen friends and fellow pioneers and the ties that bind in a rousing, and distinctly American, title song which could have gone on and on and on as far as I am concerned.

If you haven’t seen Oklahoma!, or if you haven’t seen it lately, this musical exists not to recall America’s past greatness as much as it does to showcase the boundless optimism that Americans once held as an ideal vision for the new country’s future.