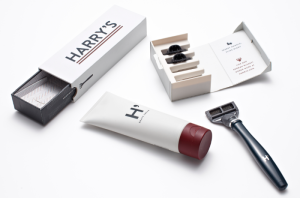 Responding to an advertisement on Twitter, I spent $15 on a new shaving product bundle made by a new company called Harry’s. I shave often, found the simple marketing campaign appealing – it centers on the high cost of those replacement cartridges we used to call razor blades – and figured that trying a new razor, shaving cream and a couple of replacement blades would be worth the cost. Shipping was free and the Web site for ordering reinforced my initially positive impression; it did not require the equivalent of an arm, leg and first-born child in personal identity information.

The package pictured here arrived soon thereafter. The packaging is as flawless as the marketing. The Harry’s shave is pretty close to perfect, too. The razor blade hugs the facial hair without tugging, which is a welcome change from the drag from Gillette’s and Schick’s mid-range products, which are overpriced, and the shaving cream is an eye-opening fresh cream that sufficiently lubricates the hair. The razor itself, the anchor product of this series, is perfect with one exception: it does not conform to that area between the upper lip and lower nose. There’s no backblade or single strip as on other razor blade models. That’s too bad because Harry’s razor is surprisingly light and perfectly contoured for precision shaving by hand. If only it had a means of getting that patch under the nose.

I will re-order from Harry’s, which thankfully does not include heavy-handed charity agendas, lines and pitches in its marketing, though I will keep other shaving tools on hand for that certain area, too. But I recommend Harry’s as an option for those who are fed up paying exorbitant prices for razor blades on quality razors.