Fed up with the high cost of shaving and sufficiently enticed by an advertising campaign, I tried Harry’s Razor for $15 a few years ago and wrote my first product review on the blog. It was also the first time I spent money in response to an ad on Twitter, proving on both counts that I’m neither an early adopter nor a big spender.

In any case, I found value in both the buying experience and the product and ordered from Harry’s again (read my original product review here and more of my product reviews here). I wrote that I would re-order Harry’s again and did. I’ve used Harry’s ever since. I did lodge one criticism of the product and made one related suggestion: I observed that the well-designed razor blade “does not conform to that area between the upper lip and lower nose.” I further reported that “there’s no backblade or single strip as on other razor blade models.” 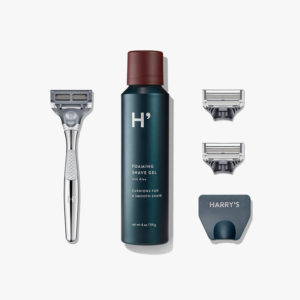 I concluded with the wish that Harry’s razor blade “had a means of getting that patch under the nose.” That 2014 blog post is, oddly enough, one of my most popular posts, so it wouldn’t surprise me if someone, even someone at Harry’s, read the post and noticed my suggestion. Who knows whether my post influenced the company’s recent decision to add precisely what I suggested in its latest razor blade, which I’m happy to be using with success. That Harry’s added the feature without diminishing its quality or increasing its cost, as of this writing, is part of why I remain a satisfied customer.

In fact, I’ve also used Harry’s simple online tools for gifts and trial packages of new products and everything’s worked great so far. The packaging is still solid and simple, which I value enormously since my Harry’s comes through mail order. I strongly prefer the shave cream to the foam, because it holds more closely to the facial hair, making the shaving strokes smoother and more efficient, though I’ve used the foam, too, and it’s alright. The post-shave balm is fine in a pinch, though I still prefer my regular moisturizer after a good shave. I upgraded razors to the chrome version pictured here. I bought the shaving stand, which is perfect for my bungalow bathroom. I gave the old razor away. Now, I see some Harry’s shaving products at my hometown Wal-Mart, so I’m glad they’re growing and expanding and I hope they’re making a profit.

I know that Harry’s doesn’t take my business for granted. They’re still competitive. Indeed, on this fiery, smoky LA Sunday morning, the company offered me an incentive for referrals. If you want to try Harry’s shaving products knowing that your Harry’s Shave Plan trial saves this writer a small amount on my next order, feel free to keep me bloodlessly clean-shaven (well, much of the time) and go here.