Goodbye Christopher Robin means well. With gentle storybook strokes, the biographical motion picture about A.A. Milne, who created and wrote the Winnie the Pooh children’s books, plays from Milne’s traumatic soldiering in World War 1 to his books becoming a worldwide bestselling literary series and beyond. Shown through flashbacks of battlefields, courtship and an only child, with fear of war looming over England, her war veterans and their survivors, Milne’s reconciliation of his war trauma comes through writing what’s childlike. 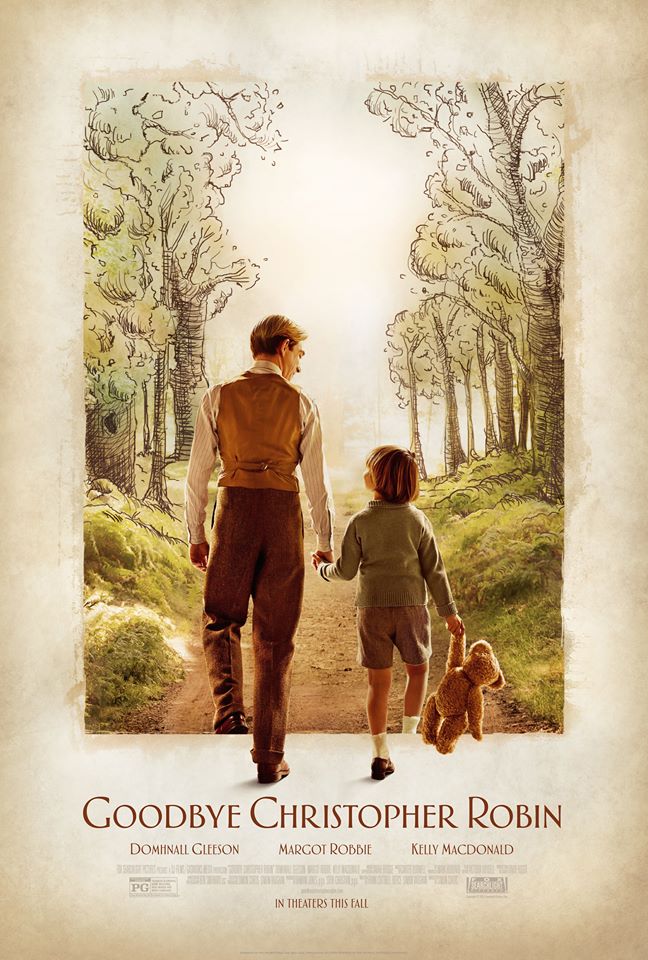 Reconciling with the child upon whom his stories are based is the movie’s centerpiece. In the showing and telling, and parts of this uneven movie are magically shown and told, the audience gets a sense of the writer’s life. That living with a writer, as Mrs. Milne (Margot Robbie, The Legend of Tarzan) must do, is unbearable. That working for a writer, as the child’s nanny (Kelly Macdonald, Merida’s voice in Brave and Anna Karenina) does, is also a constant strain. That having a storyteller for a father, as the only child of Mr. and Mrs. Milne’s union does, both draws and repels his attention without ever fully gaining his guidance and love.

The child is the Pooh series’ basis, of course, for the character Christopher Robin. I’ll leave it to Goodbye Christopher Robin to spell out the complications of having that name and all it implies for his boyhood. Here, the boy is taken away with his parents to escape London’s triggers for his father’s post-war trauma to live in a cottage near the woods in Sussex. You can probably guess what follows, with stuffed animals, trips to the zoo, an imaginative mother and father, moonlight, sunrays and the wonder of them all blending into the woods. An origin story within the story satiates one’s interest in the Pooh tales; most details are dramatized here.

As Mrs. Milne, Robbie’s a bit overly dramatic or possibly miscast. Daphne Milne’s looks don’t age as persuasively as her husband’s (Domhnall Gleeson, Ex Machina, Star Wars, Brooklyn). As Milne, Gleeson is superb, catching the writer’s irritability, the soldier’s torment, the husband’s lament and the father’s pride. The script does not allow him to show the writer writing, which would have tethered Goodbye Christopher Robin to the tales in a way that director Simon Curtis (Woman in Gold) apparently and understandably wants to avoid.

The result leaves loose ends. Daphne, for example, tenderly helps her future husband to heal when she guides him in how to lead and again later when she instructs him not to plead. Yet their bond never quite seals.

The books’ illustrator, one of the more compelling characters, trails off and disappears. The main two actors who portray the boy at differing ages, Alex Lawther and Will Tilston, are excellent, however, the screenplay does not fully account for the abrupt change in character which merely marks the boy’s progression. His emergence should be the film’s pivot point. Goodbye Christopher Robin contains insights about being the child of a creator — especially about being born to a talented creator whose creation becomes a commercial success — fathering, mothering and nurturing and, in the end, it suggests that parenting as an ideal simply and strictly means preparing the child to live, which is harder than it sounds, particularly for the walking wounded of the Great War.

As a war veteran-writer-father’s fable of how Milne made the most of his moments with his son, fencing and playing cricket in the forest, for the wonderful, childlike stories of Winnie the Pooh, Goodbye Christopher Robin leaves something unfulfilled. But there are also not many movies about sons of men who went to war and lived to write delightfully life-affirming tales. This movie’s lacking, but it hits sweet spots along the trail. It might be considered a must by fans of the books.