Written by the late Melissa Mathison (The BFG, The Black Stallion) and directed by legendary Steven Spielberg (Schindler’s List, Jaws, Munich, Close Encounters of the Third Kind, The Sugarland Express, Lincoln), Universal Pictures’ E.T.: The Extra-Terrestrial (available this week on a limited 35th anniversary edition Blu-Ray disc) remains sublime. Upon the recommendation of the greatest living philosopher, Leonard Peikoff, who names E.T. as his favorite movie, I saw it long after the original release. I was enchanted. 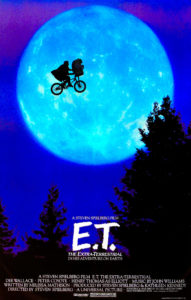 After this afternoon’s viewing (my first seeing it on the silver screen) at the ArcLight Hollywood, I’m happy to say that I still am. E.T. is not flawless, though it is close. What Mathison’s screenplay creates, Mr. Spielberg’s mastery recreates in moving pictures with wonder, humanity and deft courage to depict what it means to be kind and loving. E.T. does this with slow, deliberate lighting, scoring and multiple loops that bring characters, action and themes full circle.

The movie begins with a strong sense of fear and dread — Steven Spielberg uses horror in all of his films — in extended scenes of darkness after an alien spaceship lands on earth, dispatching the extra-terrestrial and accidentally leaving him behind. The largely unseen alien finds his way into a suburban California household’s backyard shed, where a middle child of a broken home (Henry Thomas) notices the disturbance. As he’d done with toddler Barry in Close Encounters and Chief Brody in Jaws, Mr. Spielberg in this way acknowledges the legitimacy of being frightened by a strange alien.

But, as in his other films, he shows that it’s also easy to be alienated from familiar beings, too. With a mother (Dee Wallace) still adjusting to divorce and an older brother (Robert Macnaughton) who is cruel and reckless, freckle-faced Elliott has his reasons to be drawn to an alien in spite of the risks. The wide-eyed child has an ‘enter’ sign on his room’s door, a clue that he’s actively seeking friendship. Simply, in perfect scenes of two young males earning trust, trading and cashing in, which starts when ET witnesses Elliott’s decision to run from an authority figure, boy and ET bond.

The bond first seals when they begin to sleep, as if the pair can really, only and deeply find peace in having found one another. Of course, the alien’s suddenly a fugitive from the United States government, and the boy’s gone rogue from his family, which mocks and repels him. From there, E.T. takes the friendship to a higher level, as Elliott tutors his new friend, whom he selfishly conceals from his siblings, mother and everyone else, first explaining to ET that he’s human, then that he’s a boy and, finally, that he’s Elliott. Hidden in Elliott’s room with posters, comics and figures such as the Incredible Hulk, Buck Rogers and Lando from the Star Wars serials, ET adapts. He refuels, recharges and overcomes his fear through Elliott’s sense of life.

All of this joy and enlightenment coming from the boy’s bedroom finally makes the middle child the center of the family’s home, sort of bringing the broken home together as the newly confident Elliott, as recharged as his friend, asserts himself in life for the first time. The boy draws a picture of the extra-terrestrial at school. He takes his younger sibling (Drew Barrymore) and, later, the older brother into his confidence, though Mom’s still too caught up in her new single parenthood to appreciate her growing children, let alone revel in her intelligent son’s emerging individuality.

Against this domestic setting comes the government, E.T.‘s villain as much as E.T. has one. While it’s kept in the backdrop for most of the movie, the threat of the state against their friendship creeps out in earnest — interestingly, fittingly — in the first scenes at a school. Amid a bulletin board about extinction and a teacher who remains essentially unseen, Elliott experiences a kind of telepathic communion with his friend back in his room. This entails Elliott’s dog, a can of beer and a clip of John Wayne sweeping Maureen O’Hara off her feet in The Quiet Man. The mayhem that ensues leads to Elliott’s coming of age. So, in a certain sense, does the teacher’s instruction in basic biology with frog dissection, which includes a lesson to “locate the heart and notice that it’s still beating.”

Elliott, melded with ET, acts so that it keeps beating. And this is one of E.T.‘s emblems; that what makes a heart beat, love and affection, is what keeps you alive. In ET, this vitality emits light.

The character suggested chiefly by dangling keys (Peter Coyote) represents the U.S. government, which, for 1982 when E.T. was released (the year Leonard Peikoff’s first book was published, in a happy coincidence), features an early depiction of the American surveillance state. For the state’s use of technology to violate rights, however, revitalized ET is one step ahead, devising and constructing his own machine, carefully using his friend’s possessions and lessons for electrical engineering.

Whose technology will triumph climaxes around Halloween in what’s probably Steven Spielberg’s most secular, individualistic movie — and, for this reason, his most American movie. Culminating as a contest of the byproduct of American culture, friendship and love and the state-sponsored result of government medicine, surveillance and coercion, ET explicitly embraces the former. “This is my home!” someone objects as the United States government violates property rights, as dishonestly and unjustly as in Close Encounters of the Third Kind, stressing another subsidiary theme and planting one of many bookends in this intimate fable about friendship. E.T. unfolds in its own time, not in rushed, fast-cutting jumps, graphics and effects.

The state’s total invasion of one’s private life versus the power of shared values yields the film’s most searing scenes in a makeshift medical trauma in which the Peter Coyote character — a kind of older, alternate version of what Elliott might become if he loses his idealism and innocence — refers to the “miracle” of the extra-terrestrial. It’s the closest ET comes to getting and giving religion. Followed with a question about how the government can help, which begs to be answered to get the hell out of the way, government’s role in the miracle is totally, utterly repudiated.

Yet the government’s not a realistic villain because they do not act in accordance with their power and conviction, one of the movie’s flaws. We know what the state does to an unwanted alien and it’s the opposite of what happens here (remember Elian). It’s a forgivable error on E.T.‘s terms, though, as Melissa Mathison and Steven Spielberg focus on the love and light between the two young males. Other flaws include too many insider references to movies and other contrivances.

Light and love charge E.T. like one of its big, Ray-O-Vac batteries in the picture that all but created product placement. In this way, E.T.‘s as fabulously commercial as Christmas. This doesn’t mean E.T. doesn’t integrate matters of the mind with the power of a beating heart. In gentle, soft and mercifully slow scenes such as a boy’s breath on glass as he holds vigil for the one he loves, taking a solemn oath to be here — E.T. is a perfect example that it’s possible to dramatize soulfulness in secular terms — and expressing love both in physical and spoken affection, E.T. sustains its “heartlight” theme.

As it does, each character within Elliott’s family is also touched, moved and, ultimately, exalted (even Harvey the dog). Here, its two-point circles illuminate like fireflies. Mother reads J.M. Barrie’s Peter Pan to her daughter — activating the sense of belief that arcs into a mother-daughter wish affirming life in reality. An angry boy lays down with imaginary friends, curls into a fetal position and awakens as an enchanted hero. In the most obvious example of the two-point loop, two friends’ flight by moonlight comes back around as the sun (and friendship) sets as E.T. rolls with a boy’s bicycle — backed by a band of boys’ bicycles — into one final, pulsating glow capped by the colors of a rainbow. With cinema’s most symbolic use of the sunflower as a metaphor for love as a matter of life and death since David Lean’s Doctor Zhivago (1965), E.T. charms, brightens and radiates.