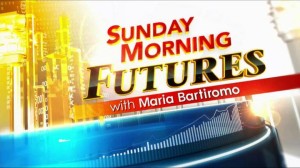 After hearing her address a business conference years ago and watching her on CNBC for years, I had been looking forward to seeing Maria Bartiromo on Fox News Channel’s new, live Sunday Morning Futures with Maria Bartiromo. But after watching it this morning, the new program, like the channel’s The Kelly File, shows little promise.

Because it’s hosted by Bartiromo, a capable journalist covering finance who is now a Fox Business anchorwoman, I will watch again. I admit I expected more from Sunday Morning Futures, especially because I think live television programming deserves a comeback. But her mixture of interviews with government officials, pundits and lackluster business persons draws my expectations down. Maria, curiously attired in a matronly outfit that contradicts her savvy broadcasting approach, fawned over an International Monetary Fund principal, asked middling questions about unemployment statistics and the economy of various guests and inexplicably booked two of the least engaging businesspeople, one of whom literally phoned it in with repeated and empty attacks on Barack Obama. I forget his name, and his anti-Obama remarks were so pointless and meandering, with no real substantial case, points or arguments for capitalism or against Obama’s anti-capitalism, and he is hardly worth remembering but he spoke with a thick New York accent and worked in advertising and this was the week’s lead interview. The deer-in-the-headlights businesswoman he was paired with, an entrepreneur who was live in the studio, also said next to nothing.

I want Maria Bartiromo to succeed. More than ever, business news is dominated by anti-business sycophants, bureaucrats and jaded journalists who hate capitalism and worship at the altar of Big Government and Maria is a solid business journalist whose liberation from CNBC, which she has said chronically poached her business interviews, should mark an exciting new milestone for media, business and a voice of reason for capitalism in broadcasting (as well as a more objective voice for News Corporation’s otherwise shrill, partisan media empire). But there was a distinct lack of challenging content, guests, questions and answers this Sunday morning and Maria ought to change the programming to feature more hard-hitting business journalism and less Fox News and Fox Business promotionalism. Eric Shawn’s unemployment breakdown was the most factual and informative segment. How about booking original, objective voices in business other than people who appear to have been booked based on favoritism, gender, ethnicity or political connections? Why focus on government statistics? Why not provide deeper facts, analysis and closer scrutiny of the unmitigated assault on American business?

Are there any businesspersons who reject the welfare state on moral, not merely practical, grounds? Let’s hear from them, get them live on America’s most-watched cable news channel and prove that there is more to TV’s “money honey”, a professional who has potential to be a smart voice in business news.