The Moneychangers, a four-part 1976-1977 winter miniseries that aired on NBC, is based on the bestselling novel by Arthur Hailey, who also wrote Airport and Hotel. The miniseries has a varied broadcast history as it’s been re-broadcast in a few incarnations, having been split into shorter or longer segments of varying lengths. I watched the approximately eight-hour series on DVD.

The television drama is better than I’d expected. Combining subplots that feed into the history, conflict and survival of an American bank, which is what makes this miniseries appealing, The Moneychangers shows how general consumer banking works. How many TV series, then or now, revolve around the boardroom discourse, daily operations and profitability of a bank? I’ve never read the novel, though I’ve read some of Hailey’s fiction, which I’ve enjoyed as light industrial or business-themed entertainment. 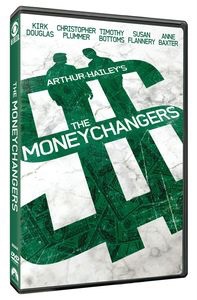 The Moneychangers, produced by Ross Hunter, who’d previously adapted Hailey’s Airport into one of Hollywood’s first major blockbusters in 1970, makes me want to read the novel. With a musical score by Henry Mancini (The Pink Panther, “Moon River” from Breakfast at Tiffany’s), a cameo by Marla Gibbs (Florence on The Jeffersons), a radical, anti-profit Elizabeth Warren-type character and leading performances from Christopher Plummer (The Sound of Music) and Kirk Douglas (Paths of Glory) as two bankers competing for the bank’s top executive position, the miniseries has potential.

The Moneychangers bundles its variety, potential and possibility for good drama, or at least melodrama. Especially with pre-Dynasty Joan Collins as an upscale prostitute on a crooked banker’s (post-Bonanza Lorne Greene) payroll. Look for Robert Loggia (The Jagged Edge), Stan Shaw (Scared Straight) and Patrick O’Neal (The Doris Day Show) as a crime boss, young black activist and advertising crony.

Timothy Bottoms (The Last Picture Show) plays a handsome young bank employee who embezzles the bank, gets caught, tried and convicted. He then serves time in prison. After he’s gang raped, he succumbs to an interracial same-sex relationship for protection. Later, upon his release from prison, the bank gives him an opportunity for a fresh start but it involves going underground to bust a counterfeit ring, with help from a single Latina mother and bank teller with whom he falls in love.

So, this is not typical mid-Seventies network television programming. Anne Baxter (All About Eve) co-stars as a top notch bank executive. Hayden Rorke (Dr. Bellows on I Dream of Jeannie) and Ralph Bellamy (Roots) also star in key roles. Look for Helen Hayes (the Boeing 707 stowaway in Airport) as an empathetic doctor.

The central plot involves the contentious rise of the two bankers seeking the bank’s top position after a grandson of the bank’s founder announces that he’s been diagnosed with terminal cancer. Add to this a run on the bank, the “social justice” warrior (Susan Flannery), class and racial strife, a terrorist bombing, a mentally incapacitated spouse, suicide and a crime syndicate and The Moneychangers moves briskly with a sense of purpose. Unfortunately, the theme’s not an endorsement of capitalism. But, for a pre-high technology, pre-mergers and acquisitions showcase of banking, as with Airport and Hotel, I found the dramatization of the industry fairly accurate, relevant and absorbing.

Kirk Douglas is relatively subdued for a change, not hamming up every scene, gritting teeth and overacting, though he does show off his muscles. This is some of Douglas’s best acting. Plummer strongly plays a Puritanical second-hander and pulls off a powerful climax. The late Percy Rodrigues, in the best acting performance and role of his enduring career, plays the bank’s security chief. He catches the Bottoms character in crime and serves one of the The Moneychangers’ best performances and subplots. Anyone who works in banking or wonders what’s involved (or was in the mid-70s) in money-making, saving and changing will probably find something here to appreciate and enjoy, even if half-naked Collins and some of the cast are cheesy in that melodramatic acting style.

The Moneychangers does not depict high finance. But it entertains.