Competing with Mr. Coffee, Keurig and other home coffee machines, Starbucks launched its Verismo (pronounced vurr-izmo like ‘gizmo’ preceded by the ‘ver’ as ‘vurr’) a few years ago. Read my positive review here. This fall, the food, beverage and lifestyle company, whose innovative CEO Howard Schultz stepped down this week, introduced a new version of the machine.

Verismo V, as the new name goes, is improved.

Better yet from the consumer’s perspective, they keep a similar price range ($129-$179), though it’s currently on sale for $99, which comes with a variety pack or your choice of a box of a dozen coffee pods (a limited line compared to Keurig, which also carries Starbucks coffees, including milk-based, espresso and brewed beverages). It’s available with a milk frother, but I already own one of those.

First, the negatives, and there are a couple. The new detachable water tank, unlike the original machine’s tank, drips upon detachment, so, when you refill it with water, expect leakage on the way back to the machine (I haven’t figured out if it’s possible to stop that yet). I’m filling it without removing the container. Also, and it’s not that big of a problem, Verismo V is larger and takes up more space.

Product design enhancements outweigh the negatives, however, and make up for inconvenience. For example, the water tank, previously located in the back of the machine, goes on the side. It’s measurably larger, too, so a couple drinking a cup or two in the morning won’t have to refill the tank as often and can probably go a few days without refilling. It’s more accessible than before, too, with a simple lid, which easily fits into place. The other version’s water container was tucked into the back of the machine, which was a minor hassle.

The cup/drip tray is also removable, only it’s made of sturdier materials—especially the black metal cup holder, which is separable—and now it’s made to magnetically lock into one of two places to accommodate different cup sizes (and it’s easy to detach the parts completely to make room for a travel mug or tall glass). Rather than an indented spot for the cup as in the previous version, the new Verismo coffeemaker curves the opposite way (outwardly, not inwardly), which takes getting used to. The lever feels thicker, there are more buttons allowing more brewing choices—but not too many—on top and Verismo V is observably quieter when brewing coffee. Beverages (you can use the machine as a hot water dispenser for tea and hot chocolate, of course) are as hot as or hotter than before.

Other improvements include the ability to stop any brewing with the touch of any button and an ability—this is new—to program up to four custom dispensing settings, which Verismo V retains, so two people can have their own separate preferences pre-programmed like car seat positions. In the short time I’ve been using Verismo V, a used pod didn’t drop into the detachable container just once, so that’s still a factor, but at least the space for spent pods is larger. There’s still a small discharge of water after the rinse cycle but splatter has been reduced, so the protruding brew spout is more precise. 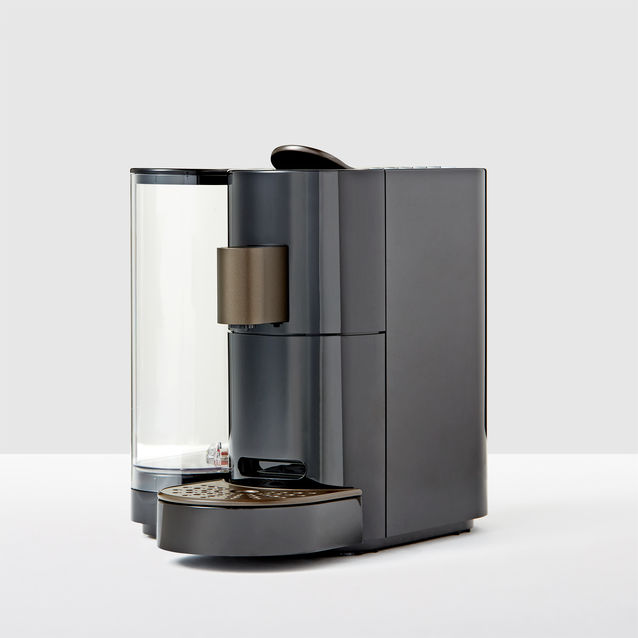 After set-up, here’s how Verismo works: fill the water container, power up the machine and place a cup on the tray. Wait for go signal (steady not blinking lights), pull the black metal lever down in one swift motion without a pod inserted, run a short rinse, empty the dispensed water and repeat with a cup after inserting a brewed, espresso and/or latte pod this time. Note that, unless you’re using the programmed settings, you’ll have to manually press any button to stop the brewing process or else the brewing does not stop and the cup will overfill. Verismo V still lasts a few minutes. Verismo V is a bit faster and commands are more responsive.

Starbucks offers fewer pod choices than Keurig’s line of K-cups, but limited edition blends, such as Christmas, Anniversary and others, are usually available in Verismo pods through Starbucks’ Target and in-grocery-store operations, online and Starbucks retail stores. Buying at Starbucks’ website in higher volume saves money, as pods come in boxes of 12 at about a dollar a pod (they’re not reusable).

Verismo V is for people who want to drink premium coffee at home without making a mess or spending more time, effort and energy than old-fashioned grinding, pressing and brewing. The coffeemaker comes with a good manual, which features set-up, programming, troubleshooting and cleaning and maintenance instructions, and the machine still automatically powers down after five minutes of idle time. For good, fast, convenient premium coffee at home, Verismo V remains an excellent option.

Go here to learn more about (or register your) Verismo V

Starbucks Story for a Monday