Book Review: History of the Holocaust 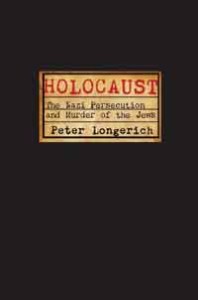 Oxford University Press recently published the 1998 Politik der Vernichtung (Politics of Destruction) by Peter Longerich (Professor of Modern German History at Royal Holloway, University of London) in English. The result, Holocaust: The Nazi Persecution and Murder of the Jews, is an exhaustive account of the National Socialists’ systematic extermination of Jews (among others) during World War 2. Using mostly primary sources from various archives throughout Europe, including Germany and eastern Europe, Longerich examines the Nazi murderers and their decision making process, demonstrating that the mass murder of the Jews was a “central tenet” of the Nazi philosophy, which was crucial to Nazi policies.

This hardcover reference volume, making use of the 1930s archives of the Central Association of German Citizens of the Jewish Faith, which re-emerged in the 1990s after years in Soviet Russia, relies on letters and reports detailing attacks on Jews by Germans. The documents show how the German volk (people) embraced Nazi attacks on Jews. Filled with notes, a bibliography and an index, this is a factual history, not a philosophical examination, of Nazi Germany’s atrocities (for why the Holocaust happened, read The Ominous Parallels by Leonard Peikoff).

“In the first month of the war,” Longerich writes, “Jews were almost wholly excluded from German society…In September 1939, for example, an (unpublished) general 8 p.m. curfew was imposed on Jews, their radios were confiscated, and their telephones were disconnected in summer 1940.” He continues: “Jews’ ration cards were marked with a ‘J’, they were only permitted to use certain shops, and the times when they were permitted to shop were strictly regulated by the municipality (and often limited to one hour a day)…These drastic measures had the effect of starving the Jewish population and ensuring that they devoted most of their energies to obtaining food.”

Longerich describes Treblinka as a “densely forested setting” which was “screened off from the eyes of the outside world.” At first, the mass murder at Treblinka was, he writes, “a crazed massacre” with an arrival area that was scattered with corpses. When new Jews arrived to see the mayhem, he explains, “[Nazi] guards reacted to the panic that arose with further shootings.” By the end of 1942, he notes, “precisely 713,555 people had been murdered in Treblinka.”

With a new introduction and new material on the victims, ghettos, and death camps, Longerich, currently working on a biography of SS leader Heinrich Himmler, has “significantly reworked, shortened in some places and extended in others” his history of the Holocaust into over 600 pages. This should be another important resource for those seeking knowledge of the 20th century’s second most evil dictatorship.