“You asked me once, what was in Room 101. I told you that you knew the answer already. Everyone knows it. The thing that is in Room 101 is the worst thing in the world.” — O’Brien, 1984 by George Orwell 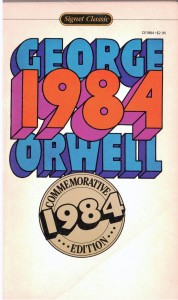 It is with irony that this quote from Orwell’s classic novel comes to mind. I recently wrote for a suburban Chicago publication about what was for me a painful, if mercifully brief, modern education experience during my youth. It was a high school within a high school called the Center for Self-Directed Learning, part of a New Left educational movement that sprouted in the late 1960s and early 1970s. The Center, as it was known, occupied New Trier’s room 101.

The former study hall had been converted in 1972 into the place where 600 students, including U.S. Sen. Mark Kirk (R, IL) and actress Virginia Madsen, would enter and exit during the course of their high school studies. The Center existed for 10 years without grades, teaching or classes. I recently interviewed the school’s co-founder, Arline Paul (read the interview here), the only New Trier faculty member to serve during the Center’s entire existence. Mrs. Paul, who had taught me political science in the traditional high school, was assigned as my “facilitator”, and she was kind enough to grant me an interview for the local newspaper. I asked tough questions and she answered them. It is interesting to go back and revisit high school as a journalist covering this radical experiment. I also reviewed the book of faculty and student memoirs she co-edited (read the review here). I wanted to provide a clear, factual account of this example of modern education.

My overall experience in government-sponsored education was atrocious. It was so bad that the quote from Orwell’s 1984 – which, ironically, I read while enrolled as a student in the Center – strikes me as an apt prelude for these articles about the Center. I’ve already heard from one reader who defends the whim-based approach to education. I have also heard from another reader. He tells me that he is young and that he, too, experienced the ravages of today’s modern, anti-conceptual education. He wrote to tell me that, after reading what I reported about the widely acclaimed New Trier, he thinks that his experience was worse. This is what I hope to counter. This is why I wrote these pieces, which I intend as an honest report and review of the facts of modern education.