The Goldfinch inspires. It’s the second movie this year that I instantly knew I wanted to feast on for its sumptuousness again as soon as it was over. The movie, based on a novel by Donna Tartt, unwraps, rewraps and unwraps its mysterious gauze. What remains is refined, simple and respectful of an ideal. This alone makes it exemplary. 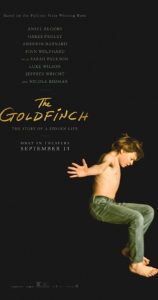 I watched the Warner Bros. film this week at one of Pacific Theatres’ theaters at the Grove, having never read the book, which The Goldfinch makes me want to do. Since I lost my friend and fellow movie critic Kathy to suicide years ago, I often attend press screenings alone. I tend to avoid the movie media herd. They’re brash. Some cackle across the theater as they file in, shuffling and putting on a show of conversation no one but them wants to hear. They chatter or act out in shrill voices about what movies they “looove”, by which they mean the opposite, and hate. Despite my efforts, it was impossible not to learn in advance that the pack hates The Goldfinch.

Now that I’ve seen it, it’s easy to see why. Like 2019’s best picture so far, Rocketman, that other film I immediately knew I wanted to watch again, The Goldfinch is multi-layered, deep and serious. Naturally, dilettantes, who gather in tribe, hate it for its earnestness. But “[t]here’s fun in being serious,” as jazz composer Wynton Marsalis once observed.

So, the dissonance of modern life begins in a visual haze as a narrator invites the audience into a hotel hallway. This starts the peculiar tale of troubled young Theo (Oakes Fegley, Ansel Elgort). With lingering shots and precision in color, or lack of color, pitch and tone, The Goldfinch under adaptation by Peter Straughan (The Snowman) and direction by John Crowley (Brooklyn) gently, if not flawlessly, stitches and unfurls a beautifully rendered movie. In scope, relevance and humor, it recalls The World According to Garp. In psychological tone, Robert Redford’s Ordinary People, down to that picture’s water-themed plot points and contrast of cold mother figure with warm, sweater-wearing radical, comes to mind. Add intrigue ala The Da Vinci Code and The Bourne Identity, with each of those films having origins in books, and The Goldfinch is at once sharp, wondrous and original.

Nicole Kidman (The Human Stain, The Killing of a Sacred Deer) co-stars as a patroness of the arts with proximity to the title’s famous painting, which is believed to have been lost in a terrorist attack on the Metropolitan Museum of Art where Theo was visiting with his mother (perfectly cast and featured Hailey Wist). Amid works of art and an insistence on “keeping busy”, possibly so she won’t have to think about her Jekyll and Hyde husband (Boyd Gaines, always spot on) or her too-close tie to her first-born son, her family, the Barbours, comes out of a John Irving novel.

Enter Theo after the bombing of the Met, which flashes back in patches, enshrouding the shellshocked boy in nightmares. Every nook and cranny in this sprawling, involved and richly detailed movie comes with a certain purpose, from the sound of wailing sirens, his yellow bag, and knowing lines to references to Oz, Noah’s ark and a civics textbook. The Goldfinch is best viewed as a puzzle to solve and to save.

“You never know what’s going to decide your future”, Jeffrey Wright’s character counsels Theo, a lost white male innocent of the fact that it’s become a religious commandment to malign white males. Theo faintly evokes Earl Hamner’s New York-bound observer John-Boy (Richard Thomas) character from fiction, movies and TV. These are more reasons why dilettantes hold Goldfinch in contempt, especially given the plot’s splendid resolution. The honest and discerning audience is likely to see in this child character the curiosity and innocence that comes from taking ideas and life seriously. But this is a movie, which becomes obvious at times, such as in Sarah Paulson’s slightly overdone performance as Theo’s trashy stepmother in the picture’s most underdeveloped role.

Watch Luke Wilson (Legally Blonde, The Family Stone) as you’ve never seen him. Marvel at dangling threads being tied into a theme that man, emphatically against what today’s college professors insist, is not only not dust in the wind; he has a capacity for enlightenment and goodness, which comes from clearing away dust, including the residue of whatever havoc he’s wrought with his mistakes. Whatever flaws in its execution, this premise is profound.

The Goldfinch (as against Once Upon a Time in Hollywood) also properly depicts the scourge of drugs, cigarettes and alcohol as an increasingly common means of evading hardship. Crowley and Straughan employ Tartt’s wet/dry clues and allusions about lost kids, cleansing one’s soul and escaping the dead end. In an era of daily mass slaughter and post-September 11’s mass delusion and evasion, The Goldfinch portrays post-trauma better than any movie since Peter Weir’s Nineties gem Fearless. Given today’s drug-induced mindlessness and socialist-anarchist mania, it knits an alternative to American Pastoral’s hard take on making a proper society, family and life. Nodding to L. Frank Baum’s Oz, there’s a glowing metropolis, a wise man (who worships the manmade and wants to know: “Is [a claim] true?”) and an adorable dog.

A key character’s twist leads to resolving inner conflict, calling what constitutes fraud, originality and ownership into question. With an initiating event that echoes America’s near-daily mass death, the almost exalted way in which Crowley stirs dust particles from a passenger jet, swingset and terrorist attack aftermath into the film’s final frame makes The Goldfinch an elegant challenge to the blank, thick-headed nihilism of American Beauty, Tarantino movies and today’s dogma that one must be “woke”, jaded and smaller than life and certainly oneself, leaving zero emissions behind.

The Goldfinch exists to provoke thought. Send to hell what the dilettantes think (or say they think). Go see The Goldfinch and judge for yourself. But let for once a movie build you up.