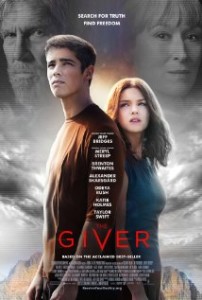 The Giver doesn’t generate enough tension and conflict to sufficiently recreate a collectivist dystopia against which to rebel. This is too bad, because the film is poetic, elegiac and at times subtle and moving in a secular and spiritual way. This is also too bad because art in the West desperately needs to ignite the passions of the youngest minds to defy conformity and resist the rise of statism.

The Giver is too timid to light the match, though it does enlighten and inspire if you know what to look for. But you have to know in advance. Otherwise it’s just a picture show with pretty words and people.

What a show. Beautifully filmed in black and white and based on the novel by Lois Lowry, with surges of color that bring the theme to life, The Giver, directed by Philip Noyce, gives the audience its strict collectivist dystopia straight with lines about pure egalitarianism – all people are treated as equal in all aspects regardless of differences and ability – and the goal of a total, government-controlled life. From birth to death, the government dictates every aspect of one’s existence. With Meryl Streep as a matriarch in limp strands of gray hair with bangs, it’s like watching a withered old white woman doing a version of preachy Michelle Obama dictating what food to eat and nagging that you didn’t build that; the collective did.

The collective reigns supreme over the individual in this sterile, bright future, which of course means certain clusters of power-lusters control everyone else, so that even on high school graduation day, when the trio of friends Asher (Cameron Monaghan), Fiona (Odeya Rush) and heroic Jonas (Brenton Thwaites) are commanded by the state to submit to their assigned vocations ala Anthem by Ayn Rand, as Big Mother (Streep) coos like it’s a guitar mass with kumbaya that “today we honor differences” and really means that We the Ordained dictate what those differences shall be. Watching The Giver is like seeing ObamaCare dramatized – the state dictating winners and losers while denouncing winning and losing – and in this sense it’s fabulously clever filmmaking.

It really is. With deliberation in every scene, the fresh-faced youths bound forth in life with enthusiasm and idealism, eager to live large what they’ve been taught are the four virtues: intelligence, integrity, courage and “the capacity to see beyond [the range of the moment]”. In fact, these are virtues though the kids soon discover that the Female Deity they worship defines each by a standard which may or may not match their own. The ultimate goal of the post-climate controlled society is to fit each individual into the collective. Everyone, it appears, must submit to the group. This means no expressing emotions, no public displays of preference, no identities for infants of questionable value to the greater good – especially males, apparently – it’s a sexless feminist-Puritanical totalitarian regime. There’s no kissing, but at least there’s no porn and nobody’s obese.

Enter masculine, upright Jonas, whose assigned vocation is somewhat murky as the Receiver. The more he learns, at the hands of master Jeff Bridges as the Giver of memories, the more he wants to sense, to experience and to think, know and feel. Of course, with everyone including his mother (Katie Holmes) chanting “we forgive you” like it’s Jonestown, Guyana, and his own friends reminding him that “we need sameness”, the urge to think different poses a problem.

With powerful scenes and images of winter, joyous people in harmony – as against vacant people bound by force – and an image of the lone man who stood against a government tank in Communist China’s Tiananmen Square, the ethereal movie with its conflicted love triangle evokes Gattaca and, faintly, We the Living. As each of the three pure-minded youths faces the choice to sink into submission or rise to defiance, ultimately with Bridges as the Giver and Streep as the Taker of life, The Giver stirs the wise old soul to a knowing, bitter and almost breathtaking resolution.

But unlike its protege, it requires foreknowledge of what a society based on total state control means and it is too vague and unspecific in its beautifully rendered affirmations, which unfortunately include faith as a kind of innocent belief in the good, even though the tyranny of conformity depicted is impossible without widespread submission to belief without evidence. The three young leads are exquisite in their roles (especially Thwaites) and The Giver‘s allegory is a reward, with a well-integrated theme about doubt – Jonas asks “how do I know…?” and eventually the girl assigned as his younger sister stares ahead to no one in particular in open church and dares to ask “how do they know…?” – with lines of real affirmative power always emphasizing the role of free will, free choice and the individual’s right to assert it. The role of a single baby boy, too, the antithesis of what this monstrous anti-life feminist dystopia represents, is crucial and joyful at times to behold.

It is also impossible not to notice in The Giver, and this is one of my favorite aspects of Noyce’s poetic approach to the adaptation, that solitude is treated as sacred to man’s existence. That this comes in conjunction with a man’s unconquered delight at nurturing a child is a rare sight in today’s movies. It’s not enough to give The Giver what it needs the most: an explicit depiction of what the collective does to those who deviate from dictatorship. Still, it’s worth a look for individualists who know better and think ahead.