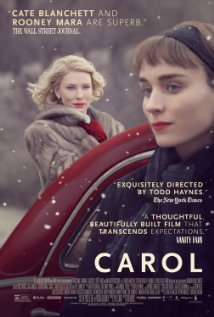 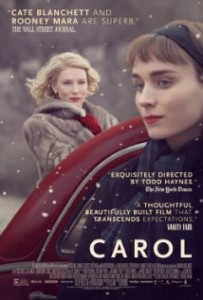 A new movie about two women in love depicts with effortlessness the veiled, secret desire of lesbians in the 1950s. Carol (The Weinstein Company, directed by Todd Haynes) is interestingly, obsessively nostalgic about its period and its dramatic purpose—to show a forbidden couple in conflict—though it is also nearly plotless.

They are also both true to life, so in Carol the characters, unlike the unlucky, tortured and persecuted men of Brokeback Mountain, are more easily masked and concealed and the lesbians are able to hide their sexuality in plain sight. The ending wordlessly hits with impact. After Friday’s Islamic terrorist attack on Paris, Carol‘s timing is perfect. Every infidel and, more broadly, every joy-seeking individual, now must learn to brace or conceal his pursuit of happiness—dining out, attending a concert or sport—unless, by some miracle, our civilization chooses to defend itself from the siege of barbarism.

Carol provides an elegant lesson in the success of secrecy, beginning with an emblem of forbidden love’s long, unpredictable plight. The first sound is the rhythmic roll of a train, steady, punctuated and purposeful, and the first image is that of an interlacing pattern of design. This is the introductory sensory material to the story of these two unusual women, played by Cate Blanchett (Cinderella, Truth) and Rooney Mara (The Girl with the Dragon Tattoo), who become an interlocking part of each other’s lives as they go barreling toward some common outcome.

Whether they end up like Ridley Scott’s Thelma and Louise is up to others, because it’s the 1950s, until and unless they make the matter up to them. Mara’s gamine shopgirl Terese only looks like Audrey Hepburn’s Holly Golightly in Breakfast at Tiffany’s; the style is similar but her substance is straighter, clearer and stronger. She knows what she likes and wants and is easygoing about paying the price of her ambition. She wears a uniform Christmas hat only after a stern spinster-type remands her to do so. She goes along with working in the doll department though she’d rather be working with train sets. Her boyishness is matter of fact.

Terese eyes Blanchett’s feline Carol one day over by the trains. She lets the glance across the space linger. She signals that she wants to play.

Carol’s been catting around enough to know when to pounce, so she stalks and makes her move. Terese is instantly drawn to the sensuality and, really in the most fundamental sense, she’s enchanted by Carol’s refusal to back down from getting what she wants. Terese is young and, with Mara’s doe-like eyes of innocence, she’s insatiable for a guide to getting what she wants in life. She has a boyfriend, she has a hobby—taking pictures—and she’s greedy. But Terese is also intelligent and she knows that she’s a work in progress. She knows that she does not know it all.

Enter the husky-voiced, lipsticked stranger who, when the two finally meet in semi-private, overenunciates her name with more drama than a Joan Crawford movie. All of this unfolds slowly, with bleak, hushed, moody colors, tones and details awash in Fifties sameness with the train as a gentle, clicking symbol that the furtive shadow dancing is coming to a climax. Their glances do the work of the homosexual flirtation toward sexual liberation. Their whispers do the work of what the words cannot say. Everything they suggest, mean and become to each other is in code.

Carol has a husband (Kyle Chandler) and a child and this complicates everything, too. The child is deeply loved by Carol, though the husband is not. That he knows this fact is the wispy plot’s central conflict. Sex stereotypes are reversed and the needy male— underrepresented in Hollywood movies—emerges as an ominous threat to Carol and her newfound union. Aiding and abetting Carol in the crime of lesbianism is her former lover, played by Sarah Paulson (Mud, 12 Years a Slave) in another knockout performance.

But Carol is not anti-male and, as she puts Terese in the Packard’s passenger seat and heads off on a frosty road trip, the wise, seasoned vamp must face and reconcile the consequences of making herself, a wife and mother, a forbidden object of desire for another woman. The secret gay union forges shortly after a stay in Chicago’s Drake Hotel, where Terese really starts to discover the world and the prospect of her place in it. Not surprisingly, reflecting today’s sexism against men, romantic same sex scenes are more revealing in Carol than those in Brokeback Mountain, allowing Terese and Carol fuller character development, which adds to the movie’s powerful conclusion.

You’ll probably hear a lot about this film’s perfect period detail—in record albums, dish patterns, make-up and costumes—and compliments are well deserved. But the nostalgia is not an end in itself; Carol‘s trains, designs and artifacts serve a subtle point in timelessness and director Haynes, with an adaptive screenplay by Phyllis Nagy, weaves it into the picture with intricacy and skill. The middle of the 20th century was an imprisoning time for the woman, straight or gay, as Carol demonstrates. But it also pegs a midpoint convergence of two types of women—the temptress using her feminine wiles and the working girl using her mind—and the emergence of courage and, really, fearlessness, required of the modern, liberated woman of the mind.

Add to that that these two happen to be gay and Carol pointedly if delicately dramatizes that gays have always been embedded among society. Given cultural mores, gay men were relegated to back rooms and dark corners and, to a large extent, they still are. Gay women have the play of the field. Witness the acceptance of DeGeneres, Foster and O’Donnell, a status that celebrity male homosexuals are rarely afforded without reduction. Women may couple up to dance and play at being lesbians at their discretion. Accordingly, and in sharp contrast to today’s near-total fetishization of the heterosexual woman as a macho archetype, Carol is a warm and evocative depiction of the discreet woman.

Its dreamy sense of timelessness underscores how changeable are the times in which we live. There’s an intriguing example of this in Carol, which places three American presidents in the picture in reverse chronological order: Dwight Eisenhower appears at first in a televised address about progress, hinting at the movie’s theme, then William McKinley makes an appearance in a room where the lovers first share an intimacy, and, finally, I think it’s Andrew Jackson who appears in a climactic scene in which one of the women chooses to break from society, at great cost to herself, in order to live an honest life.

The theme, newly relevant this week—I do not think this is the filmmakers’ intention—is that it is possible to pursue one’s happiness whether society is in regress or progress. In other words, accept the state of the world (in Carol’s case, certain conventions) and go after what makes you happy. Though there’s no guarantee that you’ll get what you want and there may be every reason to believe that the culture is very much against you, as Carol depicts with masterful detail, it is crucial to know that you must go after what you want—even in defiance of the entire world.