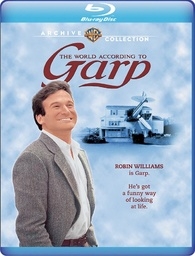 George Roy Hill’s 1982 adaptation of John Irving’s breakthrough 1978 novel, The World According to Garp, is better than its reputation. The Warner Bros. picture was a critical and commercial failure. Above all, this serious-themed movie—out this month on Blu-Ray—is seeded with ideas.

That the ideas involve sex, collectivism and death make The World According to Garp a culturally significant motion picture. With Hill (Hawaii, The Sting, The Little Drummer Girl) directing and a taut script by Steve Tesich (Breaking Away), the novel’s puritanical feminist mother to Garp (Robin Williams in his first major movie), portrayed by Glenn Close with perfection, sets the tone. The plain, Yankee frankness of seriously horrifying ideals mixed with perfectly reasonable ideals plays across Garp’s lifetime.

Garp’s mother is a rapist who compares sex with disease and, when her own son expresses the desire to gain new knowledge by asking questions, she cuts him down with a snap: “I’m tired of your questions.” She is both mother and monster. Garp’s mother violates his privacy, rescues him from danger and buys him sex from a prostitute and thus enmeshes Garp in the crazy making of her life. This is Irving’s absurdism but it is also the stuff of life. From a former top athlete who becomes a transsexual (John Lithgow) to Garp’s starch grandparents (Hume Cronyn and Jessica Tandy) and a reckless driver (Matthew Cowles), colorful characters depict various contradictions of our time.

The story is brilliantly anti-sexual in a fundamental sense, though it is captured in a way which, thanks to Robin Williams and his co-star Mary Beth Hurt as his college professor wife Helen, is compelling. Their troubled marriage thoughtfully comes undone amid conflicting career goals and frustrations, as each wrestles with anxiety over kids, fear of death and balancing love, work and life. Living with the insecure writer, or the academic constantly tempted by youth, and making “the kids” a rationalization for denial, are all dramatized with skill and humor. From the hilarious definition of “gradual school” to an uncomfortable scene between the babysitter and Garp, in which he salivates at her being 18 while she salivates at his being 30, Garp is honest, clear and insightful.

It makes the audience think.

But Garp is best in its anti-sex theme showing the mass contradiction of feminism, a collectivist offshoot defining one’s identity as based on one’s sex, an idea which was widely accepted and only spread after the bestselling novel was adapted. The women’s-only coastal compound where Garp’s evangelistic mother nurses her adherents back to health, from the tough-but-kind, and notably unsatisfied, transsexual to the man-hating women who mutilate themselves as martyrs for the feminist faith, is both prison and sanctuary. The place is peaceful, decent and it’s where Garp goes to heal, thanks to his mother in a final act of enlightenment.

Garp’s Kennedy-like compound is a transient place of irrationalism, where the wicked and the wounded alike are housed, granting refuge to the absurd and tolerance to society’s most vulnerable victims. The World According to Garp co-habits the 20th century’s worst ideas, including pragmatism, fatalism and self-sacrifice, and thus reflects the United States of America. That the practitioners are women seeking to rule men is especially astute.

This is not to say that Garp is explicitly anti-feminist, as Irving and Tesich merely send feminists up for the sake of humor. In one transition, Roberta Muldoon is maiden to Garp’s boys during child’s play. In the next scene, Helen capitulates to playing maiden in need of rescue for real to one of her students. Sexual stereotypes self-perpetuate; Garp’s women, even his stubborn mother, have a point.

Faith breeds force, as Ayn Rand once wrote, and brute force takes its toll, though Irving probably does not intend this as the meaning of Garp. The subtext is there, however, instilled in dark, strange and almost surrealistic plot points, which are possibly too serious and tragic for most, except the most damaged. It calls out life’s absurdities, such as the iconic plane striking the house, and beckons the weird to face the strange, as David Bowie sings in “Changes”, and embrace the byproduct of mixed ideas: the unusual, even the painful, hard and terrible.

In the character Pooh Percy, the archetypical arch-feminist, who is also a sociopath, one sees the full arc of Garp‘s clearly dramatized sub-theme that, while life should be lived as an adventure, which in this context means embracing uniqueness including any contradictions, ultimately man is doomed by the irrational. Whether this is true (I think it’s false), one can take it, even on Garp‘s terms, to mean that man’s only doomed to self-terminate to the extent he sanctions the irrational. Pooh Percy is a feminist in glasses and pigtails taken to the logical application of her ideals. A line early in the movie indicates that Pooh’s mother implants the child with hatred of her own sex and life and one wonders what else might have happened to this child, especially since her father is a malignant if minor character. Pooh is like an Islamic fundamentalist trained from scratch to be like a laser-guided missile to destroy sex, love and life. To Pooh, values are poison; she is like an automatonic assassin programmed for death. Watch Pooh for a lesson in what happens when decent people refuse to think, judge and speak up about the judged.

Garp is not, contrary to some assertions, flat, terrible and deadly. Certainly, Garp is mixed. The theme is not positive. Yet intelligent ideas about writing permeate the movie. From the gloves in a story Garp writes and the role of the piano in his self-recovery to the sound of a typewriter’s keys at Christmastime, this is an involving depiction of the writer’s life in stark, dramatic detail. It is possible to live a meaningful life in The World According to Garp, with the richest rewards coming in the most surprising places, times and gestures. Garp’s greatest literary achievement finally comes as a result of Garp’s greatest risk. His payoff comes in a most unwelcome context with a character played by Amanda Plummer. It’s a poignant moment which captures Irving’s brand of misfit individualism. Taking the tragic as a metaphysical primary, Garp proposes that one’s life soars only before the downfall.

This makes The World According to Garp a timely, thoughtful movie not without merit which is thoroughly modern, and prophetic, in its malevolence.