My title for this post refers to what’s essentially the impetus for a new book, pictured here, by my editor and friend David Sweet. I haven’t yet read Three Seconds in Munich though it’s on my reading list, which is impossibly long.

Sweet was my sports editor at the Glendale News-Press during the 1990s. We became friends and have since worked on many assignments, including a series of regional history articles for a publication in Chicagoland. Read my review of Sweet’s debut book, a biography of Lamar Hunt, the man who invented the term Super Bowl, here. 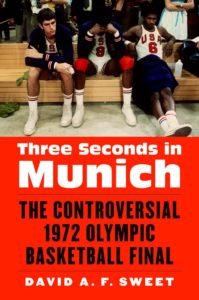 Sweet’s followup is a work of new non-fiction. This time, he writes about the 1972 Munich summer Olympics. I remember them well (read my remembrance here). However, I did not exactly recall the untold story of the U.S. basketball team’s victory over Soviet Russia, a gold medal win which was denied to the U.S. Olympians for reasons Sweet explains in detail, with notes, bibliography and an index.

What’s more, he integrates the tale of this amateur athletics injustice with the horror of the Arab terrorist siege on the Olympic village. I know this because the author asked me to find, investigate and research and, if possible, interview men on the U.S. basketball team, one of whom I was able to persuade to conduct an interview. On the record, one of America’s Olympics basketball players recounts his memory of the controversial game and his encounter with Palestinian terrorists as they forced Jews onto mass transit toward what would become their mass execution in Germany.

“They’re all gone,” ABC Sports journalist Jim McKay told the television audience that summer in 1972. McKay was referring to the 11 Israelis who’d been seized by Arab terrorists and were then slaughtered in an act of war which was never avenged. Steven Spielberg made an awful, pro-Palestinian movie about Israel’s pinprick response to the siege by Black September (read my review of the 2005 film Munich). Documentaries also account for the assault. Only David Sweet, with a little help from yours truly, contextualizes this act of terrorism within the arena of sports.

Look at Hong Kong, relinquished by the British to Communist China in 1997, for an example of the appeasement that the West’s response to Palestinian terrorism at Munich set forth. Mass murder in Munich was, as I’ve written, an early strike in the Arab-Islamic axis of terrorism. That Israel accommodated Arab demands and negotiated with terrorists cast as standard practice the West’s appeasement of thugs.

Sweet focuses on what the world’s best athletes came to do in Munich: compete in sports. The Americans (and Israelis) did. Despite being thrust, one of the Americans at gunpoint, into an act of war, the Americans won. In the passion of athletic triumph, this band of Americans was robbed of what they earned when they defeated the Communist regime that had funded the terrorists that, in turn, gunned down the Jews.

To this day, the U.S. basketball team accepts nothing less than victory. The whole team refuses to accept anything but the gold medal they rightly won in that game with the Soviets. With his new book, Sweet offers a counterexample to both that singularly evil act of Soviet-made Palestinian terrorism and the debacle which has been Western appeasement. In Three Seconds in Munich, David Sweet chronicles the mens’ team journey, game and unified act of principle for the first time.