In a 1935 photograph of Soviet spy Noel Field at a London disarmaments conference — Field had been recruited by Soviet Russia to spy on the United States of America — his lantern-jawed face contains the faraway vacancy of one who knows he’s too far gone. Field, who never showed remorse for his crimes or renounced his admiration for Stalin, was part of the same Soviet spy cell with Alger Hiss and Whittaker Chambers, who outed them both, in Washington, DC. 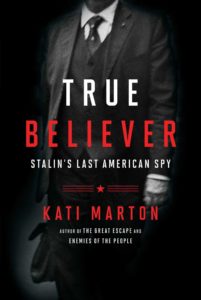 The picture’s included in True Believer: Stalin’s Last American Spy, on sale in paperback next week. In it, author Kati Marton tells Field’s dark, horrifying story of Communist faith and fanaticism. Though she tends to romanticize his suffering and makes the common mistake of granting good intentions for his idealism, despite evidence to the contrary, True Believer demonstrates that Noel Field, an American who passionately spied for Soviet dictator Josef Stalin, ruined his family and believed in Communism until the very end, when he was kidnapped and tortured by the KGB and forced to testify against his Communist comrades in one of Stalin’s show trials. In particular, she discloses that Field’s work with the Unitarian Church was a front for helping Soviet Russia and resulted in at least one murder, proving once again that, as Ayn Rand observed, faith and force are “the destroyers of the modern world.”

How a Harvard-educated, State Department employee became friends with Alger Hiss and made himself a Stalinist is True Believer‘s focus, starting in earnest with the Red Decade, the 1930s, when Field enlisted in the International Communist Movement, which New York City-based author Marton partly blames on U.S. evasion of the rise of European fascism. Author and reporter Marton, the child of a Hungarian political prisoner whose parents found and spoke with Field in the only press interview he ever gave, is author of several books.

In often engaging narrative detail, she traces Noel Field’s presumed pursuit of a meaningful life using access to Soviet Secret Police records, the Field family’s correspondence and historical research and reports on Communist spy Hiss, CIA Director Allen Dulles and, of course, Stalin, the bloodiest monster of the 20th century. True Believer: Stalin’s Last American Spy — published in softcover by Simon & Schuster and available on Sept. 19 — accounts for this faith-based little monster’s pathetic life of crime, treason and evil in what amounts to another volume documenting Stalin’s mass murder and the full force of Communism with notes, bibliography, photos and an index.