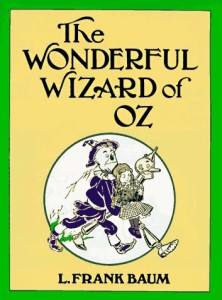 In the introduction to The Wonderful Wizard of Oz by L. Frank Baum, illustrated by W. W. Denslow, the Chicago author writes that he aspires to create a “modernized fairy tale, in which the wonderment and joy are retained and the heart-aches and nightmares are left out.” Since it was published in 1900, his Oz stories, and this one in particular, have earned an enduring literary and cinematic legacy. Whether Baum achieves his goal is open to debate. But his main character, Dorothy, embodies the virtue of loyalty to herself in this coming of age tale about developing good character as the essence of adulthood.

Not that Baum had that in mind or even explicitly identifies the theme in his short children’s novel (I read the Signet Classic edition). But that’s what his fairy tale means, with Dorothy, who lives “in the midst of the great Kansas prairies, with Uncle Henry, who was a farmer, and Aunt Em, who was the farmer’s wife”, as the child on the brink of becoming an adult. As in MGM’s classic 1939 musical, her loyalty to herself is often displayed through her fierce protection of her smart and scrappy little dog, Toto.

The fantasy’s three wise men, Scarecrow, Tin Man and Cowardly Lion, carry the action throughout the strange, dark world of Oz. Baum’s original tale is less fanciful than the film, of course, without music and Technicolor and with the Wicked Witch of the West relegated to a single short section toward the end of the story. Here, unlike the film, the witch does not track the quartet with a crystal ball; their misfortunes and challenges arise organically most of the time. This allows for the depth of characterization that comes from a resourceful trio that each already embody the qualities they seek.

For example, Scarecrow confides to Dorothy that, with his head filled with straw, he wonders: “how am I ever to know anything?” The Tin Man, among the most developed characters, tells her that when he was a woodsman, he fell deeply in love with a Munchkin girl that lived with an old woman who “was so lazy she wished the girl to remain with her and do the cooking and the housework.” Intent upon stopping their union, the old woman enlists the Wicked Witch, who keeps cutting off the man’s body parts until his whole body is made of tin. But he keeps coming back until, finally, the girl cannot return the love of the one who is no longer the man with whom she fell in love. One day, it rains and he is left without his oilcan to rust in the woods. As the Tin Man tells Dorothy: “It was a terrible thing to undergo, but during the year I stood there I had time to think that the greatest loss I had known was the loss of my heart. While I was in love I was the happiest man on earth…”

The Cowardly Lion, too, considers himself deficient in certain ways while struggling to find courage. Each of the three represents the three basic literary conflicts; Scarecrow, who through no fault of his own is born without a brain, represents man versus nature; Tin Man, who is decapitated by an old woman’s wicked accomplice, represents man versus man and the Cowardly Lion, who goes after little dogs to mask his own fear, represents man versus himself. With Oz as the place to get mystical resolution, each eventually discovers that there is no such thing. Instead, they learn that it’s a hard life and that they will have to achieve their fullest virtues in action and earn their way to a joyful life. As the wizard, who is flawed but kind, tells Dorothy, “everyone must pay for everything he gets. Help me and I will help you.”

For her part, the witch is cruel. When she learns that the girl whose house landed on and killed her sister is traveling with an entourage, she tells a pack of uber-wolves: “Go to those people and tear them to pieces.” The witch is both magical and evil but her powers are less than omnipotent and, as a villain, she is an ultimately small and insignificant slavemistress. The violence depicted is jarring and the subtext of a modern girl trying to make sense of the world around her is compelling, and, if Baum’s story remains unusual, dark and strange, it is also engrossing and still relevant over 100 years after it was published. The theme of making one’s own character in a cruel yet beautiful world remains a striking piece of fiction, especially for a character that’s a girl. At one point, take-charge Dorothy, whose journey in Oz differs in significant ways from the MGM film adaptation, steps up and plainly asks: “Can you straighten out those dents in the tin Woodman, and bend him back into shape again, and solder him together where he is broken?” This can-do Midwestern spirit permeates a classic American children’s tale.