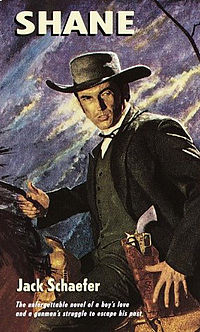 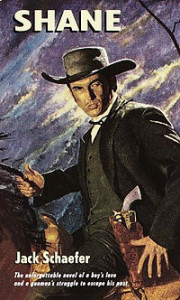 Published in 1949, Shane by Jack Schaefer is an uneven but irresistible Western about a boy’s coming of age. With elements of hero worship, the short novel is narrated in retrospect by a Wyoming homesteader’s son named Bob, an only child whose parents take kindly to a dark stranger with a mysterious past.

The child describes Shane as possessing “a kind of magnificence”: “He rode easily, relaxed in the saddle, leaning his weight lazily into the stirrups. Yet even in this easiness was a suggestion of tension. It was the easiness of a coiled spring, a trap set.” When Shane agrees to stay on the farm and whacks at a stubborn old tree stump as he bonds with Bob’s father, Joe Starrett, amid a looming property dispute with a bullying cattle driver, the boy’s mother questions whether any of this is good for the family, including the boy and especially Shane, whom she and everyone falls for in a way.

It’s all there in Schaefer’s clipped prose. Even the kid is aware that, for all the mastery, fancy duds and shiny gun, “it puzzled me that a man so deep and vital in his own being, so ready to respond to father, should be riding a lone trail out of a closed and guarded past.” Tension builds as the cattleman villain, who seeks government contracts, taunts and baits Shane into a confrontation that envelops the whole town. As Joe watches over his property, the wife worries, the kid snoops and the cowboys, townies and homesteaders take up sides. The loner contemplates whether taking on the villain is worth being thrown off his own trail.

As the narrative alternates between life at home with Shane and the parents and the gathering storm, suspense builds and the boy learns life lessons from the man he idolizes. That Shane is portrayed as a better man than Bob’s father complicates and limits the story and makes it too elusive to have a lasting impact but there is good writing here. “Listen, Bob,” Shane tells the kid one day. “A gun is just a tool. No better no worse than any other tool, a shovel — or an axe or a saddle or stove or anything. Think of it always that way. The gun is as good – and as bad – as the man who carries it. Remember that.”

Schaefer interjects Shane into the Starrett family with aplomb and the result is a complex portrayal of a young Western family at the mercy of a stranger, which is what makes Shane a rare psychological mystery about how he impacts the boy, the Starretts and the town, which is “still not much more than the roadside settlement”. The character, portrayed by Alan Ladd in the 1953 motion picture version, is so remote as to render the plot almost surrealistic, though when he lets loose, Shane comes into focus. “And then the summer was over,” Schaefer writes in a plain, evocative transition. “School began again and the days were growing shorter and the first cutting edge of cold was creeping down from the mountains.” The way out West stays and lingers in Shane, culminating in a conflict that shapes a landscape, a family and a man and, mostly, delivers a simple campfire story that’s well told.