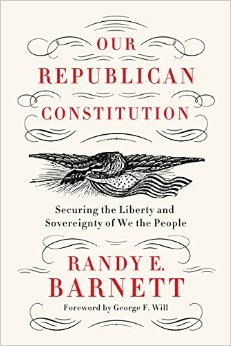 Taking account of the United States Constitution, Georgetown University scholar Randy Barnett, whom I interviewed about ObamaCare after it became law (read it here), makes the case that this historic document is essentially republican in his simply titled new book, Our Republican Constitution: Securing the Liberty and Sovereignty of We the People.

The author proves his thesis. It’s worth mentioning the book’s problems, however, which, in general, are to be found with works by most right-wing, libertarian intellectuals: the intended audience appears to be fellow libertarians and conservatives, so the assumed context of knowledge may not apply to the leftist, liberal or general reader. Also, given the dense material, certain sections are uneven. Barnett writes like the legal scholar he is, so the back and forth can be exhausting. And, as he did in our interview about ObamaCare, Barnett declines to name the correct moral premise of his argument.

With the republic urgently at stake, though, Our Republican Constitution is extremely informative and Randy Barnett makes a powerfully important case for activism in order to save the American republic. He accomplishes this by reducing multiple ideas, if circuitously, to the rights of the individual.

As he observes in the introduction:

From here, incorporating the ideas of John Locke, Montesquieu and Jean-Jacques Rousseau, Barnett tells stories based on facts, quotes and history, of American government in decline, from major mistakes during the nation’s founding to the suspicious Supreme Court decision to uphold ObamaCare, in which he notes that “it was reliably reported” that the nation’s Chief Justice—conservative John Roberts—switched his vote on the individual insurance mandate, possibly due to intimidation.

The central conflict in Our Republican Constitution is between these two opposing views, the Democratic Constitution—”first comes government, then come rights”—tied to Rousseau’s notion of the General Will, which Barnett eviscerates, and the premise of the Republican Constitution: “first come rights and then comes government.” After outlining his case with ample historical sourcing and documentary evidence, the author sets it up, asking the reader: “Were the founders really against democracy? You bet. They blamed the problems in the states under the Articles of Confederation on an excess of democracy.”

Differentiating between both sides’ views of popular sovereignty, which he acknowledges are both consistent with the idea of representative government, Barnett breaks down the story of slavery in the United States, which he develops throughout the book. He points out that Democrats defended slavery as a form of socialism, as against capitalism, because, Democrats argued, slaves are cared for from cradle to grave. He digs into details and aspects of whether, “given the sovereignty of the people as individuals, the people cannot be ‘presumed’ or ‘supposed’ to have confided in their legislature any power to violate their fundamental rights.” The answer is No.

Not according to Democrats, of course, who believe that a majority of the people gets to speak for everyone (President Martin Van Buren’s idea of democracy, he writes, was close to Rousseau’s: “He ‘seems to have conceived of the democracy almost as a unified body with a single true will’). Barnett adds: “And the majority, if it wishes, can even authorize the enslavement of the minority!”

Along the journey, which is in turns jaw-dropping, illuminating and, given today’s political context, terribly depressing, the reader learns about an Ohio senator who, in 1854, demanded to know “[w]hat kind of popular sovereignty is that which allows one portion of the people to enslave another portion? Is that the doctrine of equal rights? Is that exact justice? Is that the teaching of enlightened, liberal, progressive Democracy? No, sir; no! There can be no real democracy which does not fully maintain the rights of man, as man.” Or that the Civil Rights act of 1866 granted that:

citizens, of every race and color, without regard to any previous condition of slavery or involuntary servitude…shall have the same right…to make and enforce contracts, to sue, be parties, give evidence, to inherit, purchase, lease, sell, hold, and convey real and personal property, and to the full and equal benefit of all laws and proceedings for the security of person and property, as is enjoyed by white citizens…any law, statute, ordinance, regulation, or custom, to the contrary notwithstanding.

Midway through Our Republican Constitution, it is evident that that’s not the civil rights act that today’s students learn about in state-controlled U.S. history classes (to the extent American history is taught in government schools) and the state of the union today might be very different, which is to say better, if they did!

Piling on shocking tales of early American acts of anti-capitalism, Barnett goes on. Democratic Constitution proponents include Democrats, Rousseau and Oliver Wendell Holmes, whom Barnett demonstrates believed that “if there exists anyone who is rational and fair who thinks that a measure is constitutional, then it is.” Other arch-opponents to a republican Constitution were Woodrow Wilson, who sought to subject America to parliamentary rule, and Theodore Roosevelt who once said of the judiciary: “our prime concern is that in dealing with the fundamental law of the land, and assuming finally to interpret it, and therefore finally to make it, the acts of the courts should be subject to and not above the final control of the people as a whole.”

After establishing the arguments for and against and setting the contrast, the Georgetown University professor sums up the cold, hard truth that America’s “system of voting does not [in fact] allow the sovereign people to ‘rule,’ and it is a pernicious myth to claim that they do.”

Though he never fundamentally, philosophically challenges “the social compact” or General Will, it’s easy to apply the detailed, persuasive points of Barnett’s thesis to today’s ominous possibilities. The prospect of Donald Trump‘s proposed strongman rule comes to mind as Barnett quotes Montesquieu, who explained that: “There is no liberty if the judiciary power be not separated from the legislative and executive. Were it joined with the legislative, the life and liberty of the subject would be exposed to arbitrary control; for the judge would be then the legislator. Were it joined to the executive power, the judge might behave with violence and oppression.”

Barnett delivers a good explanation of the rise of the omnipotent state, closing the loop with an excellent summary and warning from Supreme Court Justice Clarence Thomas:

we have too long abrogated our duty to enforce the separation of powers required by our Constitution. We have overseen and sanctioned the growth of an administrative system that concentrates the power to make laws and the power to enforce them in the hands of a vast and unaccountable administrative apparatus that finds no comfortable home in our constitutional structure. The end result may be trains that run on time (although I doubt it), but the cost is to our Constitution and the individual liberty it protects.”

To his credit, Barnett, who has written several Constitutional volumes and whose new book includes a foreword by George Will, is aware that this thoughtful, timely and intelligent book isn’t exactly what you’d buy for reading at the beach—after one section, he admits that “perhaps you had difficulty even following it”—but he doesn’t identify the ends where we’re heading, merely referring to “whatever progressive political agenda may be at any given time”. Our Republican Constitution would benefit from stronger connecting of the dots, as Barnett himself seems to grasp. For instance, perhaps sensing that an outright socialist such as Bernie Sanders might follow the disaster of a Trump or Clinton presidency, he rightly observes that “[f]or our modern-day progressives, what matters is the end, not the means. Social justice, not democracy.”

Though he does not spell out what this really means in practice, let alone demonstrate why socialism is evil, a chronic libertarian deficiency, and in the following chapter, he magnifies the minutiae, Randy Barnett leaves the reader with an abundance of historical facts and useful intellectual weapons with which to fight for Our Republican Constitution, all but daring the reader to use it or lose it with the words of President Calvin Coolidge: “We live in an age of science and abounding accumulation of material things. These did not create our Declaration. Our Declaration created them.”

And, while his defense manual for “securing the liberty and sovereignty of We the People” was undoubtedly written before the rise of the orange-haired, state-bred crony and the impending end of the Republican Party, Barnett clearly anticipates danger ahead. Referring to Coolidge’s above quote on freedom as the precondition for progress, Barnett boldly concludes that “we need a Republican Party that can say this, understand this, and truly believe this once again – and, if not the existing Republican Party, then a new one to replace it.”

With an index, extensive notes and a poignant acknowledgment of his father, a victim of Alzheimer’s—”this book is dedicated to the memory of the man who had the greatest influence on my political convictions: my father and personal hero, Ronald Evan Barnett — who was a true “Republican” as I am defining the term”—Our Republican Constitution is a thoughtful Father’s Day present and an eye-opening self-defense for the rational American which offers historical enlightenment about America’s true origins.