Book Review: I Never Knew That About New York 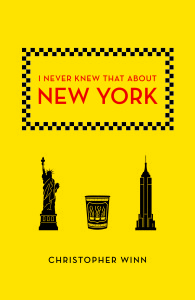 The first cafe to serve cappuccino in America, Cafe Reggio, established in 1927 and featured in 1970s movies such as Shaft, Serpico and The Godfather Part II, is among the scads of trivia in the always enjoyable if not comprehensive I Never Knew That About New York by Christopher Winn, whose I Never Knew That… series is also nicely illustrated by his wife, Mai Osawa. The book goes on sale today.

For first-time visitors, longtime residents or those like me in between who have had an on-again, off-again relationship with America’s greatest city, this $16 paperback packs facts, stories and information into its pages. Lord & Taylor was the first store to introduce Christmas window displays, for instance, which one learns in an entry on Fifth Avenue. Most bits are included as stand alone paragraphs, though the book is separated by geography and includes essays, sidebars and longer but still short histories such as the bit on the New York Public Library.

I Never Knew That About New York contains morsels that may inform even the lifelong New Yorker. Did you know, for instance, that the Statue of Liberty’s real name is “Liberty Enlightening the World” and that Statue of Liberty is a nickname? You may know that Columbus Circle is the point from which all official distances to and from New York are measured, as Winn writes here, but do you know that the world’s first cinema opened in New York inside a converted shoe store? Among my favorites is a listing with online and physical addresses of places that are open to the public, from the J.P. Morgan Library and Columbia University to the New York Federal Reserve Bank and the Empire State Building. Neither encyclopedia nor travel guide, this hybrid of condensed histories is useful and interesting to everyone who loves New York