Book Review: Me by Elton John

Every adult who reads can probably gain from reading Me by Elton John. It’s not that what he writes about his music, work and life is especially philosophical, though there’s reflection and insight in what he writes. It’s not that his autobiography is salacious, “juicy” or filled with shocking details, though he writes about show business, being gay and struggling with severe drug and alcohol addiction, so there’s plenty of shock. What moves me about Me is his remarkable ability to express why he finds inner strength in flaws and insecurities — Elton John doesn’t neatly wrap, curl ribbons and package it like that — and come out an egoist. 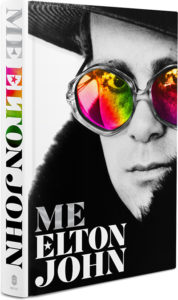 Of course, he never uses that word. But, like the movie that his husband David Furnish produced about his life — Rocketman, hands down this year’s best motion picture — expressing selfishness as a virtue is crucial to what makes the audience rapt with attention. Egoism powers every tale of why and how he studies lyrics, thinks about composition, hides from humanity, feels ashamed, dresses up, has another drink, cuts lines of cocaine, jumps on the piano, dazzles thousands at Dodger Stadium and sees in meeting Elvis his dark and lonely future.

I suppose the value of Me depends to a degree on what you know about Elton John and whether you like his music, which spans half a century from the intimacy of “Tiny Dancer” and pop masterpieces “Crocodile Rock” and “Elderberry Wine” to the majestic introspection of “The One” and “Home”. Here is an artist who met, performed or composed with and survived the greatest and most enduring musical artists of our time — Elvis, The Beatles, Whitney, Michael, Prince — and lives to tell.

This should not be taken lightly. If you know or want to know about the culture since the 1960s and how one man who is among the wealthiest, most accomplished and powerful artists of the modern era escaped the self-sacrifice destroying civilization, read Me.

I think you’ll be amazed. I am, even as I write. Having lost loved ones to alcohol, drugs and various means of trying to evade reality, the greatest of whom introduced me to Elton John as a boy, I was already in awe of his courage, heroism and life. Me gives new reasons to look up to Elton John.

I also think you’ll laugh out loud. With help from writer Alexis Petridis, a journalist he acknowledges and thanks, Elton John’s dry wit entertains. His humor never denigrates or detracts. He winks more than he digs, often with cliches and metaphors, which makes his side lines more enjoyable because you know they’re not the point. Each of these lines made me laugh, sometimes while reading to the point that I had to put the iPad down and wipe the tears.

Rarely are there tears of sadness, though the second half of Me is rightly more somber as Elton John delves into details of his fall and rise. This is old hat if you’ve been there — to AA meetings, to interventions, grasping for the phone at three in the morning, stumbling to the toilet the morning after (or an hour after you’ve emptied a bottle into your bloodstream) — and you’ll breeze through Me like a roughened roadie on tour. If not, you’ll know that you’re blessed to not know what you don’t know and you’ll more deeply appreciate who you are knowing who he is and has chosen to be.

Like all great stories, well, my favorites anyway, Me by Elton John is a story of the self-made man. As such, it is riveting. I was never exhausted while reading. I was gripped. Not only for personal reasons and never for curiosity in some lewd or peculiar detail. So, bitchy gossip types need not read this book—Me is not for them—and neither should their flipside doppelgängers, rationalistic bean counters that disdain anything but worshipping at the altar of trivia, statistics (pardon me, “metrics” and “analytics”) and neverending streams of pictures, games and nonsense.

Me, like Rocketman, is for the reader who thinks … for himself.

When Elton John does indulge in celebrity stories, and he covers all the known feuds, snubs and controversies, from Liberace to Madonna, it is never with a snivel or a sneer. He’s never the bitchy queen though he’s the first to admit that, at times, at his worst, he has been. Instead, he writes with ease and a sense of purpose as he looks back with clarity and humor — and he gets to the point. For example, reflecting on his eccentric wardrobe and his career’s catapult in Los Angeles, he writes:

The clothes from Mr Freedom weren’t outrageous because they were sexy or threatening, they were outrageous because they were larger than life, more fun than the world around them. I loved them. Before I went onstage at the Troubadour, I put them all on at once. So instead of an introspective hippy singer-songwriter, the audience were greeted by the sight of a man in bright yellow dungarees, a long-sleeved T-shirt covered in stars and a pair of heavy workman’s boots, also bright yellow, with a large set of blue wings sprouting from them. This was not the way sensitive singer-songwriters in America in 1970 looked.”

That’s certainly true and John’s candor and insight shows a glimpse of the root of his appeal as a showman, as a composer, as a performer. His combination with the brilliant — Elton John at his saltiest might say fuckin’ brilliant — Bernie Taupin often writing lyrics with John’s astute sense of his audience, culture and the world at large, including what it needs in romanticism, is awesome. This is impossible to overstate.

The above quote subtly shows his disregard for the avant-garde, the pretentious, the chattering dilettante set and their darlings, including their penchant for holding up radical New Left terrorists, hippies and wannabes. Whether he knows it, and Me only barely implies that he does, Elton John the star stands opposed to that ethos. Me reflects this over and over.

Whether he’s adopting rapper Eminem as an AA charge, performing with pride at Rush Limbaugh’s wedding — and being handsomely paid for the endeavor — or refusing to profit from friends John Lennon’s or Princess Diana’s deaths, Elton John in Me writes as a man acting on principle.

This makes his memoir more enjoyable. Aside from learning details about his most indelible songs, concerts and famous friends, partners and meltdowns, John brings a brisk but substantial flair — not flamboyance — to the story of his life until now. Every flaw, every fact, every major chapter — from performing at the Troubadour in LA to suicide attempts and the agonizingly total detachment from his unloving parents — gets its due.

Ultimately, his life also gets his unyielding judgment. As he writes about his notorious shopping and tendency to bestow those he loves with gifts:

Over the years, I’ve had therapists tell me that it’s obsessive, addictive behaviour, or that I’m trying to buy people’s affection by giving them gifts. With the greatest of respect to the members of the psychiatric profession who have said that sort of thing to me, I think that’s a load of old shit. I’m not interested in buying people’s affection. I just get a lot of pleasure out of making people feel included or letting them know I’m thinking about them. I love seeing people’s faces when you treat them to something.”

Accordingly, he concludes with an estimate of his own value to himself:

I earned that money by working hard, and if people think the way I spend it is excessive or ridiculous, then I’m afraid that’s their problem. I don’t feel guilty about it at all. If it’s an addiction, well, I’ve been addicted to far more damaging things over the years than buying tableware and photographs. It makes me happy. You know, I’ve got 1,000 candles in a closet in my home in Atlanta, and I suppose that is excessive. But I’ll tell you what: it’s the best-smelling closet you’ve ever been in in your life.”

Elton John writes about the late Ryan White, who changed his life, and his efforts to eradicate the scourge of AIDS. He acknowledges and, strictly as deserved, pays tribute to his band, the elusive and mythical countryside Englishman-turned-American cowboy Bernie Taupin, his ex-wife, his ex lovers, his family, friends and business partners. He writes about everything you can imagine: “Honky Cat”, Lady Gaga, scoring The Lion King, composing Aida with Tim Rice, touring with an orchestra, playing piano, his sexual voyeurism, “Philadelphia Freedom”, observing Freddie Mercury on his death bed, trying to save George Michael from himself, going live with Aretha, making an album with Leon Russell, how he met the man who’d become his husband, his horrifying mother, his record album triumphs including The Diving Board.

In essence, it is as though Elton John, whether drunk, stoned or sober, grabbed the traditionalism (really, religionism) being shoved down his throat and crushed it with his bare hands, and that he did so at the risk of destroying himself in the process. As an artist, a craftsman, just as he took movies, albums, shows and Bernie Taupin’s poetry, he then proceeded to remake these bad traditions, ideas and practices and repurpose them into a radically new and improved approach to making a life of his own.

He’s done it—he did it—and this in reading Me is why you begin to realize how he came to be including why he came to be among the only Seventies superstars to make it out alive.

That this alcoholic and drug addict, working man and titan of industry, lifelong soccer spectator and pro sports team owner, husband and father lives to tell this tale is itself a testament to what he calls in the dedication his amazing life. Me is simple, humorous and, fundamentally, because he refuses not to see that  “the sun’s been quite kind”, an absolute joy to read. The book lives up to the glory of its unrepentant and egoistic title, like a song graced by piano sung in his soulful voice, holding on exactly the right notes in perfect harmony.