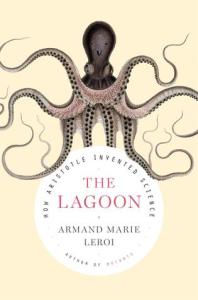 Examining Aristotle with wonder, admiration and scholarly attention to detail, biology professor Armand Marie Leroi creates a fascinating account of how he thinks Aristotle invented science in The Lagoon (Viking, $27.95), which goes on sale this week.

The writing is excellent because it serves the storytelling. So, while this is a meticulous work, it is not pompous or too technical, though of course this depends upon one’s interest in and knowledge of science. Teeming with questions about reality, nature and life, London-based BBC commentator and science writer Leroi delivers a leisurely, structured narrative of Aristotle’s favorite subject, biology, and Aristotle’s focus on the animal’s life. Retracing geographic points of study and discovery, he covers Aristotle’s writings in detail, errors and breathtaking observations and advancements alike, with reverence for the father of Western philosophy.

For example, after taking the reader through citations, tales and journeys into Aristotle’s pursuits, Leroi concludes that Aristotle’s ethics underscore his passion and amount to the idea that:

The best way that a man can spend his life is in contemplation for that has no utilitarian goal; it’s pleasurable in itself. Elsewhere [Aristotle] relates a story. Someone asked Anaxagoras what was the point of being born, to which the great physiologos replied: ‘to study the order and heaven of the whole cosmos’. The answer rang true to Aristotle; he told the story at least twice. But he warns that none of us can ever achieve a life of pure contemplation. There are so many things, the mundane things of everyday life, and the human things—the sense is disparaging—that distract us from the divine life of the mind. Nevertheless, we should ‘strain every sinew’ to ignore them and devote ourselves to pure reason. That is where true happiness lies.”

For his part, Leroi observes that: “Had I a God—had I a God—it would be Aristotle’s God.” The Lagoon finishes telling a compelling story, which is really a tale of Western civilization, about renting buildings at the Lyceum, teaching and, always, seeking to know more to live life here on earth.

“In our day,” Lerio asks in conclusion, “philosophers and scientists are distinct academic castes with distinct ways of arguing. But who is to say that, more than two thousand years ago, a man could not be both at once?” With glossaries, appendices, notes, bibliography (including a volume by Aristotelian scholar Robert Mayhew) and an index, The Lagoon is an Aristotle story well discovered, considered and told.