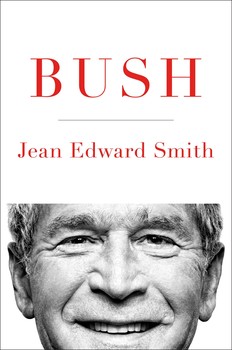 The reader learns about Bush’s life, career and disastrous presidency and other judgments about Bush’s mistakes, flaws and decisions are clearly outlined, reported and analyzed. I did not know about Bush’s business deals with George Soros and Saudi Arabia, for instance, or that his father, George H. W. Bush the 41st president—the one who refused as president to defend the United States and American booksellers against the Islamic terrorist threat by Iran during its fatwa against British author Salman Rushdie—had lived in Compton. Or that Bush, known as 43, Dubya or “W”, praised preacher Billy Graham for leading Bush to believe in God, believed he was God’s messenger and had concluded that he “could not have stopped drinking without faith.”

The degree of the U.S. government’s entrenched cronyism is staggering, as Bush illustrates time and again. Besides Soros, Saudis and familial connections to Connecticut’s Senator Prescott Bush, Florida’s Governor Jeb Bush and the former U.S. president, Bush connects to major power sources. CBS News journalist Bob Schieffer’s brother Thomas, for example, a former Democrat in the Texas legislature, was the Texas Rangers’ “point man” on negotiating the special deal for a new ballpark when Bush owned the baseball team. Reading Bush, every chapter seems to disclose another major government-connected or state-sponsored instance of favoritism. When Mr. Smith makes reference to what someone describes as the “one-syllable guttural chuckle, a ‘heh’ straight out of Beavis and Butt-head“, the reader is reminded that Bush’s frat boy persona is backed by enormously powerful crony connections.

Some of those connections might have served the president and America’s best interests. For example, Smith notes that Bush wanted FedEx founder and CEO Fred Smith, who was two years ahead of Bush at Yale University in Connecticut and, like Bush, was a member of Skull and Bones, as secretary of defense. Fred Smith had served as a Marine in the Vietnam War, and won a Bronze Star, Silver Star and two Purple Hearts. The Cato Institute’s major donor took himself out of contention for health reasons and, given how the wars were executed, it’s hard not to wonder what might have been under a war hero’s leadership. Throughout Bush, one sees Bush’s potential as president (I did when I met and interviewed then-Governor Bush in downtown Los Angeles).

This only underscores Bush’s severe deficiencies, which caused the United States to wage neverending war, lockdown and surveillance and welfare statism. The result, depression, despair and the threat of total economic collapse, made possible the historic election of his successor, Barack Obama. Author Smith doesn’t draw these conclusions, however, supporting facts for these assertions are laid out in page after page, chapter after chapter—”Inauguration”, “March of the Hegelians”, “Katrina”, “AIDS”, “Asleep at the Switch” and, the most understated title, “Quagmire of the Vanities”—and note after note. Despite the author’s warped perspective, with his anti-capitalist expressions of admiration for some of the president’s most damaging enactments, such as the monstrous controls on education known as “No Child Left Behind” and government drug subsidies for the wealthiest generation of old people in history, evidence that Bush’s was one of America’s worst presidencies is abundantly and thoroughly presented.

The first U.S. president to impose an office of “faith-based initiatives” in the White House, for instance, had warned Americans in his inaugural speech that, in opposition to the founding ideals of the republic:  “Church and charity, synagogue and mosque, lend our communities their humanity, and they will have an honored (!) place in our plans and in our laws.” (Exclamation added).  Author Smith demonstrates that teetotaler Bush practices what he preaches, beginning every cabinet meeting with a prayer—”not a silent prayer, but a direct appeal for divine guidance” and all but sidelining funding for stem cell research on faith, abetted by a conservative philosophy professor at University of Chicago.

Regurgitating another philosopher’s dubious ideas, Smith quotes Bush’s guru Karl Rove as proclaiming that “we create our own reality..and you, all of you, will be left to just study what we do.” With Bush sincerely believing that he was the instrument of a supernatural being, he was surrounding himself with a band of obstinate intellectuals that referred to themselves as “Vulcans” for the Roman god of fire. It makes for chilling reading when you think about the thousands who would be doomed to die in fiery pits of hell on earth at the hands of religious terrorists and war policymakers from 2001, when religious fundamentalists brought the Twin Towers down, to 2009, when the economy came crashing down (and never has recovered despite Bush’s multi-trillion dollar debt schemes).

Jean Edward Smith makes mistakes, uses wrong words and lets his political philosophy distort his thinking, as when he chastises Bush neoconservatives, such as Paul Wolfowitz, for following philosopher Leo Strauss who believes in “moral absolutes” and thinks the United Nations is “inherently suspect” (it is and ought to be to anyone who takes rights seriously). But he tracks down crucial facts about the Bush presidency, career and lifetime, including that George W. Bush did not meet with his National Security Council a single time after his initial meeting in January 2001 until after the September 11 attack on America, despite numerous urgent and credible warnings of impending Islamic terrorist attack and Communist China’s seizure of a U.S. spy plane and the American crew.

In this sense, the author provides a useful account of a very recent and extremely important figure in American history. While lacking a deep and fuller judgment about George W. Bush, Jean Edward Smith sheds new light on Bush’s background, motives and political philosophy. He also sets the record straight that it was Bush, not Dick Cheney, Donald Rumsfeld, or Condoleezza Rice, who took charge of U.S. foreign policy, demonstrating the toll faith takes on the ability to make rational decisions. Smith shows how Bush did everything or almost everything wrong in response to the act of war known as 9/11. This spiraled the nation faster toward its current pre-totalitarian state. Thanks to Bush, it is easier to see so soon after he was president how Bush  endangered Americans’ lives, properties and liberties and ended, harmed and foreclosed pursuits of happiness for generations to come.

For their roles, Rumsfeld and Cheney come off as flawed but more measured and responsible than they are often portrayed by some pundits and journalists. Rice, whom Smith asserts (as I’ve suspected) willfully evaded signs of impending catastrophic assault on the United States, contrary to what she claims, and “threw fits”, does not. Other illuminating facts include President Clinton‘s attempt to visit North Korea. The author gets facts wrong, too, as when he writes that “President Reagan deserves full credit for ending the Cold War” (facts about the then-crumbling Communist Russia show otherwise). But Smith gets most of the important facts right and, which is perhaps more important, he shows that he grasps the magnitude of President’s Bush’s wrongdoing  (even as he doesn’t name it as he could and should).

On this issue, Smith observes that, at a certain point in the president’s term:

When Bush returned to Washington on Labor Day, he had spent a total of fifty-four days at his ranch since inauguration. “That’s almost a quarter of his presidency,” said the Washington Post. Throw in four days last month at his parents’ seaside estate in Kennebunkport, Maine, and 38 full or partial days at the presidential retreat at Camp David, and Bush will have spent 42 percent of his presidency at vacation spots or en route.”

Bush declared a war against terror, which Smith correctly suggests is inherently unwinnable, recited Bible verses and instructed a speechwriter that a reference to 9/11 “as an act of war” be deleted. Under Bush’s administration, CENTCOM changed the name of America’s military operation in Afghanistan after 9/11 from Infinite Justice to Enduring Freedom to appease Moslem sensibilities, the NSA justified mass, indiscriminate spying on Americans in what one scholar calls “a defining moment in the constitutional history of the United States” and the Marines were ordered to “cut and run” at Fallujah in Iraq just when they needed to use unyielding force against the enemy.

George W. Bush gets his due as a man with a kind of American decency, too, especially when viewed here in the context of the Bush family, particularly in a story about a chandelier in which Bush spares a childhood playmate from his mother’s wrath. But Smith outlines and explains in Bush how Bush ruined America for Americans with wars of altruism, the morality Bush essentially adopted from his father’s and grandfather’s noblesse oblige and mangled with Americanism, which caused intellectuals such as Smith, whose biographies of Ulysses Grant, Franklin Roosevelt and Dwight Eisenhower have earned acclaim, to mistake Bush for an advocate of moral absolutism.

This fraudulence is exactly why Bush was a bad president, one of the worst. Smith gets this judgment off to a serious and scholarly start, whatever Bush‘s imperfections, and he does it with clarity in the narrative, the facts and the contexts. What he gets wrong, he gets wrong, such as his penultimate chapter’s last line that “[i]deology was replaced by [Bush’s] pragmatism.” The author’s frequently purposeful account of the facts of Bush’s life and times proves otherwise; pragmatism, mixed as it is by Bush with faith at a moment in U.S. history that called for the clear, sober and ruthless use of reason, is George W. Bush’s philosophy. Jean Edward Smith’s disturbing yet important Bush, with its barrage of tales, facts and names showing that America’s government is contaminated with favoritism, nepotism and small, blank and corrupt minds, makes the case that Washington is led by petty little believers and illustrates why time for argument and action based on reason is running out.

George H. W. Bush at the End of Iraq