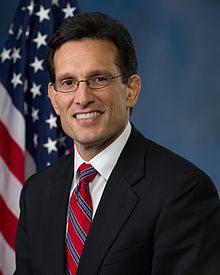 Republican Eric Cantor has served Virginia’s 7th Congressional district since the turn of the century. Today, in a stern rejection of Cantor’s moderate views, voters of his own party chose to terminate his service. It’s the American way. But the historic defeat – Cantor is the first House Majority Leader to lose his party’s primary – represents a fundamental repudiation of the status quo, left and right, Republican and Democrat.

The GOP challenger, an economics professor who claims to have been influenced by Ayn Rand but quoted the Bible in his victory speech, Dave Brat, co-wrote a paper titled “An Analysis of the Moral Foundations in Ayn Rand.” Whether devout Catholic Brat takes Rand’s Objectivism seriously or not (remember when Objectivsts were excited that Paul Ryan had praised Rand?) what matters most is that Brat beat Cantor based on his assertion that Cantor was a moderate and, in this assertion, he is right on. Cantor is soft on Big Government at almost every pivotal and procedural turn as President Obama dismantles the law and destroys the nation, from ObamaCare to compromise with the White House over immigration. Brat (read more about him here) didn’t convince voters that he deserved to win as much as persuade them that Cantor deserved to lose. As CNN’s John King observed, it’s not just that Tea Party types trounced Congressman Cantor, who is as oily as Clinton and Gingrich; a key part of the defeat is caused by Cantor’s usual rank and file conservatives not showing up to vote. The status quo defenders – the knee-jerk Bush sycophants that wink, nudge and sidewind about opposing ObamaCare while muttering in mock confidentiality that no one can really expect to repeal ObamaCare – gave up the fight, stayed home and lost. This indicates a weakening of the entrenched welfare state mentality that feeds the Washington beast.

It is crucial to understand this aspect of Brat’s victory; that the win is less a galvanizing of support for Dave Brat for Congress than it is an exhausted abandonment by Republicans of fraudulent figures like Cantor pretending to be opposed to Big Government. As John Cassidy writes in the New Yorker, Brat “kept hacking away on the immigration issue, saying, “A vote for Eric Cantor is a vote for open borders. A vote for Eric Cantor is a vote for amnesty.” This is true, too, and what is obvious to anyone watching Cantor, who with his fake smile embodies the worst of Washington politicians, was made explicit by voters in his district, who could no longer ignore or evade Cantor’s complicity in aiding Obama. Brat may be an honest, conservative Catholic who once sought to understand Ayn Rand’s ethics of egoism, and now he will be up against another college professor from the same faculty and voters may get an intellectual contest between a Christian professor whose program was funded by the head of the Cato Institute and a sociologist Democrat.

In the victory speech, Brat quoted the Bible and exclaimed that: “This is a miracle from God!” Lest apologists interpret this as an aberrant outburst, he later told Sean Hannity on Fox News that he is “humbled that God gave us this win.” On his Web site, Brat describes himself as “a man of deep faith” and it will be easy to challenge a professed advocate of capitalism on religious grounds because pure capitalism is based on an egoistic, not altruistic, premise. But, unlike Cantor and the Washington establishment, Brat opposes the NSA’s indiscriminate mass surveillance and he made a point to differentiate himself from Cantor on this issue. Unlike Cantor, Brat vows to repeal ObamaCare.

Dave Brat, like most Americans, holds mixed premises. Whether Brat thinks he is a vessel of God, and the anti-abortion conservative wrongly claims that “[o]ur fundamental rights … come from God, the Author of Nature”, there is no denying that Cantor’s defeat is a blow to Big Government’s establishment. Thus, today’s electoral end of the House Majority Leader is a victory for America. It may be too late to save the nation. It may be too soon for an American renewal of our founding principles. But Eric Cantor was an obstacle to liberating Americans from what’s becoming a totalitarian state and that makes his decisive defeat a timely and welcome result.