OCON Cleveland, like OCON Pittsburgh and OCON Chicago, makes the most of its centrality of venue and location. I think today’s audiences are art-deprived, as I’ve written. So this year’s arts theme, pegged to the anniversary of a collection of Ayn Rand’s arts and literature essays, undoubtedly helps.

The best aspect of the conference is its venue, the Hilton Cleveland Downtown, which was built for the 2016 Republican National Convention (read my review here). Overall, the sponsoring Ayn Rand Institute’s best conferences in terms of the whole experience are the ones held in mid-American cities. OCON Cleveland squandered the opportunity to capitalize on the history of the location, unfortunately. There were no lectures on John D. Rockefeller and Standard Oil, for instance, or other obvious Objectivism tie-ins. Tours of Cleveland are another missed opportunity. 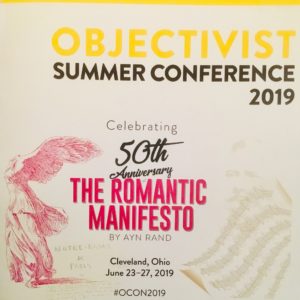 OCON increasingly tends to be oriented to a lighter, less intellectual and educational and more social experience, so this is not surprising. Gone are the deep dive courses of yesteryear, when I could delve into details, nuances and aspects of my favorite artists such as Hitchcock, Hugo and Hawks. In Chicago, I studied Aristotle with an Aristotelian scholar for several sessions. In Cleveland, the same scholar was reduced to a single session.

I’ve heard it said that “young people” are to blame. I don’t accept it. Certainly, I think it’s true that the incessant and ubiquitous technology glut often depletes or mitigates one’s ability to focus. But offering less is a self-fulfilling prophecy. OCON ought to offer deeper, longer and more serious studies with streamlined teaching. Not in fragments that often turn into advertisements for whatever the speaker’s selling. There were too many ads, or plugs disguised as something other than ads, for my money at this year’s OCON. Let the trader principle play out and have an Austen Heller room in which to showcase, mix and trade. Also, the full schedule ought to be announced and advertised in advance, not doled out in spurts as if prospective customers are inclined to act on a whim.

Here are other criticisms: no greeting, let alone orientation, at conference registration — an announcement of the death of a prominent Objectivist intellectual mentioned as an aside (which turned out to be false and was retracted without apology) — and the worst part: an intellectual who’d denounced Leonard Peikoff was admitted and is sanctioned by the ARI, which is unfortunate.

Visiting and making new friends is a top value. I gained the highest value at OCON Cleveland in the lessons on bacteriophages (with a nod to Arrowsmith by Sinclair Lewis), PrEP, the scourge of mosquitos, CAR-T, Rachel Carson and CRISPR by the brilliant if breathless Dr. Amesh Adalja — behaviorism and Ivan Pavlov — Christianity’s dubious origins — interesting advice with cogent thoughts on Bob Dylan and criticism of being “inquisitorial” within the context of what the speaker calls personal, as against optional, values — and a lecture on Aristotle with insight into Rand’s thoughts on his philosophy of art.

Though I was unable to attend several major lectures and courses, I enjoyed Shoshana Milgram’s newest work on the splendor of Victor Hugo and I would’ve liked to have seen Dr. Milgram, an English literature professor and Rand’s biographer, on the arts panels. My personal favorite presentation was Stephen Siek’s marvelous, two-part lecture about and biographical introduction to Sergei Rachmaninoff, whose struggle, work and life are as larger than life, passionate and inspiring as his music. This type of mini-course makes OCON uniquely enriching. OCON ought to let those who attend be greedy for more.