The new year started with a turn of foreign events, as I wrote last week. Capitalism Magazine’s editor and publisher, without whom this blog, site and many articles would not be possible, asked to reprint it. Read my commentary on the day America’s impeached president of the United States ordered a pre-emptive and proper retaliation against Islamic Iran, the first serious strike against this enemy of Western civilization, here. 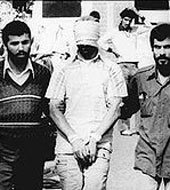 Since the strike that killed a general for Iran’s army of Islamic terrorist proxy gangs and regimented soldiers of Allah, Iran has attacked America and a Ukrainian passenger jet carrying 176 innocents with missiles. The American president pledged this morning that, while showing restraint by declining to hit back for the moment, he will prevent the state sponsor of terrorism from acquiring nuclear weapons. When his predecessor brokered a deal with Iran that returned billions of dollars which were withheld after Iran attacked America and seized our embassy, capturing 66 Americans as prisoners of war in Iran’s jihad (“holy war”) against the West, I called it Obama’s death pact. Horrifically, for the Americans and others, including 63 Canadians on board the Boeing 737 Iran shot down in Teheran, death or its imminent threat became real thanks to Obama’s Iran deal. Barack Obama continued U.S. selflessness in foreign policy which, for decades, appeased Iran.

May appeasement end with military defense ordered and enacted by President Trump.

Thirty-five years after it debuted in theaters, I watched a notorious movie by director Francis Ford Coppola (The Godfather, Apocalypse Now, One from the Heart). Read my new review of a restored version of Mr. Coppola’s 1984 motion picture, The Cotton Club, now available on Blu-ray, DVD and streaming for its 35th anniversary, here.

Though I never saw the original in either theatrical or home video release, I was not disappointed in The Cotton Club (encore edition). It isn’t perfect, as I write in the review. But its jazz and tap dance scenes offer rare and exquisite entertainment. 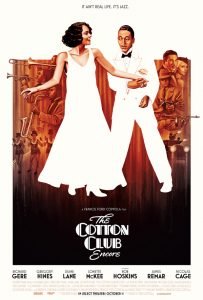 The Harlem-themed epic has an unusual history. This is Mr. Coppola’s first movie after a self-financed 1982 musical, One from the Heart, lost money. The Cotton Club was made and financed by a range of contentious principals, such as the late producer Robert Evans, and others, such as Orion Pictures, now owned by MGM, which Lionsgate purchased, acquiring its library years ago.

“This is the movie I meant you to see”, Mr. Coppola, referring to the additional 20 minutes, tells a New York audience in the Q&A feature in the bonus segments. The panel includes disclosures about lawsuits, attempts to steal the negative and a murder trial surrounding The Cotton Club, which debuted in the fall of 1984. Francis Ford Coppola also remembers reading and being influenced by Arthur C. Clarke’s science fiction novel, Childhood’s End, with a black character and Maurice Hines recalling his late brother, Gregory, and their grandmother being an original Cotton Club showgirl. 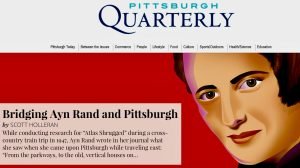 Finally, my editor informed me this morning that my article about Pittsburgh and its connection to Ayn Rand (1905-1982) for the winter edition of the print publication Pittsburgh Quarterly, is featured on the online version’s cover. Read about Rand, who revered the Industrial Revolution, and the city of bridges, steel and progress, here.