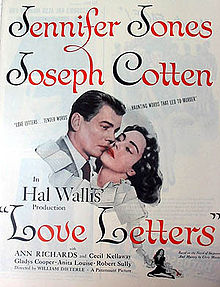 This 1945 motion picture, based on a novel and written and adapted for the screen by Ayn Rand, delivers lush romanticism in a movie with an implausible premise which nevertheless features excellent photography, writing and performances and exists as evidence of Ayn Rand’s ability to be objective as a writer.

Objectivity is not a small issue in a film based on a wacky novel, as Objectivist filmmaker Michael Paxton recently convinced an audience during a screening at OCON, about a woman with amnesia who struggles to find herself. Few writers are as soulful and poetic as Rand in writing about the epic quest to define, direct and make – and remake – oneself and Love Letters, co-starring Joseph Cotten and Jennifer Jones, is exceptional in this regard. The woman who would adapt the screenplay for her 1943 novel The Fountainhead four years later – an atheist who would describe herself as a radical for capitalism – works in a good bishop, gold as money and the Bible in a remarkable and curiously involving love story of a man and a woman whose love grows in letters during wartime.

When I first saw Love Letters in the 1990s, it did not strike me as Rand’s best work of art and having seen it again recently I still hold that view, though I appreciate it more than I did and see more clearly that it’s not her fault and the movie is a valiant effort. Shot in black and white, with a score that evokes for me the insistent score for the pirate film version of Rand’s first novel We the Living, Love Letters begins with a tale of two soldiers during World War 2. One (Cotten) writes the other’s love letters to a beautiful woman (Jones) with whom he predictably falls in love as she writes back. That’s the whole plot premise, really, and it’s wispy and predictable.

But it looks gorgeous, moves with grace and is accentuated by romantic music and Rand’s clipped, economical eloquence adds depth of meaning to what otherwise might have been a soggy, Forties melodrama. It turns out that the other soldier had returned from war to marry the young beauty only to end up murdered and the bride’s memory loss, presumably triggered by the trauma, makes her encounters with the man with whom she really fell in love both bittersweet and utterly impossible.

Of course, in fantasy, nothing is impossible so, here, too, gold sovereigns, a cat and a car going backwards fold neatly into what amounts to an irresistible plot-theme, as Ayn Rand coined the term, that no matter how young and reckless you can’t find happiness in another person and a real lover holds a mirror to your own ego and the best within, though Love Letters doesn’t frame it that way. But that’s what happens, in an English countryside with kind, decent people, malicious types and a scruffy dog, too, all observing or obstructing a man and a woman in love who don’t have access to all the relevant facts.

That fact and value are integrated in a picture story that feels at once light, deep and serious is an achievement made chiefly by Ayn Rand, who would go on to write the 20th century’s greatest novel, Atlas Shrugged, which introduced the world to her philosophy, Objectivism.

Love Letters is directed by William Dieterle. Costumes by Edith Head. From a novel by Chris Massie. Lee Garmes is director of photography. Score by Victor Young. Hal B. Wallis is producer.