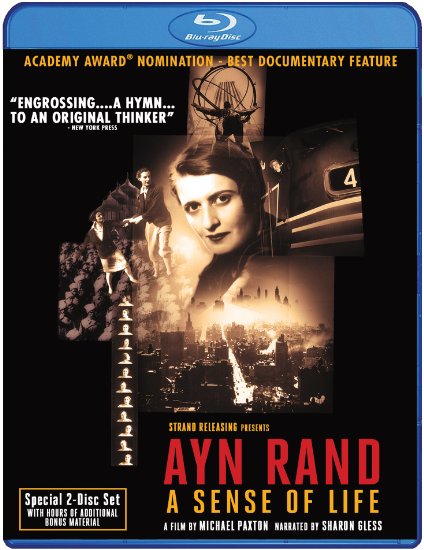 Strand Releasing’s 1997 documentary Ayn Rand: A Sense of Life, is, in retrospect, a cinematic achievement. The 143-minute movie debuts on Blu-Ray on July 28.

Other than a new trailer and enhanced English SHD sound, this is the same product as the Collector’s DVD edition several years ago. But Objectivists, Ayn Rand fans and those who recognize the power and relevance of her novels We the Living (1936), Anthem (1938), The Fountainhead (1943) and, in particular, her magnum opus, Atlas Shrugged (1957), and her books and other writings, should invest in owning this film if they don’t already have it.

Given the historic events since writer and director Michael Paxton‘s Oscar-nominated movie was released in movie theaters, the reasons to see it have multiplied.

In silent movie clips, letters, pictures, drawings, paintings, interviews, dramatization and animation, Paxton pieces together the ideas, stories and events in Rand’s life in chronological order. This approach allows the viewer to discover, rediscover and appreciate her life, career and philosophy. It is factual, thoughtful and respectful, even reverential, without being overloaded, dense or dogmatic. Ayn Rand: A Sense of Life depicts Ayn Rand (1905-1982) as the heroic figure she was.

Backed by documentary evidence, from her original name on a ship’s passenger manifest during her escape from Soviet Russia to highlighted stills with Rand as an extra on Cecil B. DeMille’s The King of Kings, Paxton presents Ayn Rand’s life in terms of essentials. For example, he integrates a movie diary entry and early clip of the silent film era’s Gish sisters with their later intersection in Ayn Rand’s life. This theme of realizing heroic ideals and goals recurs throughout the faded photograph-styled motion picture, with movie stars such as Greta Garbo and Gary Cooper. Aided by actress Sharon Gless (Burn Notice), who narrates the film with grace, and Jeff Britting’s correspondingly ascendant score, segmented snippets, scenes and stories converge as a whole picture. Among those interviewed are Objectivist intellectuals who knew Rand, including her heir and Ayn Rand Institute founder Leonard Peikoff (for full disclosure, I am an Objectivist and I’ve met and studied, worked or become friends with some of those involved or who appear, including Paxton and Peikoff). The late CBS News journalist Mike Wallace is also interviewed.

Accordingly, one gets a strong sense of a personal life, including the affair with psychologist Nathaniel Branden, which is telescoped here for practical purposes, and her friends, associates and preferences. Ayn Rand’s husband, Frank O’Connor, is a steady yet elusive figure.

But the focus is on her intellectual development as a philosopher and progression as a writer, from childhood and studies in St. Petersburg and witnessing the Bolshevik Revolution in Russia to her brief time in Berlin, on the trans-Atlantic voyage to New York City, months in Chicago, Hollywood years and on lecture tour. Finally, Ayn Rand triumphs in New York City, where she creates Objectivism and writes Atlas Shrugged. The movie deposits each part of her life into the big picture. Of course, it is larger than life.

Asked to write a screenplay for DeMille called “The Skyscraper”, selling an adaptation of her story Red Pawn, seeing her play, Penthouse Legend, morphed into something else, one sees the challenge, effort and struggle of the young writer Ayn Rand. The initial allure of a screen version of her anti-dictatorship novel We the Living, which was published in Hollywood’s Red Decade, draws attention from Bette Davis, who apparently indicated that she wanted to portray the heroine, Kira, until she was advised that doing so might hurt her career. A pirate film version was made in fascist Italy (the best movie based on an Ayn Rand novel; read my review here) in 1942. A Sense of Life recalls Ayn Rand meeting the only actress to portray Kira on screen, Alida Valli, who tried to persuade David O. Selznick (Gone With the Wind) to make We the Living in Hollywood.

The nation’s decline permeates the film. Ayn Rand begins life as an eager newcomer, distressed to have missed a sight of the Statue of Liberty while entering New York, where her life ends after it seems as if almost everyone in America missed the point of her novels and philosophy. Part of what makes A Sense of Life an accomplishment is its objectivity with regard to her legacy. Ayn Rand’s answers, estimates and explanations, presented in quotations, papers and audio-visual excerpts, speak volumes.

“If anyone destroys this country,” Ayn Rand says at one point in a late night interview with Tom Snyder on NBC in the 1970s, “it will be the conservatives. Because they’re all altruists.”

Whether appearing on the Today Show, the Tonight Show with Johnny Carson or Snyder’s Tomorrow Show, Ayn Rand was extremely clear and concise. Those familiar with her books will find much to think about. Even those who are agnostic or hostile to her philosophy may gain from seeing her in action through archival material. Those who are new to Ayn Rand will learn about the philosophy in a general, not pedantic, sense. Each viewer will learn more about what moved her to create a system of thought so radical, controversial and enduring. Everyone watching the movie can judge Ayn Rand as she thought, wrote and lived.

This includes her relationship with her husband, whom she apparently adored, and her professional connections with those who advocated for the publication and adaptation of her books, including Warner Bros.’ advocate for making The Fountainhead, Barbara Stanwyck, and Ayn Rand’s family. Whether in a movie clip of Ayn Rand at her Richard Neutra-designed home in Los Angeles’ San Fernando Valley or footage of her congressional testimony against Communist infiltration of Hollywood studios, Paxton ranges over the sweep of her private and professional life.

However, this is earned in steps, not lobbed as a propaganda piece (such as 2012’s Ayn Rand and the Prophecy of Altas Shrugged), and Ayn Rand: A Sense of Life is gentle, not overbearing.

There is an emphasis on Hollywood, which deals in pictures, and the film regards her foremost as an artist who is a philosopher, not the reverse. Pictures evolve into its progression and vice versa: Ayn Rand meets legendary movie producer Hal Wallis (Casablanca), for whom she wrote Love Letters with Jennifer Jones and You Came Along with Lizabeth Scott, writes Anthem, campaigns for Wendell Willkie’s 1940 presidential candidacy, is deemed “too harsh” by Hollywood conservatives and suggests Garbo, with whom The Fountainhead director King Vidor subsequently met, to portray Dominique Francon on screen (which did not happen; the part went to Patricia Neal).

That’s merely when she was young. If Ayn Rand’s life is like something out of Ayn Rand’s fiction—meeting DeMille on the movie studio lot, meeting her future husband by chance in a Hollywood library, being invited to dine at Taliesin with Frank Lloyd Wright—it is because she chose to pursue happiness. As she might have put it, she wanted to be selfish.

Ayn Rand’s selfishness, the highest Objectivist virtue by this admiring account, was consciously practiced. Again and again, with New York City as the pinnacle of man’s achievement and the Empire State Building as a visual focal point, unfolding from an artist’s portrait of Ayn Rand to the crowning achievement which is Atlas Shrugged, the woman at the center of A Sense of Life lived by the exalted ideals she identified, explained and dramatized. She visited steel mills in California, Chicago and Johnstown, Pennsylvania, and rode on trains and studied architecture as research for her work. She gave herself a renewed sense of purpose in adapting Atlas Shrugged as an NBC miniseries after her husband died in November of 1979, when it became abundantly evident that America was falling apart.

As her career winds down and Ayn Rand is seen seated at an intellectuals’ round table surrounded by men, she had been invited to the Apollo 11 rocket launch putting man on the moon, an event which she attended, denounced racism—appropriately, a sign held by a somber-looking black woman reads “Integration”—and attended an invitation-only dinner at the White House with President Gerald R. Ford and the First Lady, Mrs. Betty Ford.

Before social media, proving that she grasped what most did not about objective communication, Ayn Rand had created courses, conferences, lectures, discussions and publications emanating her philosophy, Objectivism, and disseminating her ideas across multiple media platforms, from radio and television (Today, Tonight, Tomorrow) and theater and movies to an interview in Playboy and other print media. She even wrote a column for the stagnant Los Angeles Times. It’s all here. The evidence of her genius but also her strength is plain; she never lets up, she does not stop acting to advance her values, she never lets what matters go.

Ayn Rand: A Sense of Life positions TV’s talk show pioneer Phil Donahue as a proxy for the general public with regard to understanding Ayn Rand and Objectivism. In her two Donahue appearances, one sees his evolution as a host, as the powerful pair discuss God, altruism and the death of her husband. Relentlessly clarifying confusions, Ayn Rand acts as a springboard to an entire examination of one’s deeply held premises.

This is the effect of the film. I have seen it several times since I attended advance screenings and the premier in 1997. Whether on a home theater screen or a movie theater screen, Ayn Rand: A Sense of Life plays like the absorbing, accessible and enlightening movie it is. It prompts the viewer to think—about her comments, ideas and books and her stories, heroes and themes—about whether and how these apply to one’s life. The film is a solid cinematic introduction to and retrospective of Ayn Rand, Objectivism and her books.

In it, one also learns the early history and first stage of a movement made by her philosophy. It’s not flawless—occasionally, musical cues are distracting and Anthem gets short shrift—and moviemakers should continue to explore her life. But, unlike her detractors’ psychologizing, almost everything asserted here derives from the facts of reality or conclusions based on the firsthand observation of its fascinating subject, Ayn Rand.

If you’re up to it, to paraphrase Objectivism’s creator, check those premises; Ayn Rand: A Sense of Life is a good place to start.

As I wrote, this is the same two-disc edition as the earlier release, a DVD Collector’s edition, with a couple of additions and enhancements other than the film’s transfer to the crisp, higher-definition Blu-Ray format. Chapter selections are clearly marked.

The extras include a new trailer, which was not on the DVD, a rare photograph gallery, a deleted dance sequence evoking Ayn Rand’s unpublished work in progress “To Lorne Dieterling”, the complete filmed version of scenes from Ayn Rand’s play, Ideal, and more. Cast and crew bios, an interview with writer and director Michael Paxton, (whom I interviewed for the movie’s release; read the archived newspaper article here), stills, bonus footage and additional information are all included. Fans and Objectivists should not skip the additional interviews with Ayn Rand’s friends, scholars and associates, including Harry Binswanger and Leonard Peikoff, as they have more to say about her than is contained in the 143-minute movie.

In a July 2015 statement accompanying press materials, director Michael Paxton says that “telling stories about independent and heroic women have always been and continue to be a theme in my work as a filmmaker.” He should be proud that Ayn Rand: A Sense of Life, which continues to earn interest in the themes, books and philosophy of Ayn Rand, is a heroic story well shown and told.