Ayn Rand was asked to adapt her first novel, We the Living, which was published 78 years ago this week and has sold 3 million copies since, for the theatre and I recently learned that two never-before published versions of her stage play will be published this fall. 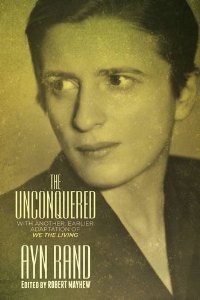 According to Amazon’s book page for The Unconquered: With Another, Earlier Adaptation of We the Living, the hardcover volume by Rand will feature “the first and last versions (the latter entitled The Unconquered)…[w]ith a preface that places the work in its historical and political context, an essay on the history of the theatrical adaptation … and two alternative endings…” The new work is edited by philosophy professor Robert Mayhew, whom I interviewed five years ago about the novel. He also teaches at OCON. 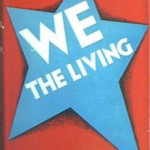 We the Living is a bitter tale of a triangle in Soviet Russia and an epic story of ideas, love and life. The 1936 novel, which I wrote about for an article distributed by Scripps Howard and again in a review of the movie adaptation, is haunting, unforgettable and helpful to living everyday life.