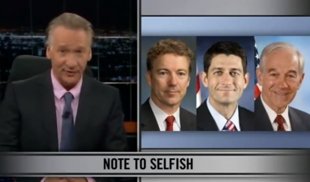 Comedian Bill Maher recently railed against Ayn Rand in his repudiation of libertarianism in an amusing if ignorant display (watch it here) that underscores that the woman who created Objectivism is right to reject libertarianism.

Maher has been a left-wing libertarian and his renunciation, which is putting his comments kindly, is both a full hard turn to the left (i.e., environmentalism and welfare-statism) and a drop of any pretense that Maher takes ideas seriously, as anyone who has seen his biting shows figured out long ago. He’s a clever comedian with a vague, passing interest in ideas – he once booked Ayn Rand’s heir on his show – who has finally put himself in his place as a lazy shill for what amounts to dictatorship.

But part of what makes the cynic’s diatribe humorous is that he’s right to suggest that libertarians are inconsistent and to imply that the nation’s top libertarians, such as Senator Rand Paul and Congressman Paul Ryan, are unserious about advancing liberty and more interested in just being self-centered. Libertarians are anti-government, not anti-government control, and they fail to articulate a coherent position on anything relevant to people’s lives because they stand for nothing. Both Sen. Paul and Rep. Ryan graft Ayn Rand’s consistently rational philosophy – which is not anti-government, contrary to Maher’s monologue – onto their Judeo-Christian politics of theocracy. What results is a confusing presentation of fragments of good ideas mixed with bad ideas that remind us that libertarians, such as the Cato Institute, Rand Paul and Paul Ryan, are at best misguided in attempts to advance liberty and capitalism and at worst they propagate the ethics of the totalitarian welfare state.

If Objectivists infiltrate what is more of a loose political movement made by scuzzy hippies than a political philosophy that makes sense and have some degree of influence for restoring individual rights, I say way to go and have at it. But I think it’s a waste of time and I think we’re better off just being Objectivists – selfish, honest, proud, productive and rational – and trying to persuade people who think. Having a biting, leftist libertarian comedian ditch libertarianism for leftism while denouncing Ayn Rand on the wrong grounds may be marginally interesting, but it is not a sign of progress and I doubt that differentiating libertarianism from Objectivism will move the culture toward reason.