An Objectivist in Pittsburgh

Watching Boom Supersonic founder and CEO Blake Scholl address this summer’s Objectivist Conference in Pittsburgh, I was struck by the newness, youth and growth of the movement to advance Ayn Rand’s philosophy, Objectivism. Blake is a friend whom I’ve known since he was a student at Pittsburgh’s distinguished university named for two great American capitalists — Andrew Mellon and Andrew Carnegie — at the end of the 20th century. Today, Blake’s a leading new voice for capitalism, seeking to reclaim and restore supersonic air travel.

As the only philosophy to advocate capitalism on the ethics of egoism, which Ayn Rand (1905-1982) reduced to what she boldly and, I think, rightly called the virtue of selfishness, Objectivism is perfect for attracting, inspiring and guiding productive achievers such as Blake Scholl, who departed after his talk in Pittsburgh to Paris, where he tripled orders for Boom Supersonic’s new jet (its XB-1 Supersonic Demonstrator is scheduled to fly at Edwards Air Force Base in Southern California in 2019). The system of ideas created by the author of Atlas Shrugged is bound to foster businessmen such as Blake Scholl, who presented his vision for aviation based on speed, convenience and quality before what the Ayn Rand Institute claims is its largest annual Objectivist Conference. 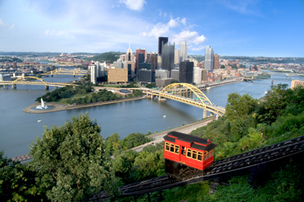 The city of steel, bridges and exemplary education, Pittsburgh, too, is the perfect place to exhibit an enticing preview of the manmade. Pittsburgh was at the crux of creating the world’s single, greatest period of productive achievement, the Industrial Revolution. This magnificent city, where pioneering soldiers, frontiersmen, industrialists, doctors and artists protected and forged the nation’s most enduring new enterprises — in medicine, engineering, energy, movies, television and the arts — continues to be underestimated. Just like America, Ayn Rand and the best minds.

Certainly, Boom’s Blake Scholl is not infallible; he may make mistakes in executing his vision. However, with Blake’s presentation, the Objectivist movement reaches a higher point — fittingly, in a tower located next to railroad tracks at the south bank of the Monongahela River in a proudly industrialized metropolis which climaxes at a golden triangle pointing West, stretching into lush, green hills. This year’s OCON included lectures on intellectual property, stoicism and the gold standard. Ayn Rand biographer Shoshana Milgram delivered insightful talks on Rand’s interviews with industrialists and an examination of Rand’s favorite novel, which is about building a grain elevator. There was a screening and discussion of the Oscar-nominated documentary Ayn Rand: A Sense of Life, trivia and talent events and a panel discussion on free speech with Flemming Rose, a journalist who once published a Mohammed cartoon and still needs police protection. Pittsburgh doctor Amesh Adalja spoke on the history of infectious disease in the city where his heroes, Drs. Thomas Starzl and Jonas Salk, made medical history. OCON Pittsburgh — during which the Pittsburgh Penguins won hockey’s Stanley Cup and I visited family and friends and saw the Pittsburgh Pirates defeat the Colorado Rockies at PNC Park — included tours of the Homestead blast furnace once owned by Andrew Carnegie‘s U.S. Steel, Henry Clay Frick’s (1849-1919) home and owned works of art and Fallingwater, the home Frank Lloyd Wright designed for Pittsburgh department store owner Edgar Kaufmann in 1936. I was writing TV scripts on deadline during the conference and missed some talks, events and mixers. And, while certain conference services, staff and events failed, fell flat or need improvement, others were good, new or interesting.

Blake Scholl’s talk stands out as an Objectivist hallmark. That this Carnegie Mellon University graduate stood as a businessman against the cynicism and anti-intellectualism of our times to demonstrate that the good is possible and that air transportation can and ought to be grand, fast and glorious realizes Ayn Rand’s depiction of man as a heroic being. That he did it in Pittsburgh is perfectly rational. So, here comes evidence that the potential for the gleaming, industrialized future Ayn Rand’s idealistic novels envision, promise and dramatize can be made real. Whatever happens on the day after tomorrow, to paraphrase a condensed description of Atlas Shrugged — a novel, it must be recognized, which also depicts a dramatic episode of aviation adventure — this is true, which is cause for all thinkers to want more of what Objectivism explains and offers for living here on earth.