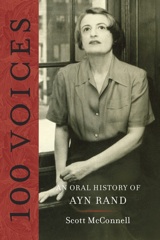 From 1996 to 2003, Scott McConnell conducted a series of interviews with dozens of people who met, worked for or with, and/or knew Ayn Rand (1905-1982). The new trade paperback, 100 Voices: An Oral History of Ayn Rand is the result. This long-anticipated volume, a project of the Ayn Rand Archives (full disclosure: several of my friends, colleagues, and acquaintances including McConnell are among the participants), is an important addition for anyone interested in Rand, author of Atlas Shrugged and creator of Objectivism.

100 Voices is an ambitious work about a literary and philosophical genius but it is a collection of interviews about Rand and the content should not be taken as fact or biography. Here, we read that Rand sided with Gen. Douglas MacArthur over President Harry Truman, thought Walt Disney’s animated features were too cute, met Senator Joseph McCarthy, found something to like about former Treasury Secretary William E. Simon, visited the Playboy Club, and entertained Barbara Stanwyck and Clark Gable at her home. There is more, both from those who did not like her and (mostly) those who admire her. The 600-page-plus edition covers her early Hollywood years through her last days in New York City, when she apparently considered going back to Hollywood to finish a script for Atlas Shrugged. Drawbacks include overly scripted questions and an occasional dead-end interview. The interviews were conducted by Archives researcher McConnell, now a documentary filmmaker, with everyone from Rand’s dentist to Fountainhead co-star Patricia Neal. Most exchanges occurred via telephone and it shows in the transcripts, which come off rather clipped, with short, general questions, what seem like heavily edited answers, and not a lot of conversational back-and-forth. For example, Miss Neal, interviewed in 1997, answers “[s]he was very friendly” when asked what Ayn Rand was like and that particular interview is less than four pages. McConnell notes that each person interviewed (or an heir) approved of each interview. I came across minor errors and inconsistencies, which McConnell acknowledges in advance in the preface. Rand fans may already be familiar with much of this material.

There are multiple rewards, including the stories of the Florida family that hosted Miss Rand during her attendance of the historic Apollo 11 rocket launch at Cape Canaveral in 1969, and ordinary, middle class Americans seem to have the most consistently fond and insightful memories of Ayn Rand. These are personal and business recollections of Rand at work, at play and, occasionally, in crisis, at various stages of her extraordinary career, so there are tales about everything from her visits to the doctor’s office to her visit to West Point, and that alone makes this book worth reading. 100 Voices is an unprecedented collection of never-before-published interviews with those who knew the 20th century’s most challenging thinker including her friends, family, and associates, actress Raquel Welch, architecture photographer Julius Shulman, writer Mickey Spillane, actor Robert Stack, former Australian Prime Minister Malcolm Fraser, and the late financial journalist Louis Rukeyser, who interviewed Ayn Rand for his television program months before she died. These 100 voices talk about Ayn Rand’s thoughts and actions on everything from her cats to psycho-epistemology and Immanuel Kant and their answers, comments, and claims make one want to delve deeper into her novels, short stories, plays, lectures, and ideas.