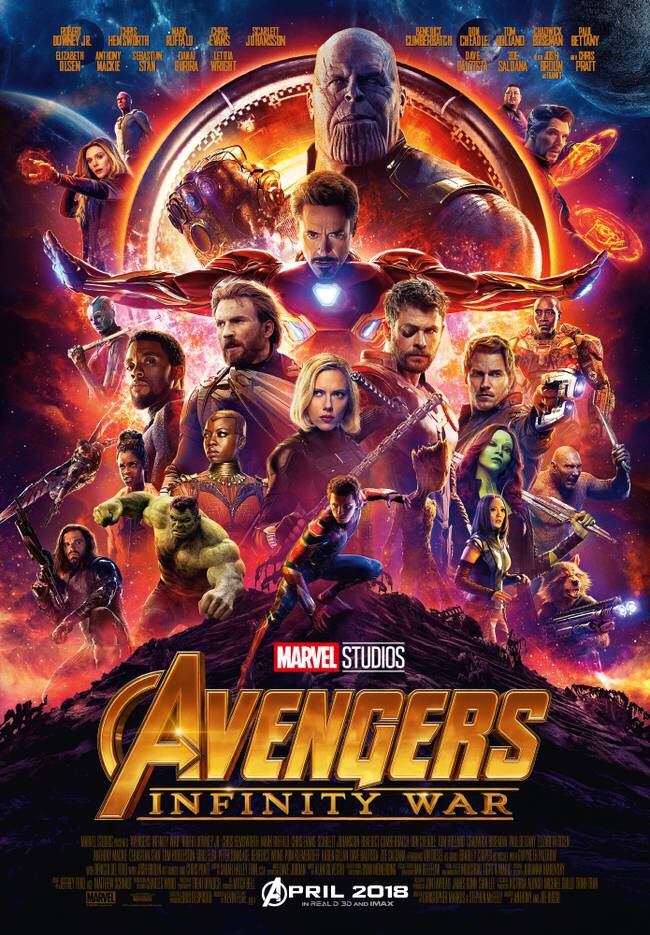 The new mega-movie in the Avengers series, Avengers: Infinity War, based on the Marvel Comics books, is more of the same. Sufficiently energetic and loaded with dozens of characters, inside jokes and various tie-ins to other movies, franchises and cultural references, it’s less like a self-contained movie than an extended episode packed with ads. There is a conflict, but with the joking and random digs, plugs and winks, it doesn’t register.

The story’s set in motion with the usual self-awareness. Each major Avenger’s here, in familiar form, with additional side characters, such as Gwyneth Paltrow’s Pepper Potts, who I’d all but forgotten about, and the whole bunch from Guardians of the Galaxy, too. They merge, banter and bond, as team evil gathers.

“You may think this is suffering”, one of the villains warns well into the first act. I admit, not being a fan of these Avengers movies, and, after Black Panther, less a fan of Marvel movies in general, my thought was “well, yes, I do, and it’s only 15 minutes in.” An ominous score, an imperiled Thor (Chris Hemsworth, Thor: Ragnarok, Thor), his devious brother Loki (Tom Hiddleston, Kong: Skull Island, I Saw the Light), all parts return and converge. I suppose there’s skill in mashing over a dozen movies and  more characters than all the Seventies disaster movies combined.

This is mind-numbingly empty, like watching a two-part episode of The Love Boat that neatly comes together and leaves you blank but without the residual warmth and goodwill. You can clock what’s going to happen every few minutes. When it does, and it plays with more sincerity and wisecracks this time, you do feel that some value’s been added, like paying an extra $1.50 to add bacon. You might rationalize that bacon makes everything taste better. All of Avengers: Infinity War is flat with a few strips of bacon.

Josh Brolin as a computer generated character called Thanos does fine with a deep, gravelly voice but Thanos kept reminding me of Ron Perlman’s Hellboy, who had a similar size, presence and demeanor, which makes Thanos almost cuddly. The film’s brutality and mass death are mixed with banter and space melodrama, which desensitizes the audience to mass death, such as the 9/11 attack on the U.S. at New York City, which Avengers: Infinity War evokes.

Much of the movie’s well-made for an overproduced comedy with semi-animated action. Also, if you think Dr. Strange (Benedict Cumberbatch, playing every scene with perfection as always, again in a role that’s beneath his talents) calling Tony Stark/Iron Man (arch Robert Downey, Jr.) a “douchebag” and someone using a flip phone, like Adele did in her “Hello” music video, is a knee-slapper, you may laugh your ass off. Not that there aren’t jaunty performances, good effects and snappy one-liners, even when not intended as humor. I laughed when a Thanos ally announced him with “Hear me and rejoice”. However, most in the audience did not.

The plot involves Thanos essentially wanting to wear magical jewelry that, should he get the jewelry he wants, will destroy the universe. There are o-ring-shaped spaceships, cars being sliced in half and many tense, angry, silly confrontations as various avengers and guardians team up to stop them. When some one of the good guys declares that “we have to go to nowhere,” I thought this was some sort of clever play on the bad guys’ nihilism, which is played as nihilism, until I realized from a title that it’s spelled Knowhere. Only diehard fans will get the references. This playing to base, too, has become a new normal in major motion pictures. It occurred to me, though, while watching Avengers: Infinity War, that these 19 or so movies depict, amplify and magnify a random, arbitrary super power in proportion to Americans’ loss of power over our own lives.

But, ‘whatev, aiight’? Marvel exists to lull you into the docile herd mentality.

“Choose a side or die”, too, would have been a decent line had Avengers: Infinity War been about something. Thanos rails against what he calls finite resources and knowledge as a burden, and he makes his stepdaughter, who’s one of the guardians, cry (if in a really bad acting way). But even in this mid-movie subplot, one sees the resolution coming. When it’s resolved, it’s as potent as a Geico commercial.

I still could’ve sworn that the character played by Scarlett Johansson had an accent once upon a time but, here, again, it’s gone. Thor gets emotional, if not for long. He calls the street smart raccoon character ‘Rabbit’ which is fun the first two times. Anthony Mackie (Black or White) as the hawk is reduced to cliches such as “this is awkward” which is pathetic to watch of an actor of his caliber. Wakandans enter, predictably, for the sake of Wakanda, not showing much enthusiasm for saving the universe, though, to be fair, it’s not at all clear that anyone clued them in on what’s at stake. This time, Black Panther‘s sister, who I gather is supposed to be the smartest person in the world, doesn’t work nearly as fast on her task as she did in one of this year’s other Marvel pictures.

Captain America (Chris Evans, Captain America, Gifted, The Winter Soldier), also known as Steve Rogers, has been thoroughly de-Americanized. I vaguely wondered why he’d gone shaggy. No one explains why. I noticed his Robinson Crusoe facial hair during the climactic battle. At this point, I started to realize that it doesn’t matter. This is a Marvel movie; spectacle without introspection is the point.

Avengers: Infinity War is cute. Cuteness abounds. In my screening, fan reaction interfered with the experience and I missed certain lines, which were also probably cute. I did hear one character say: “You are in Wakanda now” and noticed that Captain America and other avengers and their allies wear no helmet, which strikes me as a serious gap in logic even for a movie this random and preposterous. All that combat ballet and no one thinks to aim for the head.

But in a film in which lines about “random genocide” and “dispassionate mass death for rich and poor alike” come after and before the latest wisecrack, I can’t rightly expect logic, let alone that sense of knowing but wide-eyed wonder. Avengers: Infinity War is this side of jaded and it’s ploddingly contrived.

The primary contrivance is that mass death looms over the whole movie, as if there’s not enough of that in reality. If that makes Avengers: Infinity War sound enticing for your money, go for it. Know that it comes packaged with the fate of the universe resting on the efforts of an Olsen twin playing with fire, a pivot point which is as vacant, maybe more so were this possible, as it sounds. Avengers: Infinity War depicts nihilism on a mass, clever and effective scale, with snaps to infinity.