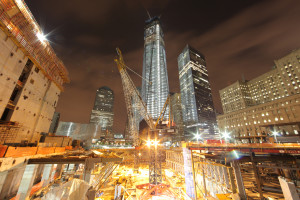 Premiering on the History Channel at 6 pm ET on September 11, Rebuilding the World Trade Center is a 2-hour premiere by Belfast, Northern Ireland, artist and photographer Marcus Robinson as he films, draws and paints the rebuilding using 13 cameras in time lapse photography. Interspersed with on-camera interviews with several construction workers, the cumulative effect is sparse, haunting and, at its best, elegiac.

However, there is no mention of what necessitates a rebuilding: an act of war by those moved by Islam. There is no explanation of the four buildings which will comprise the new World Trade Center, no recap of history of the previous, fallen World Trade Center (1973-2001), which was attacked by Moslem terrorists in 1993 and destroyed by Moslem terrorists in 2001 murdering 3,000 innocents who were mostly American. Rebuilding the World Trade Center also omits any detailed tutorial in the architecture, design, construction, politics and process. The program, which airs in color with eerie music, time lapse filming of the construction and individual straight-on camera interviews with workers, assumes a great deal of foreknowledge about the project.

A concrete carpenter is the only worker to imply a reference to the act of evil which permeates this appropriately melancholy telefilm, referring to “planes hitting the Twin Towers” which could be construed as an accident if you don’t know what happened 13 years ago. Most of the workers tell their tales in affecting, occasionally powerful, segments about the challenging work of building new towers high above Manhattan. One man speaks of losing a loved one on 9/11. One worker talks about becoming an iron worker after 9/11 in order to rebuild. One talks about a relative who worked on building the original towers. The net effect is a salty slice of New York City life, complete with thick accents, attitudes and that unmistakable sense that Manhattan represents the best of everything.

For example, another concrete carpenter, Estelle St. Clair, talks about the “danger and seriousness” of her work and how what she calls the “pure joy” of seeing and shaping New York’s skyline is her highest reward. This is the best aspect of Rebuilding the World Trade Center. The paintings by Robinson punctuate the program amid what amount to exhibitions of workers’ unions’ cronyism and nepotism – the film skips an entire year – as the workers talk about the pressure of the project without any reference to dates of completion (rebuilding starts in 2006) and the cause of delays or whether the project is successful in terms of design.

As the spire is assembled, for instance, there’s no mention of its purpose. Answers are absent on why the rebuilding is taking so long, whether there have been any accidents, injuries or deaths or what New Yorkers think of the newly emerging center if they think of it at all. Sadness hangs over every piece of metal, especially for those who think America’s the greatest country ever to exist on earth and that the Twin Towers should have been rebuilt better and taller. But the variety of workers – ethnically diverse New York-area Indians, blacks, Jews and women – are a melting pot of proud, outspoken individualists and this moody if incomplete telefilm gives a glimpse of Americans who embody the best of what the enemy hates about the West and its infidels. Final scenes include shots moving and looking skyward up the building like the last scene from The Fountainhead (1949) and, when a worker speaks with awe of being able to almost see the curvature of the earth, it is impossible not to think of three thousand ghosts and their last day on earth.