The Drake Hotel is located on Chicago’s Gold Coast at the start of what’s known as Magnificent Mile. For years, I noticed it primarily and prominently as the landmark that proudly stood just off Lake Shore Drive as the road curves around Lake Michigan at Oak Street Beach and one enters the city, with its towering skyscrapers from the John Hancock Building to what were once known as the Standard Oil Building and Sears Tower, from the north. The Italian Renaissance style building was a solid, sturdy presence that stood 13 stories high under tall, elegant calligraphy letters that simply announced: The Drake. Now I know (and only partially) what I never knew before I’d entered: The Drake is a grand hotel. 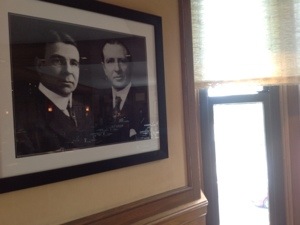 It was envisioned by a self-taught, self-made architect named Ben Marshall (1874 – 1944) in the year 1917 and it opened on New Year’s Eve of 1920 – the March 1921 issue of The Economist promised readers that the structure would be “of unusual magnificence, [and that] nothing like it in appearance, arrangement or finishing had ever been attempted in this country…” – after being funded by the sons of an innovative hotel businessman named John Burroughs Drake, who’d been known for his ability. The Drake sons, John and Tracy, pictured in the frame at right, built flamboyant Ben Marshall’s hotel.

The Drake Hotel originally cost $10 million to build. There were 800 rooms served by 900 hotel employees (now there are over 500 rooms in the hotel, which is owned by Hilton Hotels). The design features the first three floors of ballrooms and other “public” spaces and the upper ten stories in the shape of a ‘H’ in a “piano nobile” application of 16th century Italian architecture. The result is described rightly by hotel historians as a balanced, formal composition of restrained detail influenced by palaces in Florence and Rome. Made of smooth limestone and overlooking the famous Chicago road, parks, beaches, buildings and lake, The Drake sits like a grand guard at the entrance of the entire city, affording a wide, generous view of the lake. 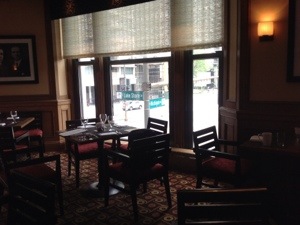 Drake Bros. restaurant at the Drake Hotel. © Copyright 2013 Scott Holleran. All rights reserved. May not be reproduced without the permission of Scott Holleran. 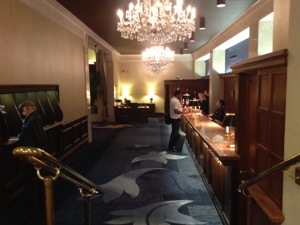 During a recent stay at the nearby Westin Michigan Avenue for an arts and philosophy conference, I went for several daily walks along the streets and avenues and, one day, I decided to visit the Drake. I merely wanted to peek at the lobby and, expecting some dusty old palace, I was taken away. Entering on Walton Street, its official address named after the architect’s wife, Elizabeth Walton, I was surprised at its accessibility and lack of formality. There was no doorman. There was hardly anyone in the entrance at all. I found a dark and somewhat mysterious corridor to the left – more on that later – a dark bar to the right and some stairs straight ahead. I walked up and discovered the lobby, pictured here below, and much more to explore. There were more stairs, a bank of elevators – one of which I would later ride and find inside a cushioned place to sit – a front desk to the side (also pictured here) and, up the stairs to the left and around the Palm Court with the water fountain down another passageway, a restaurant simply called Drake Bros. The hour was a bit past breakfast, though it was also premature for lunch, so I wandered inside the dining room and found a table, seen above at left, overlooking the intersection of Michigan Avenue and East Lake Shore Drive and much more, so I settled in and ordered bacon and eggs and a cup of coffee. Everything was delicious. Service was excellent. The cost was reasonable. The view was typical Chicago: cloudy, gray and waves coming over the sand. 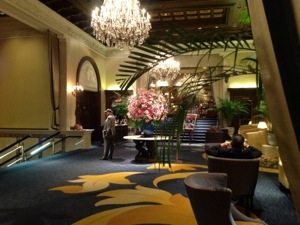 The property has an amazing history. Host to Sinatra, Marilyn and Diana and dozens of movie stars, presidents and industrialists, the Drake continues to attract guests who seek the best and it’s easy to see why. Designed by an architect with no formal education, owned by a family that lost the hotel during the 1930s Depression (they got it back), it is a fascinating place to explore. After my meal, I ventured down another set of stairs and down a corridor to find a row of luxury boutiques and shops – see the display window below for a sense of the Drake’s attention to detail – from Chanel and fine jewelry to a bright red cafe (also pictured) and hotel gift shop. I didn’t have time to see the rooms or suites and one day I’d like to be a guest but I did come back after dinner with a friend for dessert and drinks for the free jazz performance, presented by Chicago’s Jazz Institute, in the Palm Court. Again, everything and particularly the waiter’s service was perfect. It’s rare to experience perfection and even rarer these days to find it where one might have reason to expect it most. I’m glad I finally went inside the Drake, which feels at once safe, rich and a little bit daring, too.

Exterior view from park in front of the Drake. © Copyright 2013 Scott Holleran. All rights reserved. May not be reproduced without the permission of Scott Holleran.

Cafe in the corridor at the Drake. © Copyright 2013 Scott Holleran. All rights reserved.