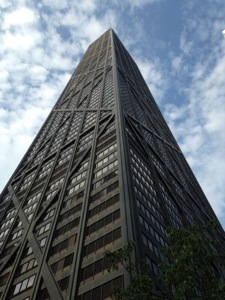 John Hancock Tower on Michigan Avenue’s Magnificent Mile in Chicago is a grand achievement. It moves with the wind. I’ve been up on top at the bar, observatory or restaurant many times and this summer’s visit—I was staying across the street at the Westin Michigan Avenue—was as exciting an experience as when I first visited the top of what was once Chicago’s tallest skyscraper shortly after it opened for business in 1970.

It’s a building that rises high above one of the few surviving structures from the 19th century’s Great Chicago Fire, the city’s water tower, made of Joliet limestone and symbolizing a contrast that captures the best of Chicago’s spirit: strong, solid, sharp, hardworking, defiant. Also at ground level around the Hancock tower is another commercial building, Water Tower Place, which fits the Michigan Avenue Magnificent Mile model of unabashed capitalism. In fact, the skyscraper was built and owned by a big business: the John Hancock Mutual Life Insurance Company.

Like that enterprise, Michigan Avenue’s stores, companies and hotels are great, American symbols of freedom, capitalism, innovation, industry and wealth: Bloomingdales, Chicago Tribune Tower, Walgreens, The Drake Hotel and the tall, black, cross-beamed tower that represents big business and an American founding father at once. Never mind that the Hancock tower’s anchored by a generic Best Buy now in a city ruled by a Clinton-Obama crony in a city known more for nightly mayhem and murder—with this once-magnificent mile itself assaulted by roaming thugs—than for the freedom to create, assess for risk, insure, build and make money. Chicago, where Ayn Rand once lived on the city’s south side and was enthusiastically received by her largest audience in 1963 for a speech on America’s persecuted minority—big business—has been transformed into a thick, government-run cartel by Big Government types empowered by a former church and community activist who became president named Barack Obama. 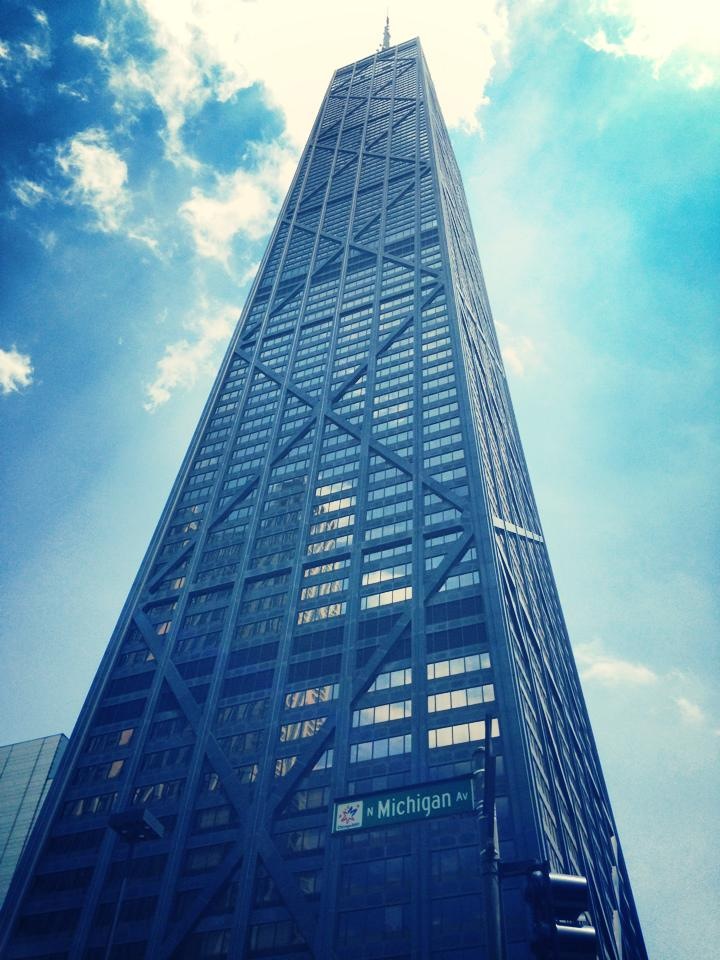 The tower still stands. From the skyscraper’s Web site:

Construction started on May 5, 1965 and was completed on May 6, 1968. The architectural firm is Chicago’s Skidmore, Owings & Merrill and the building is designed by architect and design partner Bruce Graham with Chief Structural Engineer Fazlur Kahn. The building contains 897,000 square feet of office space, 172,000 square feet of retail space, 17,371 square feet (on the 94th floor) for the observatory (admission costs $18; $12 for kids, children under 3 are admitted for free) and it comes with a 34,307 square-foot facility for broadcasting. There are 49 floors of residential condominiums. The John Hancock Building cost $100 million at the time of construction and took approximately 36 months to build.

The observatory is open from 9 am to 11 pm every day, 365 days a year (last ticket sold at 10:30 pm) and I recommend if you have time for only one that you head for the skyscraper’s bar, The Signature Lounge, instead to save money – drinks are expensive but you can sit, have a beverage or some food and enjoy the view of up to four states, lots of flat land and Lake Michigan for miles and miles. Ask for Virginia if she’s working; she’s the best skyscraper waitress in town as I recently discovered. There’s a fine dining restaurant, too, which I’ve patronized in the past and it was just OK. I prefer dining at the top of the Standard Oil Building (now named Aon Center) on Randolph but that’s another skyscraper. I have been to the top of the Sears Tower (now named Willis Tower) in the winter but it’s not my favorite building. 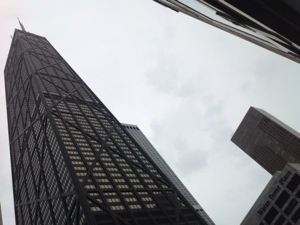 I grew up in and near Chicago, taking residence at various homes on School Street, Eddy Street, on Chicago Avenue in Evanston and in Wilmette. I used to take the El—the Skokie Swift, the Evanston Express, every train on the city’s downtown and northward—to work near Old Orchard, the Apparel Center across from the Merchandise Mart, a building on Jackson near Sears Tower and I’ve danced on stage at Park West, the Vic, Cabaret Metro and Neo and nearly frozen my tail off waiting at all hours at every El platform hitting those useless heating buttons in years gone by. I wrote my first articles on assignment in Chicago. Went to my first sports games there, getting crushed on opening day at Wrigley Field and putting up with drunks in the bleachers and getting my wallet stolen at Comiskey Park when I went to see the White Sox. I’ve been lucky to have lived in Chicago and I still love it. The city I’ve loved is on its way out (same as the country) but intelligent, friendly, decent, hardworking people—and great buildings—do exist. They’re in Chicago to look up to. The more reason one has to look down, the more reason to seize the moment and look up. And, here, for now, is Chicago’s John Hancock Tower.