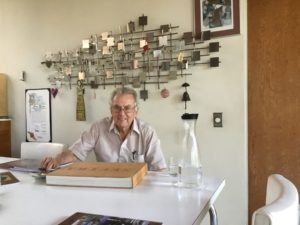 Nestled in the hills of Los Angeles is a uniquely compact and inviting home where I first met Dion Neutra. I had spoken with and interviewed the noted architect, who studied and worked with his father, the late Richard Neutra, a few times for articles about modern architecture. The prospect of an extensive interview had previously been discussed though it hadn’t been conducted. This time, when Dion Neutra suggested that we meet for an interview, it was promptly scheduled. I drove to LA’s Silver Lake neighborhood, parked and climbed the steep stairs. I soon met the man who made with his father some of America’s most distinctive and iconic homes and buildings. We sat in a dining room and talked for over an hour. Days later, we would toast to his 90th birthday and, later, talk again about a campaign to restore one of his father’s signature buildings, the Eagle Rock Clubhouse. During our exchange, we managed to cover a lifetime of memories, thoughts and details of his father, meeting Ayn Rand, Frank Lloyd Wright, the Kun house, World Trade Center, Neutra’s Gettysburg Cyclorama and his childhood trauma in Silver Lake. I knew from previous talks that Neutra’s son and heir could be both eccentric and exhausting. This conversation is no exception. Read my exclusive interview with Dion Neutra. 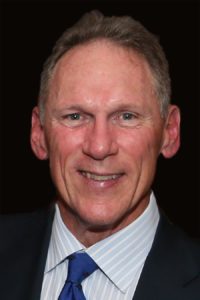 Another inheritance-themed opportunity for an exclusive talk recently presented itself when the Ayn Rand Institute (ARI) named a new CEO. His name is Jim Brown and his background is in business, financial analysis and military leadership. Qualifications alone merited my interest and I immediately welcomed him to the ARI and asked for an interview, which he kindly granted at his Irvine office. Though days into the job, he discussed plans, management philosophy and his favorite Leonard Peikoff works. As an Objectivist who first visited the ARI as a teen when I took the bus to its office on Washington Boulevard in Los Angeles, who has worked and studied with the ARI, I want my readers to read the interview and consider supporting the ARI under Jim’s new management. An edited transcript of my conversation with the center for Objectivism’s chief executive officer—Jim Brown’s first interview as ARI’s chief executive officer—appears on Capitalism Magazine (postscript: read a shorter version in the Los Angeles Times here).

And I am delighted that my favorite filmmaker—director Lasse Hallström—granted to me his only interview about his successful motion picture, A Dog’s Purpose, before returning to making Disney’s adaptation of the beloved Christmas ballet The Nutcracker. I am often enchanted by Mr. Hallström’s work. I always anticipate whatever he chooses to make. And I am privileged to have interviewed Lasse Hallström before. This time was particularly rewarding. 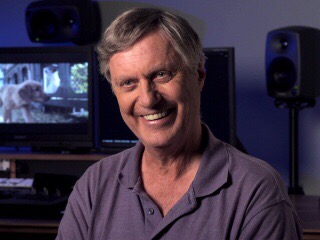 Lightness in his pictures is perhaps the most indelible quality. Think of the French village in Chocolat or Venetian escapades in Casanova. The way he guides an ensemble cast to perfect union for an exalted or higher cinematic goal—around foodmaking in The Hundred-Foot Journey, liberation in What’s Eating Gilbert Grape, serenity in An Unfinished Life, healing in The Shipping News, and the power of a dog to align man to what’s here and now in A Dog’s Purpose—should also be known. All of his movies, which began with his film about ABBA, are wonderfully musical including A Dog’s Purpose. But what, besides unity, love and lightness, is more pressing and relevant now than the seriousness with which he films his stories? This unique blend by a Swede who lives in America is often mistaken strictly as sweetness, which one should expect in a circus culture of cynics, celebrities and smears. The interview with Lasse Hallström, the artist who to me best expresses in today’s movies the American sense of life, is one I know I’ve earned and deserve.